What cannabis actually does to your brain - io9 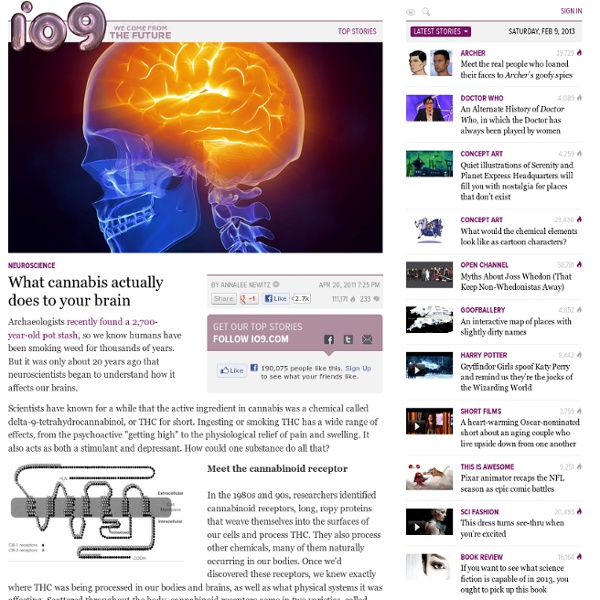 Chances are they would've ended up brainless morons with or without the pot. It's quite frankly not strong enough of a narcotic to destroy one's life such as you describe. It's very dependent on the user's persona. @Tadashii: Are you also for alcohol and tobacco prohibition? Those ruin more lives every year then marijuana has ever. Wow- Tadashii, pot is not meth or cocaine. Yes, its a chemical that can intoxicate and has been embraced by, and been the cause of some lazy folks, underachievers, and Grateful Dead fans not amounting to much. Pot is like anything else- tobacco, alcohol, vicodin, valium, caffeine, etc. Cannabis has great promise for any treatment that requires appetite stimulant (such as cancer, HIV, etc), and has also been found to act as an anti-inflammatory or nausea reliever, Don't just stamp marijuana "evil". Do you enjoy any caffeinated sodas, cigarettes, or the occasional alcoholic beverage? Yes I am against alcohol too and I agree that it's worse than pot.

Related:  The human brain and the mind • shouldathot

Rare but Real: People Who Feel, Taste and Hear Color When Ingrid Carey says she feels colors, she does not mean she sees red, or feels blue, or is green with envy. She really does feel them. She can also taste them, and hear them, and smell them. The 20-year-old junior at the University of Maine has synesthesia, a rare neurological condition in which two or more of the senses entwine. Numbers and letters, sensations and emotions, days and months are all associated with colors for Carey. The letter "N" is sienna brown; "J" is light green; the number "8" is orange; and July is bluish-green.

How To Make Money in Your Spare Time Doing Simple Online Tasks via: Lifehacker Many “online jobs” promising quick riches and little effort are really scams. While the tasks below won’t make you rich, they can earn you a little pocket money on the side—and these days that can make a big difference.

Miracle Drug At Cambridge over the summer, many students were taking pills to help their concentration. Ed Cumming was among them ... From INTELLIGENT LIFE Magazine, Autumn 2009 Sociobiology: The New Synthesis Sociobiology: The New Synthesis is a book by E. O. Wilson that helped start the sociobiology debate, one of the great scientific controversies in biology of the 20th century (see Criticism of evolutionary psychology). Wilson popularized the term "sociobiology" as an attempt to explain the evolutionary mechanics behind social behaviors such as altruism, aggression, and nurturance. The fundamental principle guiding sociobiology is that an organism's evolutionary success is measured by the extent to which its genes are represented in the next generation.[1]

Synesthesia How someone with synesthesia might perceive (not "see") certain letters and numbers. Synesthetes see characters just as others do (in whichever color actually displayed), yet simultaneously perceive colors as associated to each one. Synesthesia (also spelled synæsthesia or synaesthesia; from the Ancient Greek σύν syn, "together", and αἴσθησις aisthēsis, "sensation") is a neurological phenomenon in which stimulation of one sensory or cognitive pathway leads to automatic, involuntary experiences in a second sensory or cognitive pathway.[1][2][3][4] People who report such experiences are known as synesthetes. Difficulties have been recognized in adequately defining synesthesia:[5][6] many different phenomena have been included in the term synesthesia ("union of the senses"), and in many cases the terminology seems to be inaccurate.

Hmm sounds like a plan ! ;-) That reminds me I took some Vodka soaked some high quality bud in it for a few days put the liquid in a tray let it evaporate slowly at room temp . What remained was put THC ! It looked like such a tiny amount . I thought I'll just put a little in and light up ! BAM !!! Talk about instant face to floor ! ;-O OMG ! I'll never do that again ! I had super high tolerance back then and it Kicked My ASS ! by mirlen101 Jul 24

hehe, yeah im from norway so thats what he used, first you would need like 96% moonshine, then put a 5g bud in ca 300ml liquor, store it for three weeks, shake from time to time, filter it, then mix in water to make it like 20 to 30%. and then it should work fine by mrperrific Jul 24

Yah but you don't really get anything from the booze except taste. You might with Moon Shine but you would probably just explode ! ;-O So best to have a not so great friend try it first ! Just keep a fire exstinguisher handy ! ;-) by mirlen101 Jul 24

hehe lol, yeah i heard it from a friend as well that you could do that with vodka, and it would get you both drunk and stoned, with a surprisingly good taste. would be nice to try once, too bad big liquor companies cant make this in big scale by mrperrific Jul 23

dont think you could, but it would be nice if buds were like a good cognac, better with age :D by mrperrific Jul 21