How to Stop Mumbling and Speak Clearly 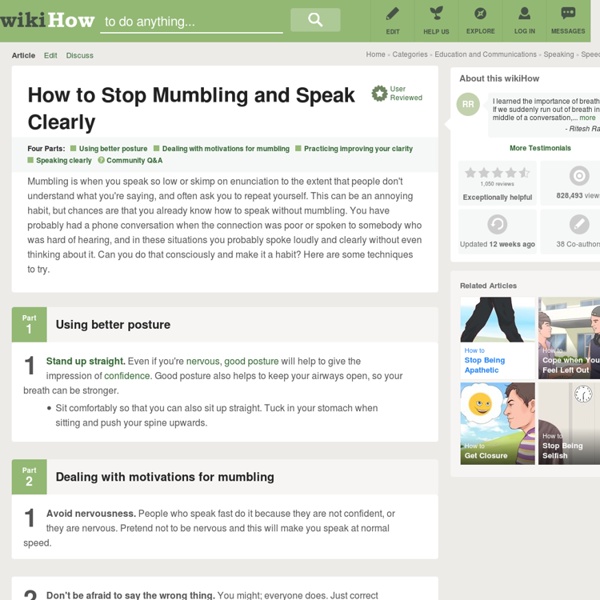 User Reviewed Four Parts:Using better postureDealing with motivations for mumblingPracticing improving your claritySpeaking clearlyCommunity Q&A Mumbling is when you speak so low or skimp on enunciation to the extent that people don't understand what you're saying, and often ask you to repeat yourself. This can be an annoying habit, but chances are that you already know how to speak without mumbling. You have probably had a phone conversation when the connection was poor or spoken to somebody who was hard of hearing, and in these situations you probably spoke loudly and clearly without even thinking about it. Can you do that consciously and make it a habit? Ad Steps Part 1 Using better posture 1Stand up straight. Part 2 Dealing with motivations for mumbling 1Avoid nervousness. Part 3 Practicing improving your clarity 1Listen. Part 4 Speaking clearly 1Open your mouth wider as you talk. Community Q&A Add New Question I mumble and my mouth fills with saliva when I speak. Ask a Question Tips Article Info

Ezra Cornell Ezra Cornell (January 11, 1807 – December 9, 1874) was an American businessman and education administrator. He was the founder of Western Union and a co-founder of Cornell University. He also served as President of the New York Agriculture Society and as a state Senator. Birth and early life[edit] Marriage and early career[edit] On February 24, 1832, Ezra Cornell wrote the following response to his expulsion from The Society of Friends due to his marriage to Mary Ann Wood: I have always considered that choosing a companion for life was a very important affair and that my happiness or misery in this life depended on the choice… Telegraph[edit] Happening into the offices of the Maine Farmer in 1842, Cornell saw an acquaintance of his, one F.O.J. Cornell was a Republican member of the New York State Assembly (Tompkins Co.) in 1862 and 1863; and of the New York State Senate from 1864 to 1867, sitting in the 87th, 88th, 89th and 90th New York State Legislatures. Cornell University[edit]

Cycling in Chicago History[edit] Early bicycles arrived in Chicago in the 1860s. By 1900, there were 54 bicycle clubs with more than 10,000 members.[1] Bicycle advocacy has been present in Chicago since the early days of the city. In the 2000s, Chicago roads and trails saw an increase in the number of bicyclists.[2]This can, in part, be attributed to mayor Richard M. The Council created the Chicago Department of Transportation Bike Program, a multi-million dollar program funded primarily by Federal CMAQ funds,[4] in order to achieve this end. Bikes and transit[edit] Most CTA rail stations have indoor, outdoor or outdoor sheltered bicycle parking. Bike Share[edit] Divvy, a Bicycle sharing system, is set to launch Summer 2013 with 4,000 bikes at 400 stations throughout the city.[10] Facilities[edit] The City of Chicago publishes a Bike Lane Design Guide. The McDonald's Cycle Center in Millennium Park was opened on July 16, 2004 just east of the Pritzker Pavilion. Organizations[edit] Events[edit] References[edit]

31 Quotes That Will Give You Chills I think quotes have a powerful way of conveying an attitude to you which sometimes resonates so much that you feel ‘chills’ inside. Here’s a list of the quotes which have given me the most of these “chills”. Enjoy! Some people die at 25 and aren’t buried until 75. —Benjamin FranklinMost people are other people. Paul Cornell (lawyer) Born in Upstate New York,[2] Cornell was from a distinguished New England family, and was a cousin to Ezra Cornell, founder of Cornell University.[3] When his father died (he was 9 at that time)[4] the family moved to the Adams County, IL/Schuyler County, IL area,[2] where he worked as a farmhand to pay for schooling.[4] He passed the Illinois bar examination and moved to Chicago in 1847.[2] Unfortunately, his entire savings was stolen from his hotel room on his first night in town.[2] A sympathetic lawyer provided him with both a loan and a job at the law office of Skinner and Hoyne, where he met Senator Stephen Douglas. Paul Cornell's Estate at the current corner of 51st Street (East Hyde Park Boulevard) and Harper[7] Paul Cornell specifically forbade heavy industry development in Hyde Park.[14] This philosophy later became a part of the Burnham Plan. Hyde Park Hotel in 1910 Hyde Park Hotel in 1927

We paved paradise - Global warming In Tippecanoe County, Ind., there are 250,000 more parking spaces than registered cars and trucks. That means that if every driver left home at the same time and parked at the local mini-marts, grocery stores, churches and schools, there would still be a quarter of a million empty spaces. The county’s parking lots take up more than 1,000 football fields, covering more than two square miles, and that’s not counting the driveways of homes or parking spots on the street. In a community of 155,000, there are 11 parking spaces for every family. Bryan Pijanowski, a professor of forestry and natural resources at Purdue University, which is located in Tippecanoe, documented the parking bounty in a study released this September. That’s the paradox of parking. Despite all the environmental evils blamed on the car and its enablers — General Motors, the Department of Transportation, Porsche, Robert Moses, suburban developers — parking has slipped under the radar. It’s a self-perpetuating cycle.

Life is a game. This is your strategy guide 682k shares Share on Facebook Share on Twitter Real life is the game that – literally – everyone is playing. But it can be tough. Basics You might not realise, but real life is a game of strategy. Most importantly, successful players put their time into the right things. Childhood Life begins when you’re assigned a random character and circumstances: The first 15 years or so of life are just tutorial missions, which suck. Young adult stage As a young player, you’ll have lots of time and energy, but almost no experience. This is the time to level up your skills quickly. Now that you’re playing properly, your top priority is to assign your time as well as possible. This may sound simple, but the problem is you won’t always know what tasks to choose, and your body won’t always obey your commands. How to obey your own commands Many players find that when they choose to do something – say “go to the gym” – their body ignores them completely. This is not a bug. Keep your state high. Where you live

Vote with Your Feet clean sweep assessment Are you ready to clean up your life? The Clean Sweep Program is a checklist of 100 items which, when completed, give one complete personal freedom. These 100 items are grouped in 4 areas of life with 25 in each group: Physical Environment, Well-being, Money and Relationships. These 4 areas are the cornerstone for a strong and healthy life and the program helps a person to clean up, restore and polish virtually every aspect of his/her life. Objective The participant's goal is to get a score of 100 out of 100. Promise The Clean Sweep Program promises three things will happen as you increase your scores: You will have more energy and vitality. Instructions There are 4 steps to completing the Clean Sweep™ Program. Answer each question. Scoring: Add your totals from the four sections. Important Points: This program is part of establishing a Strong Personal Foundation.

Shitty Neighborhood Rallies Against Asshole Developer | The Onio CHICAGO—Residents of the Carney Gardens neighborhood on Chicago's South Side are opposing an effort by asshole real-estate developer Royce Messner to build a godawful $45 million strip mall and condominium complex in the crime-ridden shithole they call home. Enlarge Image Residents march to protect their beloved, execrable squalor. The Save Carney Neighborhood Foundation, the most organized non-criminal group in this part of town, has filed a lawsuit in federal court to block the scheduled April 2008 groundbreaking. While halting the project would surely prevent a tragic urban-planning nightmare, it would also mean keeping the run-down, economically depressed community exactly as it is. "Carney is where I was born and raised, and it remains a tight-knit community," said Foundation chairman Althea Hynes at a fundraising block party held Monday on a broken bottle- and condom-strewn stretch of Carney Avenue where the money-grubbing Messner wants to put a soulless indoor food court.