10 Wise Choices to Skyrocket Your Happiness 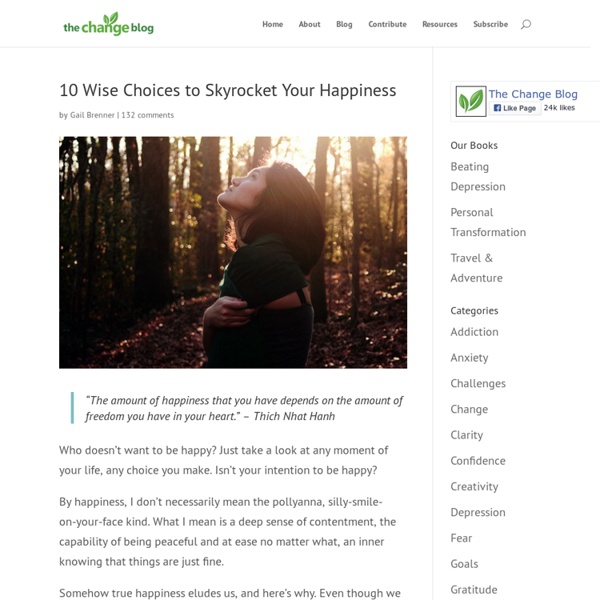 “The amount of happiness that you have depends on the amount of freedom you have in your heart.” – Thich Nhat Hanh Who doesn’t want to be happy? Just take a look at any moment of your life, any choice you make. Isn’t your intention to be happy? By happiness, I don’t necessarily mean the pollyanna, silly-smile-on-your-face kind. What I mean is a deep sense of contentment, the capability of being peaceful and at ease no matter what, an inner knowing that things are just fine. Somehow true happiness eludes us, and here’s why. Happiness is absolutely within your reach. 1. Don’t blame others, turn yourself into a victim, or wait for someone to come and save you. 2. Be willing, open, courageous, and humble. 3. Nothing kills happiness more quickly than old hurts, resentments, and grudges. 4. The cause of unhappiness is the playing out of conditioned habits that don’t serve you. 5. We unknowingly build our lives around distorted beliefs and expectations. 6. 7. 8. 9. 10. Are you happy?

Related:  To be sorted

How to Fight Depression and Anxiety What's the best way to deal with depressiona and anxiety? Quickly and definitively. Whatever kicks them off, depression and anxiety both are maintained by styles of thinking that magnify the initial insult and alter the workings of the brain in such a way that the longer an episode exists, the less it takes to set off future episodes. ZZE.ST - inspiration & lifehacks to make life better Throughout last couple of years I’ve been collecting my personal favorite quotations from various inspirational people in my Evernote. As a result I got quite a long list of sayings which I personally consider to be one of the smartest, wittiest, daring and positive at the same time. Moscow, 2008.

The Dalai Lama’s 18 Rules For Living May 6, 2011 | 42 Comments » | Topics: Life, List At the start of the new millennium the Dalai Lama apparently issued eighteen rules for living. Since word travels slowly in the digital age these have only just reached me. Here they are. Take into account that great love and great achievements involve great risk. I deeply hate this world.. 1st, know you're not wrong. You are being brainwashed, but it isn't quite as intentional or sinister as you might think. Society creates a framework so that future generations can grow up and support that framework. It may sound awful to you, but if such a system weren't in place, there would be too many elements in society pulling in too many directions and it wouldn't grow.

Workout Program for People that Hate Working Out The idea for this workout program dawned on me the other day as a way to slowly (very slowly) get into a fitness routine that you are meant to keep going the rest of your life. We are discussing our progress, challenges and successes in the comments below if you would like to join us! I was sick of training schedules and programs that were so extreme I could only keep them up for a few weeks or days before collapsing under the time or mental pressure. I mulled the problem over for a while and thought: “If I had to come up with a workout program that I kept doing for the next 5 years… what would it look like?”

The 21 Day Challenge Everyone Should Take I'm on day 14 of a 21-day challenge that I semi-invented and so far I have to admit the results have been nothing short of amazing. Now, when I say that I semi-invented it, that is purely because I took the idea from the excellent book 'Psycho Cybernetics' and put it in a format that everyone can follow, myself included. I'm not exaggerating when I say this challenge can literally help with any aspect of your life that you would like to improve. Before I go into more detail on how you can follow along, I need to talk a little about our 'self image' and why it is very important.

Is Depression a Legitimate Disability? I just read an op-ed piece written by a doctor in which he discusses why he feels it would be better for people with depression to be forced to work rather than allowed to go on disability. The crux of his argument seemed to be that when he was a junior doctor he lived next door to some young men who were on disability for depression yet they were able to get out in the yard and play football. The more I read of his article, it became clear to me that he was, in fact, jealous because he was working hard learning to be a doctor so he could treat these people who seemed to be living the easy life, drawing a check from the government, even though they were not really debilitated enough, in his opinion, to be disabled. Reading this article, it occurred to me that depression doesn't get the respect that it should because it is an invisible illness.

Top 100 Personal Development Blogs Personal development can affect all aspects of your life, from controlling your negative thoughts to gaining the self-confidence to excel at work. If you’re in need of some inspiration to get you on the right road to improving yourself, the Internet is full of blogs that can offer guidance, advice and support to aid you in your journey. We’ve brought together 100 here, in no particular order, to help you get started. Must Read These are some of the most popular personal development blogs out there, so make sure to add them to your bookmarks.

Breaking habits of perception-a skill that changes everything « Metta Refuge Here is another great teaching from Thanissaro Bhikkhu. While looking for some buddhadharma about dealing with guilt about the past, I came across this paragraph, from the end of his article, “Habits of Perception.” It was so helpful, I stopped my search to read the whole article, which I share below. May it be an aid to developing the skillful perceptions that lead to freedom!

Panic Miracle™ - Tips For Panic Attack ATTENTION! If You or Someone You Love is Suffering from Panic Attacks or Anxiety, Then This Will Be the Most Important Letter You Will Ever Read... Stop and Prevent All Types of Anxiety and Panic Attacks Eliminate all Types of Phobias and Social Anxieties Feel Confident to Drive, Fly, Travel or Speak in Public Improve the Quality of Your Life Dramatically! 11 Reasons to Stop Dreaming and Start Planning Your Round the World Trip Sign up today for Plan Your RTW Trip in 30 Days and start receiving email lesson plans tomorrow – it’s free! If you’re a traveling family, sign up for the Family Edition of Plan Your RTW Trip in 30 Days. You may never have heard or read the letters R-T-W before.

Colors and their Meanings undefined White Cleanses, purifies, raises vibrations to a higher frequency, appeals to spiritual plane,heals, prophecy,clairvoyance. cycle.aspx.url The word "ruminate" derives from the Latin for chewing cud, a less than gentile process in which cattle grind up, swallow, then regurgitate and rechew their feed. Similarly, human ruminators mull an issue at length. But while the approach might ease cows' digestion, it doesn't do the same for people's mental health: Ruminating about the darker side of life can fuel depression, said Yale University psychologist Susan Nolen-Hoeksema, PhD, in a Board of Scientific Affairs invited address at APA's 2005 Annual Convention. What's more, rumination can impair thinking and problem-solving, and drive away critical social support, she said. In work published in APA's Journal of Personality and Social Psychology, JPSP (Vol. 77, No. 4, pages 801-814), Nolen-Hoeksema and Christopher Davis, PhD, found that although ruminators report reaching for others' aid more than nonruminators, they receive less of it. The rumination-depression link