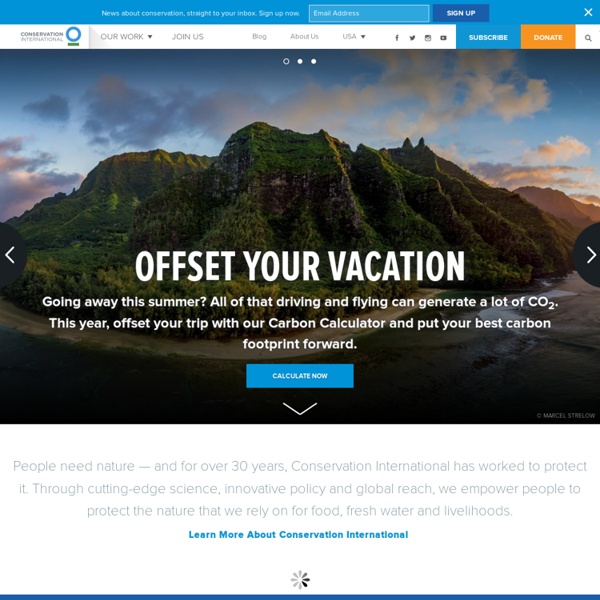 National Geographic Is Ditching Their Plastic Wrapper and Launching a Campaign to Combat Waste! - One Green Planet National Geographic has announced they will be joining in to help save the planet, whose beauty they have captured for decades, by taking action against plastic pollution. The magazine will no longer come in a plastic wrapper, and the organization is launching a multiyear campaign called “Planet or Plastic?” meant to encourage people to reduce their use of plastic disposables. “Can it really be true that half the plastic ever made was produced in the past 15 years?” Editor in Chief Susan Goldberg wrote in an op-ed for National Geographic Magazine.

Living Lawns Loren Byrne scoops up a handful of dirt, sniffs it, and smiles. The organic matter that arthropods eat goes right through them, he explains. That's what gives the soil its rich black color. Species 2000 - About Species 2000 A brief description of the Species 2000 programme Species 2000 is a "federation" of database organisations working closely with users, taxonomists and sponsoring agencies. Memorandum and Articles of Association of Species 2000, 11 December 1997Register of the Members The goal of the Species 2000 project is to create a validated checklist of all the world's species (plants, animals, fungi and microbes). This is being achieved by bringing together an array of global species databases covering each of the major groups of organisms. We calculated how much money trees save for your city Megacities are on the rise. There are currently 47 such areas around the globe, each housing more than 10 million residents. More than half the global population now lives in urban areas, comprising about 3 percent of the Earth. The ecological footprint of this growth is vast and there’s far more that can be done to improve life for urban residents around the world. When it comes to natural spaces, trees are keystone species in the urban ecosystem, providing a number of services that benefit people. My research team has calculated just how much a tree matters for many urban areas, particularly megacities.

Organic Gardening, Modern Homesteading, Renewable Energy, Green Homes, DIY Projects – MOTHER EARTH NEWS Web Image or HOT TOPICS >> • Plastic safety • Cherries • Female farmers • Easter eggs • Partner plants How to Make Fresh Cheese: The Basic Steps Tree of Life Web Project The Tree of Life Web Project (ToL) is a collaborative effort of biologists and nature enthusiasts from around the world. On more than 10,000 World Wide Web pages, the project provides information about biodiversity, the characteristics of different groups of organisms, and their evolutionary history (phylogeny). Each page contains information about a particular group, e.g., salamanders, segmented worms, phlox flowers, tyrannosaurs, euglenids, Heliconius butterflies, club fungi, or the vampire squid. ToL pages are linked one to another hierarchically, in the form of the evolutionary tree of life. Starting with the root of all Life on Earth and moving out along diverging branches to individual species, the structure of the ToL project thus illustrates the genetic connections between all living things.

Coral reefs are in crisis – but scientists are finding effective ways to restore them These are bleak times for coral reefs. Warming ocean waters, disease outbreaks, pollution, sedimentation, careless scuba divers, destructive fishing practices, and a host of other global and local stressors are decimating coral populations at unprecedented rates. If there is any silver lining to these events, it may be that many of the disturbances killing corals are acute: They occur just for a short period of time and then disappear, potentially allowing corals to recover before the next disturbance.

10 World’s Greenest Countries The Environmental Performance Index (EPI) is a method of measuring the performance of national governments related to environmental policies. Yale University and Columbia University release the EPI every year during the World Economic Forum, ranking 163 countries according to 25 indicators. The final mark shows how close the country is to accomplish the environmental goals. Here are the top ten green countries on the list which have made most, officially the greenest in the world. 1. Iceland, 93.5