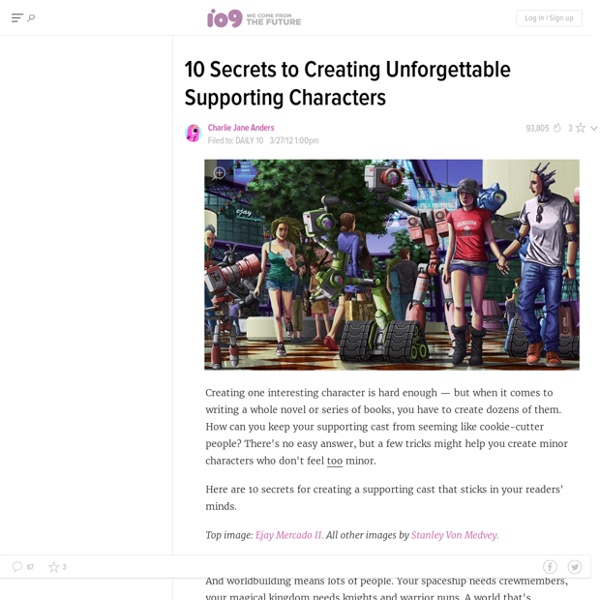 "Admiral Hargroves hated children on page 100, but on page 400 he suddenly likes children." The unspoken danger there is that your character will seem inconsistent—especially with that word "suddenly" there. Sure, real people contradict themselves, contain multitudes, blah blah. But characters are not real people, so the illusion of an arc might need a little more. How about.. "Admiral Hargroves hated children on page 100 and told (main character) that it was stupid of her to recruit the space cruiser operated by child pirates; but on page 400, after the child pirates have demonstrated their skill in battle and loyalty to the imperial cause, he likes children." We don't have to see his internal struggle with his prejudice or hatred. Flagged Excellent point.

6 Ways to Make Sure Your Reader’s Brain Syncs with Your Protagonist’s Brain photo by Andres Musta via Flickr Because here’s the thing: it’s not fiction. It’s fact. Alignments, Allegiances, and Loyalties So, you want to write about a villain who stops being so villainous, and perhaps even becomes a hero? Or do you want to write about a hero who becomes more of a "dark" hero, or even an outright villain? Or a character who just plain switches sides? This is a subject that is often handled badly, with the character progression coming off as forced and contrived. So, here are some tips that should help you write a more plausible shift, whether you're writing an OC for a roleplay or fanfiction or a character for an original work. First, don't think in terms of "good/evil deep inside."

Creating Stunning Character Arcs, Pt. 1: Can You Structure Characters? What if there were a sure-fire secret to creating stunning character arcs? Would you be interested in discovering it? If you care about connecting with readers, grabbing hold of their emotions, and creating stories that will resonate with them on a level deeper than mere entertainment, then the answer has to be a resounding yes! But here’s the thing about character arcs: they’re way too easy to take for granted. On the surface, character arcs seem to boil down to nothing more than a simple three-step process: 1. Plotting, Conniving, and Manipulating Plotters, connivers, and manipulators are a popular character archetype, showing up as villains and heroes alike. The recent Doctors. Loki.

Physical Descriptions - List of Hair Colors Hair Color List (Note: an updated and expanded version of this list appears in my 15K-word book How to Describe Hair and Skin. See below.) [First, my profound apologies to the vast majority of readers who don't steal content, but I have to state the following. This article and all content on this website belongs to Val Kovalin, copyright © Obsidianbookshelf.com, except where noted. Unauthorized use and/or duplication of this material without written permission from Val Kovalin is strictly prohibited. Improve Your Character Writing Look through the eyes of the opposition. By now, you’re probably used to seeing the world through the eyes of your protagonist. Now, try seeing the world and your protagonist through the eyes of characters who disagree with or even outright hate your protagonist. Get in-character as these characters for awhile and grok the world from their POV for awhile. Can you, in the shoes and mindsets of these characters, justify the things you were having these characters do in-story?

Write Better Ensemble Casts Another fine article contributed by J. Avoid homogeny, if possible. It's all too easy to create an entire group of characters who are almost just alike. Whether they're the same race/species or just have the same main interest, they often come out as cookie-cutter clones. Sometimes this is acceptable - characters from a racially homogenous society will likely be of the same race, and characters whose lives center around a club will be interested in whatever that club is about - but unless them being so similar is relevant to the plot or setting, leave it out.

25 Things You Should Know About Character Previous iterations of the “25 Things” series: 25 Things Every Writer Should Know 25 Things You Should Know About Storytelling And now… Writing Masculine Characters There's nothing quite so jarring as reading a male character who speaks and behaves more like a teenage girl. Whether the differences are biological or sociological in cause, there are definitely some common differences in the way males and females tend to speak and behave that (at least at this point in time - in the future, as societal norms change, who knows?) typically need to be accounted for. Please note that I am writing this as a general guide, and not as a guide (let alone a rulebook!)

Character Questionnaires - Get to Know Your Characters Receive more writing tips and advice (along with special offers and other Gotham news). One of the best ways to get to know your characters is to ask questions about them. Many writers do this as a kind of homework before they actually start writing a story. The more you know your characters, the fuller they will be. This might also make your story easier to write. The following questionnaires may be downloaded so you can work with the actual documents. Write Better Chosen Ones In every other fantasy story, there is a Chosen One. Xe can alone defeat the Big Bad and save the universe. Unfortunately, Chosen Ones are incredibly easy to completely bork up. Ask yourself whether you really need a Chosen One If you can restructure your story so that it does not involve a Chosen One, you probably should. The general concept of a Chosen One is considered by many to be a discredited trope, so unless you really need it for your work, try to avoid it.

Character and Characterisation in the Novel How to write convincing characters Characterisation - the task of building characters - isn't easy. But if you're struggling to build characters with real life and vigour, just follow these rules. If you do follow them correctly, we can pretty much guarantee that your characterisation will be just fine! Writing Children One thing I've noticed is that a lot of writers - both amateur and professional - seem to have no idea how children actually behave. Many child characters I've read don't act anything like real children. In fact, I can't help but wonder if many members of the present generation of adults sprang fully-formed as teens or young adults, because they seem to have no idea how children actually behave despite having allegedly being children themselves. Here are some of the most common mistakes: 1.