The 22 rules of storytelling, according to Pixar 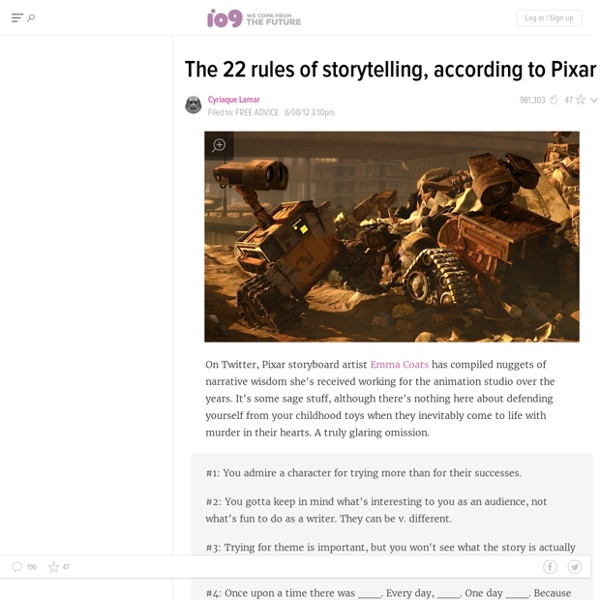 I was going for the polar opposite of Hercules, taking every descriptor and looking for its opposite. But yes, I guess monster would work. Bit cliche, though, innit? It's what people expect, what with Hercules having fought all the monsters. The reason I ask is because I'm writing something with a Herculean character... except she's actually a girl (was tired of guy heroes all of the times forever); in this case, since I'm thinking the opposite of descriptors, "weak guy" is what came to mind, and I really couldn't think of a way in which any opposite of Hercules would be a compelling person. Having her encounter a strong man (Hera/Hippolyta) simply wouldn't be interesting. I've already got certain types of odd characters to mess with, including a king felled by his own hubris (because aww yeah dat hubris, son) whose folly got his son turned into a monster, but I was thinking... straight-up opposite. The impulsiveness, though... that would work quite well. Good post.

The Student Films of 20 Famous Directors We all have to start somewhere. Before they conquered Hollywood, these famous directors made student films. 1. George Lucas // Freiheit The Blackwing Diaries: On Story: No reason to sacrifice character to plot This is a reposting of a Diaries entry from March 2006 that I think bears revisiting. ﻿ Michael Barrier makes some sharp--and challenging--comments about the point of great character animation in his most recent post. He describes his friend, animator Milt Gray, flipping some of Ollie Johnston's animation of "Jock" from Lady and the Tramp, and being startled by the amazingly lifelike performance that sprung off the pages. Barrier continues: Screw the Power Users I designed HomeSite and TopStyle for power users. Only power users would want to edit HTML & CSS by hand, so I made sure to cater to them. Those products were filled with features and tool buttons, and their settings dialogs contained dozens of geeky options. Customers liked them that way. I liked them that way, too.

jimbutcher: The Great Swampy Middle Every writer runs into this, generally in every single book. The middle. It lurks between the beginning of your book and the exciting conclusion, and its mission in life is to Atreyu you right down into the yucky, mucky mire in order to prevent you from ever actually finishing. The Great Swampy Middle (or GSM) knows no fear, no mercy, no regret. It doesn't come after you. It darned well knows that you're going to come to it.

The guide to implementing 2D platformers Having previously been disappointed by the information available on the topic, this is my attempt at categorizing different ways to implement 2D platform games, list their strengths and weaknesses, and discuss some implementation details. The long-term goal is to make this an exhaustive and comprehensible guide to the implementation of 2D platform games. If you have any sort of feedback, correction, request, or addition – please leave it in the comments! Disclaimer: some of the information presented here comes from reverse engineering the behavior of the game, not from its code or programmers. 7 Reasons Why “Melancholia” is the Most Captivating Film of The 2010s (So Far) « Taste of Cinema - Movie Reviews and Classic Movie Lists Lars von Trier’s “Melancholia” is a part of the so-called Depression Trilogy, along with “Nymphomaniac” and “Antichrist”. Another term for the trilogy could be the Despair Trilogy, since various mental illnesses and disorders are depicted in these films. All of them are tied together by the phenomenon of despair, and a sense of hopelessness and frightfulness. The director himself suffered from depression and has firsthand experience with the nature of that particular subject. Leonard Cohen, in an interview discussing his struggling with depression, said that creating art is a victory over suffering, since you cannot think coherently in this condition. We may very well say that this trilogy is a victory over suffering.

The Shot Tells the Story: The Wall-E Wrap Up Yes, I’m alive. Sorry for the delay in this last post, but I was having one of those craptastic weeks where you want to curl up in a ball, shut down your blog and feel like you suck at the very thing you’re trying to teach people about. But I’m better now. Much better. And I won’t be shutting down anything, thank you very much. : ) Criticism and Two Way Streets A post by Jason Fried titled “Give it 5 minutes” reminded me of a great technique I learned about from Bill Buxton. Bill is a Principal Researcher in Microsoft where his main role focuses on designing a company that permits great design to happen. As many have learned to their peril, it’s not simply a case of just dumping talent in a room full of Ikea furniture. In large companies you have to design the process that creates design.

One-Page Plotting One of my writer friends (you know who you are) dared me to simplify a plot worksheet down to one page that would work for all story lengths and genres. Of course I couldn't resist the challenge, so here it is (I plotted John & Marcia's story to demonstrate how to use it): Plot Worksheet Title: Angel’s Darkness Why Crunch Modes Doesn't Work: Six Lessons Why Crunch Mode Doesn't Work: 6 Lessons There's a bottom-line reason most industries gave up crunch mode over 75 years ago: It's the single most expensive way there is to get the work done. by Evan Robinson Executive Summary When used long-term, Crunch Mode slows development and creates more bugs when compared with 40-hour weeks. More than a century of studies show that long-term useful worker output is maximized near a five-day, 40-hour workweek.

La La Land video compares film to classic musicals La La Land is riding high this week after the film scored a record-tying 14 Oscar nominations, and a new video is diving into the cinematic predecessors that inspired Damien Chazelle’s hit movie musical. Edited by Sara Preciado, the clip compares La La Land‘s visuals to those found in various films released over the years, including obvious genre brethren like 1978’s Grease, 1969’s Sweet Charity, 1961’s West Side Story, 1952’s Singin’ in the Rain, and the 2001 song-and-dance extravaganza Moulin Rouge! While the clip highlights La La Land‘s Academy Award-nominated production, costume design, and cinematography as tributaries to classic productions of yesteryear, it also makes the case for unexpected comparisons, especially to Paul Thomas Anderson’s 1997 porn industry drama Boogie Nights — particularly in a segment which splices together footage from both films’ iconic swimming pool scenes. Check out Preciado’s full video (via IndieWire) above.

IPUB100 >>> Storyboarding - Shot Composition - Film Theory - Basic Website Construction Sometimes the results are well worth the effort. Really really worth it, like The Dark Knight or The Incredibles. Sometimes the results are absolutely horrible, like Daredevil or the more recent Iron Man 2 movie. What gives? Clearly they cover the same material. What is it that sets The Incredibles apart from other comic-book style films like the original Superman or Jaws where defeating the bad guy was everything?