How to choose a travel backpack 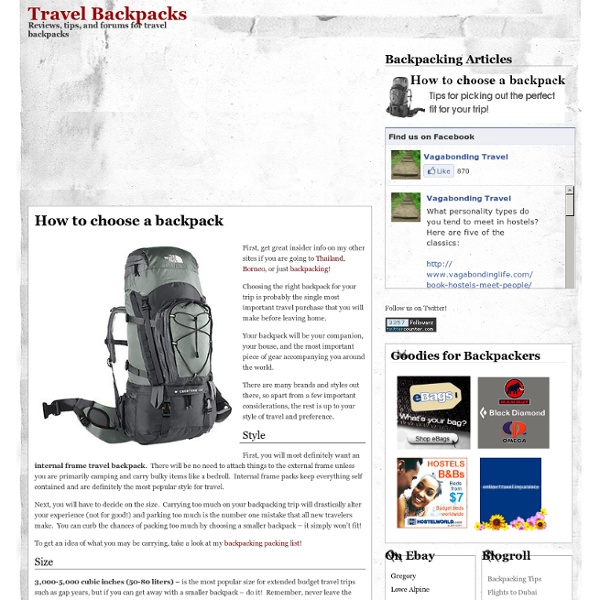 Choosing the right backpack for your trip is probably the single most important travel purchase that you will make before leaving home. Your backpack will be your companion, your house, and the most important piece of gear accompanying you around the world. There are many brands and styles out there, so apart from a few important considerations, the rest is up to your style of travel and preference. Style First, you will most definitely want an internal frame travel backpack. Next, you will have to decide on the size. To get an idea of what you may be carrying, take a look at my backpacking packing list! Size 3,000-5,000 cubic inches (50-80 liters) – is the most popular size for extended budget travel trips such as gap years, but if you can get away with a smaller backpack – do it! Durability The two critical features on any backpack that are most prone to tear up are the straps and zippers. Fit Here’s how to fit a backpack properly: Side or top loading Where to buy a travel backpack?

How to Travel Around the World for $418. “I have to tell you sir, this is easily the most ridiculous itinerary I’ve ever put together,” said the American Airlines operator the other night as I finalized plans for a worldwide adventure that would make Marco Polo blush. “Welp, that makes two of us!” I replied. And just like that, I had committed myself to almost nine months of international travel. Yes, that picture above is my actual itinerary. Beginning this January, I’ll start an epic journey that will take me across four continents, through at least nine countries, and into more than fifteen cities. Oh, and all of these flights are costing me a grand total of $418.36. Warning: I’m totally going to geek out on travel-hacking with this post, so if you have no interest in learning how to travel the world and visit awesome places for dirt cheap, check back in on Monday. This post is also quite lengthy at over 2500 words: grab some coffee, get comfortable, and let me show you how deep the rabbit hole of travel hacking goes. -Steve

24 Tales of Ghost Towns and Abandoned Cities 24 Global Tales of Ghost Towns and Abandoned Cities Article by Urbanist, filed under Abandoned Places in the Architecture category. What in the world could cause an entire city to be abandoned? Some become unlivable due to environmental disasters such as earthquakes and tsunamis to nuclear meltdowns (as with Pripyat, shown below). This Halloween, forget the plastic cape and cheesy costume. Ancient Underwater City Alexandria

The Definitive Guide to Finding Free Wi-Fi Great article. A few caveats, though, that I've found in my personal experiences (of course, these ARE just my personal experiences, your mileage may vary). I've done a lot of air travel this summer, and I have been in a total of ONE airport that had free wi-fi. Everything else was pay-for-access. And the free one was slow as all hell. Al, as awesome as the iPhone tethering hack is, know that it breaks visual voicemail (though once you remove the hack, visual voicemail goes back to normal). Also, I've tried apps like WifiTrak on my iPod touch, and to be honest, it's never helped me at all.

The Luxury Coco Palm Dhuni Kolhu, Maldives « Luxury Furniture, Property, Travel & Interior Design The Luxury Coco Palm Dhuni Kolhu Resort, Maldives Coco Palm Dhuni Kolhu can be found on the private island of Dhuni Kolhu, in the Baa Atoll. Coco Palm Dhuni Kolhu is the ultimate hideaway in the Maldives. Set on a beautiful island, the resort is fringed by white sandy beaches, dressed with luxurious tropical vegetation, and hosts a blue crystal clear lagoon for the enjoyment of a vast range of water sports. Beach villas and deluxe villas have open air garden bathrooms, for showers at sunrise or at night under the stars. The all wood water villas offer extreme indulgence for those who are looking for exclusivity and seclusion. If you fancy a real treat, why not for one evening let Coco Palm organise the 154 square meters of one of the most exclusive suites of the Maldives, with a superb plunge pool, Jacuzzi and direct access to the lagoon. Images courtesy of Coco Palm Resorts About Assif Majid Assif is a freelance British journalist who spends his time between Leeds, Manchester and London.

How to Get Free Wi-Fi at Airports That Charge for Internet Connections Wise Bread Picks If you're stuck at an airport that charges for Internet connections, here's a solution: Go to the gift shop and ask for a a free Wi-Fi pass. That's what happened to me last week. So I charged up the laptop and tried to go online. But while looking at the Boingo pay-now portal, I noticed that there was slot for a promotional code. Minutes later in the gift shop, I saw a stack of "15 minutes Free Wi-Fi" coupons from Boingo. Hmm. The promotional code did not work, but I called the tech support number and the Boingo customer rep offered me a complimentary code that would get me online while I was waiting for my flight. That did the trick. Inquire about free Internet passes at the airport gift shops.

The Traveller’s Medicine Cabinet: 5 Essential Drugs for the Road While out roving you aren’t always (or even often) anywhere near a hospital or pharmacy. But, if you pack these nutritional supplements and natural medications wherever you go, you’ll be able to cope just fine. #1: Kratom The Situation You’re hiking the Appalachian trail in the dead of winter. Suddenly the worst happens; your boot gets caught between two rocks, you lose your footing and tumble to the ground, wrenching your ankle in the process. © Miserlou What It Is A leafy green plant grown mainly in Southeast Asia. Uses First and foremost, Kratom is a powerful painkiller similar to Morphine or Opium. Side-Effects Kratom is mildly addictive, about on par with caffeine. Forms Kratom can be purchased in dried leafy form, as an extract, a resin, or in pill form. Legality Kratom is legal in most of the developed world. #2: Kava Kava Kava Kava A leafy green plant grown throughout the Pacific islands. Kava can help to treat social anxiety or stress, and also works as a powerful relaxant. Oil of Oregano

Google's Free Airport Wi-Fi: Five Ways to Protect Yourself Free Wi-Fi while you're waiting for your flight? Sounds like a great way to save money, and kudos to Google for offering it at many U.S. airports during the holidays. Unfortunately, Google's generosity may also lure identity thieves and nefarious hackers to the nation's terminals to prey on clueless travelers. Public hotspots, which by nature are open and unencrypted, are notoriously insecure. Information you transmit via laptop, smartphone, or gaming device may very well fall into the wrong hands. There are ways to stay safe, however. 1) Configure your Wi-Fi device to not automatically connect to an open network without your approval. 2) If there's a storage device or another PC on your home network, you may have sharing enabled on the laptop you've brought to the airport. 3) If you're conducting business or sharing sensitive information, it's best to use a virtual private network (VPN), which creates an encrypted, private link across a public network.

101 Things To Do Around The World Top 10 Strategies for Surviving Airports and Airplanes Excellent tips, I have a couple others to add to it though. Dress Well: Seriously, this is a huge one. Want to avoid crap in the security checkpoints? Want to get treated a little better? Ever heard the saying "Dress for Success" well, it's true of airline travel too. Two reasons for that - one, suits aren't cheap, if my luggage gets lost at least I'm not out my most expensive outfit. I have personally done experiments on this and regardless, you always get treated better through the whole process if you dress professional. Get Elite: This isn't as hard as it sounds, actually. What happens with Elite? Oh, and having Elite on your boarding pass helps with security hassles, too. Upgrade or Pay Full Fare: Most companies have a policy stating they prefer full-fare coach due to refund-ability. I always upgrade if it's reasonable, and often if you check in online 24 hours before the flight.. it is. Those are my tips, at least.

A Path In The Forest by Tetsuo Kondo The incredibly beautiful "A Path in the Forest" by architect Tetsuo Kondo was a temporary installation in the Kadriorg Park near Tallinn, Estonia. It was part of Tallinn's 2011 European Capital of Culture activities and in particular, part of LIFT11, a festival of 11 urban installations. All other installations in LIFT11 were selected through a design competition, but Kondo was invited to create the Path. It was realized in partnership with the EU-Japan Fest Japan Committee. Kardiorg Park is an urban forest, only 15-minutes' walk from the Old City of Tallinn. While it has some intact treed areas, it is mostly an urban park of man-made structures and tended gardens. With his light touch, Kondo created a 95-meter (311-foot) suspended walkway among some of the park's 300 year-old trees.