Learn How to Code this Weekend - Lifehacker 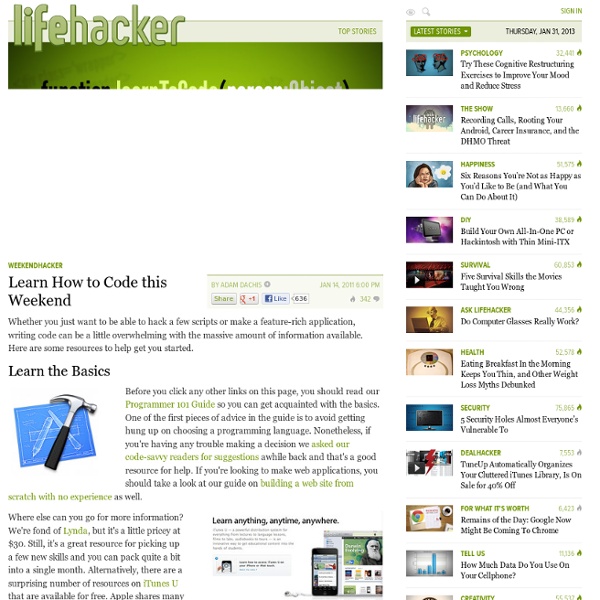 In my past experience, and in helping others to learn Java I have found that the actual language part isn't the real problem. The biggest challenge I encountered, and noticed in others years later, is learning how to think in an Object Oriented way. You really need to learn how to think this way before you code in an OO way. The problem with that is that it is very hard to learn how to think OO without doing some programming. So if you really want to learn to program just pick a language that has a lot of community support and freely available information and start plugging away at it. Notice that you will fail, and if you keep it up you will fail a lot.

Complete list of Facebook Chat Emoticons While playing with Facebook Chat I wondered if it supported emoticons. Turns out it does. But when I tried the >:-) emoticon (a 'devil') and saw it printed as boring text, I wondered, "what smilies does facebook actually support?" So with the help of Safari and some javascript hacking I present to you a complete list of facebook emoticons. smile 5 Great Resources To Learn How To Code However, more often than not, there seems to be a problem of actually finding good content online that can teach you to code. Experimenting with a language can only get you so far. To master it, you need to have proper guidance from people who actually know what they are talking about. So where can you find expert guidance without shelling out a fortune for it? You could start with checking out the websites below:

Fundamental Design of Learning Activities I’ve quoted Richard Buchanan previously in a definition of Design Thinking as “the integration of signs, things, actions and environments that addresses the concrete needs and values of people in diverse circumstances.” Design Thinking offers a set of tools to make sense of “wicked problems” and mysteries, and in this post I attempt to narrate my ideational journey in making sense of learning by digital means, the concept that I call learning experiences, and a notional (but far from complete) model for learning activities designed for individuals to experience. I make this attempt for a number of reasons. Much effort is going into this concept by ADL and, unlike the late 1990s when the Sharable Content Object Reference Model (SCORM) was being developed, there exists an ability to raise the level of awareness for larger audiences that will no doubt be affected over the next 20 to 30 years by the design decisions that are made in the coming months.

The Ultimate Excel Cheatsheet Working with the new Excel 2007 is now more frustrating than ever when it comes to finding the right commands. Sometimes it seems like part magic and part luck. That’s why we’ve put together the cream of the crop of Excel shortcuts in easy to use cheatsheets you can print up and keep handy. Highlighting the most commonly used and commonly looked for Excel commands, this list puts it all at your fingertips. Learn To Code At Any Level With Google Code University Whether it’s for fun, for work, or for something else, programming knowledge is becoming more and more relevant in today’s world. We’re spending more and more time online, so it’s only natural for us to need to have more knowledge of how to build and maintain the sites and applications we know and love. Thanks to Google, in collaboration with schools around the United States, there’s a massive resource for learning how to program and code on the Web. It’s called Google Code University, and is a great place to learn coding and programming, or just to brush up on your skills. GCU is broken into a few different courses ““ AJAX Programming, Algorithms, Distributed Systems, Web Security, and Languages.

Everything you ever wanted to know about C types, Part 1: What's in a type? The C language provides a fairly elaborate system for data types. This series provides an overview of the C type system, as well as some detailed discussions of some of the musty corners people don't normally know about. It is worth learning. As Henry Spencer wrote: A programmer should understand the type structure of his language, lest great misfortune befall him. Contrary to the heresies espoused by some of the dwellers on the Western Shore, `int' and `long' are not the same type. Top 10 Professional Sample Code Websites For Programmers Most programmers are not just desktop programmers, web programmers or scripting gurus – they are often all of the above. Over time, most software developers find that it’s much easier to re-use code components than it is to recreate the wheel every time you write an application. Over time, these developers typically archive a library of these reusable modules in order to save time the next time they need to do the same task. Now, thanks to the power of the Internet, there is a proliferation of websites where professional programmers offer these modules to the general public for absolutely free. For other application developers, these libraries are a goldmine.

Dictionary of Algorithms and Data Structures This web site is hosted by the Software and Systems Division, Information Technology Laboratory, NIST. Development of this dictionary started in 1998 under the editorship of Paul E. Black. After 20 years, DADS needs to move. Learn to Code Part II: Working With Variables @pllee123: Much as I agree with the college classes are a good way to go. I've been a developer for over five years now and I've never been to a class in my life. It was just curiosity that caught me.