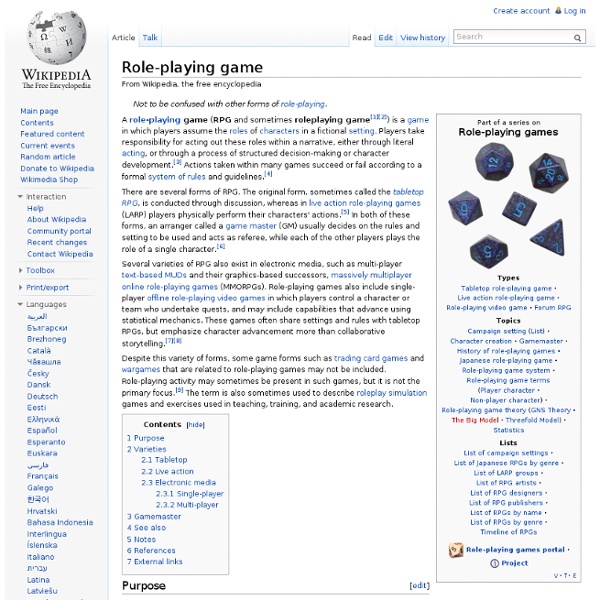 There are several forms of RPG. The original form, sometimes called the tabletop RPG, is conducted through discussion, whereas in live action role-playing games (LARP) players physically perform their characters' actions.[5] In both of these forms, an arranger called a game master (GM) usually decides on the rules and setting to be used and acts as referee, while each of the other players plays the role of a single character.[6] Several varieties of RPG also exist in electronic media, such as multi-player text-based MUDs and their graphics-based successors, massively multiplayer online role-playing games (MMORPGs). Role-playing games also include single-player offline role-playing video games in which players control a character or team who undertake quests, and may include capabilities that advance using statistical mechanics. These games often share settings and rules with tabletop RPGs, but emphasize character advancement more than collaborative storytelling.[7][8] Purpose[edit]

Fairy Tail RPG Gary Gygax Ernest Gary Gygax (/ˈɡaɪɡæks/ GY-gaks; July 27, 1938 – March 4, 2008)[2] was an American writer and game designer best known for co-creating the pioneering role-playing game Dungeons & Dragons (D&D) with Dave Arneson. Gygax has been described as the father of D&D.[3] After leaving TSR in 1985 over issues with its new majority owner, Gygax continued to create role-playing game titles independently, beginning with the multi-genre Dangerous Journeys in 1992. Gygax was married twice and had six children. Early life and inspiration[edit] Gary Gygax was born in Chicago within a few blocks of Wrigley Field[4] on July 27, 1938. During his childhood and teen years, he developed a love of games and an appreciation for fantasy and science fiction literature. Wargames[edit] I'm very fond of the Medieval period, the Dark Ages in particular. TSR[edit] In 1975, Gygax and Kaye were only 36 years old, and Kaye had not made any specific provision in his will regarding his one-third share of the company.

Dave Arneson David Lance "Dave" Arneson (October 1, 1947[2] – April 7, 2009) was an American game designer best known for co-developing the first published role-playing game (RPG), Dungeons & Dragons, with Gary Gygax, in the early 1970s.[3] Arneson's early work was fundamental to the development of the genre, developing the concept of the RPG using devices now considered to be archetypical, such as adventuring in "dungeons", using a neutral judge, and having conversations with imaginary characters to develop the storyline.[4] Arneson discovered wargaming as a teenager in the 1960s, and began combining these games with the concept of role-playing. He was a University of Minnesota student when he met Gygax at the Gen Con gaming convention in the late 1960s. In 1970 Arneson created the game and fictional world that became Blackmoor, writing his own rules and basing the setting on medieval fantasy elements. Arneson left TSR in 1976, and filed suit in 1979 to retain credits and royalties on the game.

TSR, Inc. TSR, Inc. was an American game publishing company and the publisher of Dungeons & Dragons (D&D). When Gary Gygax could not find an established games company willing to publish D&D, the new type of game he and Dave Arneson were co-developing, Gygax and Don Kaye formed Tactical Studies Rules in October 1973.[1] However, needing immediate financing to bring the new game to market before several similar products, Gygax and Kaye brought in Brian Blume in December as an equal partner.[1] When Kaye unexpectedly died in 1975, Blume's father, Melvin, purchased Kaye's shares, and the company was re-formed as TSR Hobbies. With the suddenly popular D&D as its main product, the company became a major force in the games industry by the late 1970s. Melvin Blume eventually sold his shares to his other son Kevin, giving the two Blume brothers a majority control of the company, now renamed TSR, Inc. Melvin Blume's shares were later transferred to Kevin Blume.