50 Lessons I wish I had learned earlier 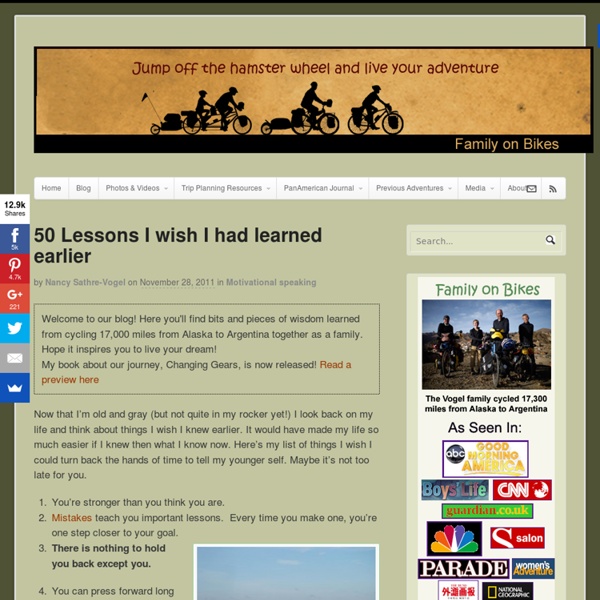 Welcome to our blog! Here you'll find bits and pieces of wisdom learned from cycling 17,000 miles from Alaska to Argentina together as a family. Hope it inspires you to live your dream! My book about our journey, Changing Gears, is now released! Read a preview here Now that I’m old and gray (but not quite in my rocker yet!) You’re stronger than you think you are.Mistakes teach you important lessons. What lies before us and behind us are tiny matters when compared to what lies within us.Don’t pray when it rains if you don’t pray when the sun shines.It’s not about getting a chance, it’s about taking a chance.If it were easy everyone would do it.Be vulnerable.A problem is a chance for you to learn.Regardless of the situation, life goes on. If you enjoyed these inspirational quotes and feel they would be beneficial for others, we would appreciate it if you would take a moment to share it with your friends via Twitter, Facebook, Pinterest or email. Interested in our journey?

6 Cool Kinetic Technologies - Room with a Veu Forget the cloud, these devices work on air. To many, the way some technologies work might seem like magic. But there are shades of enchantment, from the Bluetooth earpiece that seems no more amazing than a hackneyed magician at a kids' party to the technology that's more in the league of David Blaine. Even before the Lumière brothers scared Parisian audiences out of their wits and their seats by making them think that they'd be flattened by a motion-picture train, part of technology's charm has lied in illusion. What holds people in its thrall is that they can learn to master the art and perform the trick themselves. 40 Belief-Shaking Remarks From a Ruthless Nonconformist If there’s one thing Friedrich Nietzsche did well, it’s obliterate feel-good beliefs people have about themselves. He has been criticized for being a misanthrope, a subvert, a cynic and a pessimist, but I think these assessments are off the mark. I believe he only wanted human beings to be more honest with themselves. He did have a remarkable gift for aphorism — he once declared, “It is my ambition to say in ten sentences what others say in a whole book.” A hundred years after his death, Nietzsche retains his disturbing talent for turning a person’s worldview upside-down with one jarring remark. Even today his words remain controversial.

The New Year Is Here! Financial To-Dos in January 2012 The holidays are behind us and the chilly January wind may be nipping at our nose, but we’ve got a secret weapon hidden underneath that fuzzy scarf: resolve. 2012 is here, and we’re planning to kick its butt. After all the New Year’s resolutions we made a couple weeks ago, we’re ready for business. There’s no time better than now to take control of your finances, and we’ll help you get there. So, take a seat, swill that hot cocoa and knock these to-dos off your list: Amazing DIY & Crafts Ideas #2 Cupcake pin cushion via (dollarstorecrafts) Magazine rolled up bowl Mosaic Ornaments from CDs Pallet – just stain and take out some slats. Write out your favorite song lyrics or favorite chapter of a book.

30 Most Ridiculous Doodles on Drawing Something Draw Something is a mobile app developed by Omgpop. It was one of the Mobile apps which won the Flurry App Spotlight Awards in 2012. In the first five weeks after its launching, the game was downloaded 20 million times. Fifty days after its release, it had been downloaded 50 million times. Recently, both Draw Something and Omgpop were bought by the game giant Zynga for $180 million. Two players alternate turns between drawing a picture for the other to guess. INTJ Profile Introverted iNtuitive Thinking Judgingby Marina Margaret Heiss Profile: INTJ Revision: 3.1 Date of Revision: 17 Oct 2009 To outsiders, INTJs may appear to project an aura of "definiteness", of self-confidence. This self-confidence, sometimes mistaken for simple arrogance by the less decisive, is actually of a very specific rather than a general nature; its source lies in the specialized knowledge systems that most INTJs start building at an early age.

Yoga Vedanta Centres Proper Exercise Our physical body is meant to move and exercise. If our lifestyle does not provide natural motion of muscles and joints, then disease and great discomfort will ensue with time. Proper exercise should be pleasant to the practitioner while beneficial to the body, mind and spiritual life. There are numerous modern physical culture systems designed to develop the muscles through mechanical movements and exercises. As Yoga regards the body as a vehicle for the soul on its journey towards perfection, Yogic physical exercises are designed to develop not only the body.

How-To: "Stained Glass" Votive Holders By Jenny Ryan Many times when I’m at the grocery or drug store, I can’t resist throwing a few scented votive candles in my cart. When I’m ready to burn them, it’s easy enough to sit one on a cute little vintage china saucer, but I recently decided to try and find a fancier display solution for them. I also wanted the project to be inexpensive, and the materials used to be things I already had on hand. I was inspired by memories of making faux-stained glass in elementary school and came up with these fun little glass votive holders. This project is quick and easy, and a great way to whip up custom party décor on the cheap. Materials