HOW TO WRITE GOOD 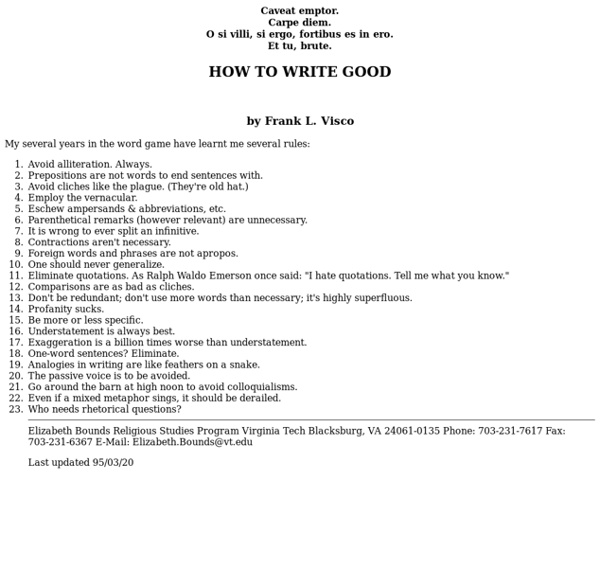 Neil Gaiman's 8 Rules of Writing By Maria Popova In the winter of 2010, inspired by Elmore Leonard’s 10 rules of writing published in The New York Times nearly a decade earlier, The Guardian reached out to some of today’s most celebrated authors and asked them to each offer his or her commandments. After Zadie Smith’s 10 rules of writing, here come 8 from the one and only Neil Gaiman: WritePut one word after another. Find the right word, put it down.Finish what you’re writing.

The 100 Most Important Things To Know About Your Character (revised) Quote from original Author(Beth):This list came about when, one day while struggling to develop a character for an upcoming Hunter game, my lovely roommate Nikki looked at me and said something like, "Wouldn't it be cool to have a list of questions you could go through and answer while you were making characters, so you'd make sure to consider all sorts of different elements in their personality?" I agreed, and that very evening we sat down over hot chocolate and ramen noodles to whip up a list of 100 appearance-, history-, and personality-related questions (which seemed like a nice even number) to answer as a relatively easy yet still in-depth character building exercise. Later on, we went through the list again, took out the questions that sucked (because there were a lot of them) and replaced them with better ones. What you see before you is the result of that second revision. Just don't email us specifically to tell us how much we suck.

GRAMBO It is only a test Actually, it isn't even a test And it contains more than grammar Oh, never mind.... Onward... Why “Show, Don’t Tell” Is the Great Lie of Writing Workshops I’m honored and excited today to be bringing you a guest post by critically acclaimed novelist and writing instructor Joshua Henkin. I first discovered Henkin’s work years ago when I received an advance copy of his novel Matrimony at Book Expo America, and I later enjoyed having him contribute a thought-provoking essay on the art of storytelling to Writer’s Digest magazine (in fact, two of his writing tips from that piece made our Top 20 Writing Lessons From WD list in 2009). I invited Joshua Henkin to be our guest this week in celebration of the release of his brand-new novel, The World Without You. I Like Your Flaws I like how you mispronounce words sometimes, how you fumble and stammer and stutter looking for the right ones to say and the right ways to say them. I appreciate that you find language challenging, because it is, because everything manmade is challenging. Including man, including you. When you sleep on your side, I like to map the constellations between your beauty marks freckles pimples, the minuscule mountains that sprinkle your back. I like the tufts of hair you forgot to shave and the way you smell when you haven’t showered in a while; I like the sleep left in your eyes. I like the way your skin dies in the middle of the night, how you die from embarrassment the next morning; how you writhe in the snake casing you’ve left behind.

Nominalizations Are Zombie Nouns Draft is a series about the art and craft of writing. Take an adjective (implacable) or a verb (calibrate) or even another noun (crony) and add a suffix like ity, tion or ism. You’ve created a new noun: implacability, calibration, cronyism. Sounds impressive, right? Nouns formed from other parts of speech are called nominalizations. 23 Websites that Make Your Writing Stronger We are all apprentices in a craft where no one ever becomes a master. ~Ernest Hemingway How strong is your writing?

Jason Sanford: Don't cliche yourself into becoming a hack writer I'm tired of the writing cliches. You know, all those snappy little sayings about how if you want to be a writer all you have to do is write. Or that you should show not tell. Or start a story in the middle of the action. What can Diane Arbus teach you about writing? I always thought of photography as a naughty thing to do - that was one of my favorite things about it, and when I first did it, I felt very perverse. -- Diane Arbus Diane Arbus (1923-1971) was an American photographer and a student of human diversity, often described as a "photographer of freaks." Maybe one should admit that freakishness comes from within and 'normal' is a mirage.

201 Ways to Arouse Your Creativity Arouse your creativity Electric flesh-arrows … traversing the body. A rainbow of color strikes the eyelids. A foam of music falls over the ears. It is the gong of the orgasm. ~ Anais Nin Exquisite corpse an exquisite corpse Exquisite corpse, also known as exquisite cadaver (from the original French term cadavre exquis) or rotating corpse, is a method by which a collection of words or images is collectively assembled. Each collaborator adds to a composition in sequence, either by following a rule (e.g.

English words that describe behaviour An A-Z of English words and phrases that describe behaviour. active = always doing something: "She's an active person and never wants to stay in." aggressive = being angry or threatening: "He's aggressive and starts arguments." ambitious = wanting to succeed: "He's ambitious and wants to lead the company." Make-or-Break Verbs Draft is a series about the art and craft of writing. This is the third in a series of writing lessons by the author. A sentence can offer a moment of quiet, it can crackle with energy or it can just lie there, listless and uninteresting. What makes the difference? The verb.