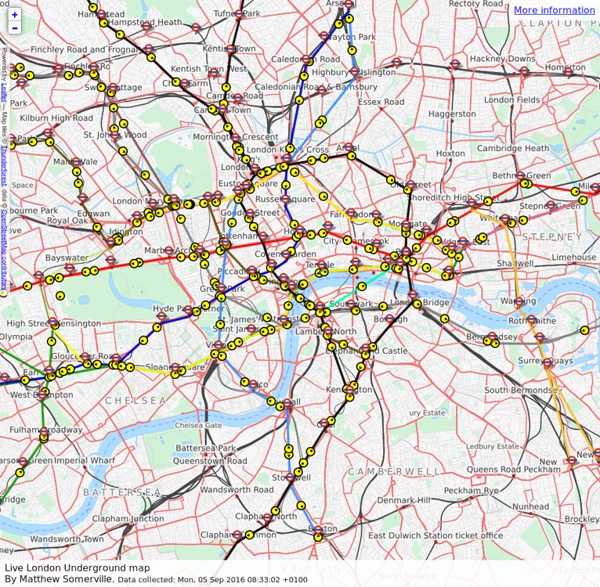 Loading... Powered by Leaflet — Map tiles © Thunderforest, data © OpenStreetMap contributors. Live London Underground map By Matthew Somerville. Data collected: Mon, 05 Sep 2016 08:33:02 +0100 <div style="border: solid 2px #cc0000; padding: 5px; width: 70%; margin: 1em auto;"> I'm afraid that this page requires JavaScript to draw the maps and plot move the trains, which isn't possible with just HTML. More information Hide What is this? This map shows all trains (yellow dots) on the London Underground network in approximately real time. I have similar things for the London buses and National Rail, and an awesome bookmarkable train times journey planner. — Matthew How does it work? Live departure data is fetched from the TfL API, and then it does a bit of maths and magic. Who did this? Matthew Somerville (with helpful hinderances from Frances Berriman and James Aylett). Originally built at Science Hackday, June 2010.

Protovis Protovis composes custom views of data with simple marks such as bars and dots. Unlike low-level graphics libraries that quickly become tedious for visualization, Protovis defines marks through dynamic properties that encode data, allowing inheritance, scales and layouts to simplify construction. Protovis is free and open-source, provided under the BSD License. It uses JavaScript and SVG for web-native visualizations; no plugin required (though you will need a modern web browser)!

Gary's Social Media Count Click for App Store Page Original Counter and Post from 24 Sep 2009! June 2013 ‘Social’ Update (mobile, games & heritage to come) Encrypt the Web with the HTTPS Everywhere Firefox Extension Today EFF and the Tor Project are launching a public beta of a new Firefox extension called HTTPS Everywhere. This Firefox extension was inspired by the launch of Google's encrypted search option. We wanted a way to ensure that every search our browsers sent was encrypted. Seats to spare – but Fifa won&#039;t let South Africans fill them - Africa, World Supporters already in South Africa have found themselves unable to get in to supposedly sold-out games, only to see banks of unused seating showing on television pictures. World football's organising body, Fifa, continues to insist that ticket sales for the tournament in South Africa are higher than any previous finals except for the USA '94. In staging the first World Cup on African soil, Fifa had vowed to fill the stadium, and set up a four-tier pricing system to ensure that tickets would be affordable to ordinary South African football fans and priced attractively enough to lure Africans from the rest of the continent to make the trip. The South African government insisted that it would bus in schoolchildren, if necessary, to watch matches rather than see empty seats, but has so far been powerless to do anything about this as Fifa red tape has blocked the release of tickets.

Weave Data Tutorial Weave Data TutorialTutorial for Weave Magazine 03.10 about visualizing network data Client: Weave Magazine / Page publisher We all use twitter, write emails, skype and blog all day long. There isn’t a single day we are not going to visit websites like google, youtube, the website of our favorite newspaper or social network and browse through the web. Despite that, or actually because of it, everybody tends to use the web in a different manner. Even if you are not using your computer at all, it is heavily communicating with the internet by sending and receiving so called IP-packets from all different kind of software that is installed on your PC.

Typographical Infographics That'll Make You Go "Wow!" Apr 11 2012 Words are a really powerful tool to express what you think, but an even more powerful weapon to visualize your main thoughts and concept are graphics. To be more specific a rich combination of beautiful typographical signs, letters and symbols. 15 Great Ways to Secure Your Website Since there are no point and click software, like an Anti Virus solution, available to secure a website, people just consider the job is done once the website is up. It definitely is not. Protecting a website or webserver is possible only by continued efforts. Unlike a poorly protected desktop in your place of business, a hacked website will reflect poorly on you, your business or brand. With the sheer volume of zero day threats emanating all the time, there may not be fit it and forget solutions for protecting a website. But there are always some time tested fundamental ground work that should be done to get the first line of defence up while figuring out a detailed security plan.

Forrester Projects Tablets Will Outsell Netbooks By 2012, Desktops By 2013 The tablet era has just begun, but Forrester Research is already predicting tablet sales in the U.S. will overtake netbook sales by 2012, and desktop sales by 2015. At the Untethered conference today in New York City, Forrester analyst Sarah Rotman Epps laid out her projections comparing tablet sales to netbooks, laptops, and desktops. She expects 3.5 million tablets (including the iPad and other tablets) to be sold this year, growing to 20.4 million in 2015. Meanwhile, she expects desktop sales to drop from 18.7 million units in 2010 to 15.7 million units in 2015. As a percentage of overall PC sales, tablets will grow from 6 percent this year to 18 percent in 2012 (when netbooks are estimated to account for 17 percent of sales. The next year, in 2013, tablet sales are projected to outstrip desktop unit sales, 21 percent to 20 percent.

logTool: Revealing the Hidden Patterns of Online Surfing Behavior logTool [onformative.com] is a data visualization tool that displays your online activity, based on data from the powerful network packet sniffing tool Carnivore. By analyzing the different IP addresses and ports, the visualization is able to determine and represent what kind of application or service sends or receives the packets. Developed for the magazine Weave, logTool was used to digest the surfing behavior of several interaction designers, artists and developers. The time period of a whole day was split into 288 timeslots, 5 minutes each, represented by a radial bar graph. The gray bars show the overall outgoing Internet traffic while the purple bars show all the packets that were received by the user. The dotted line is a more detailed view of all HTTP requests.

Timeline Because there are so many details to the styling, this is not exactly simple, but, if you have some technical capacity, you can override TimelineJS's CSS rules and have complete control over the look of the timeline. For details, see Using the TimelineJS CSS selectors. You will need to be able to instantiate the Timeline in javascript on your own page. (There is no way to override the CSS using the iframe embed.) Then, either in <style> tags in that page, or in an external stylesheet, you can specify CSS rules changing some or all of TimelineJS's default presentation. 50 Ways to Get Your Site Noticed This article aims to show you how to attract users and make them hungry for more. Who is this post for? Anyone with a website.

E3 2010: Hands on with Disney’s DigiComics for iPad, iPhone, iPod Touch Sections: Comics-and-Graphic-Novels, Conventions, E3, Features, Gaming News, Gear, Handhelds, iPhone & iPod Touch & iPad, Previews You might think there were only console and PC games at E3 2010. Oh, how wrong you are. There were plenty of iPod Touches and iPads (secured to displays, of course) showing games and even a few apps on the exhibition floor. In the same booth as the Disney’s Epic Mickey was a small area with a half dozen iPads running a Disney DigiComics app.

Visualizing Databases I’ve become quite the fan of Gephi, lately, and received a good-natured challenge by one of my colleagues, which went something like, “Why is a everything a network with you, now?” Obviously, in the case of social network-like phenomena, such as mapping collaboration in the Digital Humanities with the DH@Stanford graph–network theory and network language (whether visual or theoretical) make sense. Network analytical tools like Gephi are also only a short step away from spatial analytical tools, like ArcGIS, many of which are used to ask questions about geographic networks and not about the kind of continuous data found in topography.

Guggenheim Museum Makes 65 Exhibit Catalogues Free Online The Guggenheim is one of the real standouts in the global modern art arena. The New York-based institution is no light-weight in the area of arts education. They've now extended that mission extensively by making dozens of high-quality publications on artists available to anyone with an Internet connection. The books, art catalogues for major exhibitions at the museum, pop out into a clean, fast virtual book reader. Open Culture points out that the books are also available for download in a number of e-book formats, including ePub and PDF, at Archive.org's Guggenheim page.