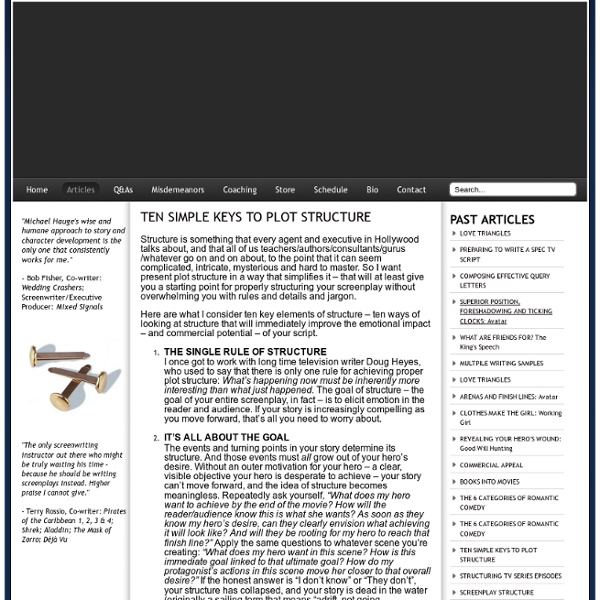 Structure is something that every agent and executive in Hollywood talks about, and that all of us teachers/authors/consultants/gurus/whatever go on and on about, to the point that it can seem complicated, intricate, mysterious and hard to master. So I want present plot structure in a way that simplifies it – that will at least give you a starting point for properly structuring your screenplay without overwhelming you with rules and details and jargon. Here are what I consider ten key elements of structure – ten ways of looking at structure that will immediately improve the emotional impact – and commercial potential – of your script. THE SINGLE RULE OF STRUCTURE I once got to work with long time television writer Doug Heyes, who used to say that there is only one rule for achieving proper plot structure: What’s happening now must be inherently more interesting than what just happened.

Year in Review: The 15 Best Foreign Films of 2009 | Film School Rejects - StumbleUpon Goddamn I’m sick of making lists. Thankfully this is the last one of the year for me, and even better it’s the one I find most important. Foreign movies don’t always get the attention or the exposure they deserve, so it’s nice to have the chance to highlight the ones I think are the best. And while some folks believe the term ‘foreign films’ should only apply to foreign language films I’m tired of that artificial restraint, so this list is open to movies from any and all countries outside of the US. (Except Luxembourg of course. In addition to the language question ranking the year’s best foreign releases can be a major pain in the ass thanks to multiple other factors… most foreign films actually released in 2009 haven’t reached US screens yet, many of the movies that did get a domestic release did so in an extremely limited number of theaters or possibly just a festival screening, and many more made their US debut on DVD. Antichrist (Lars Von Trier, Denmark)

Screenplay Basics - Scripped A Scripped Compendium by Johnathan Carr Traditional storytelling recounts past events, whereas screenwriting is locked in the present - thus you may not deviate from PRESENT TENSE. You may also be tempted to describe every inch of the world you're creating - don't! At the beginning of a feature film script, often but not always, the first line will be: FADE IN. While you can write a longer ACTION paragraph, think about keeping it under five lines at a time. In the ACTION line, be sure to capitalize SOUND EFFECTS, CAMERA DIRECTION and the first appearance of a speaking CHARACTER. Use a PARENTHETICAL to note an action the speaker is performing while speaking or if you want to indicate whom the speaker is addressing such as addressing a new character in mid-DIALOGUE. Off camera (O.C.) and off screen (O.S.) are identical, which one you use is really a personal preference. Describe specific SHOTS only when necessary, not every little bit of CAMERA DIRECTION need be mentioned. Think subtext.

Unique Plots Another 20 games that make you think about life First we gave you five. Then we gave you ten. Now we are giving you 20 games that make you think about life. As with our previous lists, we have focused mainly on free games that you can play in your browser. 1 Elude Developed by Singapore-MIT Gambit Game Lab, Elude is a dark, atmospheric game that aims to shed light on the nature of depression. The forest that you start the game in represents a normal mood. This is a gloomy underground cavern, with a sticky muddy base that sucks you down. 2 Air Pressure You will have to play through Air Pressure - a Flash port of an interactive novel by Bentosmile - more than once to truly understand the characters and themes in this game. 3 Symon Another impressive production by Singapore-MIT Gambit Game Lab, Symon is a point-and-click adventure game with a difference. You also get to solve a lot of puzzles. 4 Ulitsa Dimitrova The Russians have never been the most cheery people. 5 Ute I am not quite sure what to make of this game. 6 Aether 8 Yet One Word

How to Build Subplots From Multiple Viewpoints Multiple viewpoints provide diversion from, and contrast to, the protagonist’s perspective. They can deepen conflict, enlarge a story’s scope and add to a novel the rich texture of real life. Subplots carry those effects even further. In our workaday world, we do not live in isolation. Subplots and multiple points of view are often linked by their very natures. Of course, subplots and multiple points of view make novels longer and more work, but rewards for that effort are there for writer and reader alike—that is, if they are successful. —By Donald Maass, author of The Breakout Novelist Choosing a subplot begins with choosing characters with which to work. If none are to be found, it might be worthwhile to grow some of your secondary characters, depending on the nature of your novel. Subplots will not have the desired magnification effect unless there are connections between them. A second requirement of subplots is that they each affect the outcome of the main plotline.

Neil deGrasse Tyson Lists 8 (Free) Books Every Intelligent Person Should Read A Reddit.com user posed the question to Neil deGrasse Tyson: "Which books should be read by every single intelligent person on the planet?" Below, you will find the book list offered up by the astrophysicist, director of the Hayden Planetarium, and popularizer of science. Where possible, we have included links to free versions of the books, all taken from our Free Audio Books and Free eBooks collections. Or you can always download a professionally-narrated book for free from Audible.com. Details here. If you're looking for a more extensive list of essential works, don't miss The Harvard Classics, a 51 volume series that you can now download online. 1.) 2.) 3.) 4.) 5.) 6.) 7.) 8.) Tyson concludes by saying: "If you read all of the above works you will glean profound insight into most of what has driven the history of the western world." He has also added some more thoughts in the comments section below, saying: Thanks for this ongoing interest in my book suggestions. Related Content: