Value of the natural world on humanity 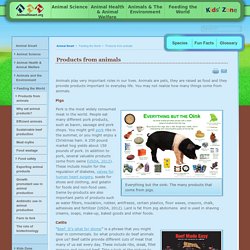 Animals are pets, they are raised as food and they provide products important to everyday life. You may not realize how many things come from animals. Pigs Pork is the most widely consumed meat in the world. People eat many different pork products, such as bacon, sausage and pork chops. Cattle “Beef: It’s what for dinner” is a phrase that you might hear in commercials. Dairy cows are another type of cattle that provide us with nutritional products. When dairy animals can no longer produce milk, they are often used for meat, primarily in the form of ground beef.

There are various by-products that come from all types of cattle. Gelatin is a protein obtained by boiling skin, tendons, ligaments, and/or bones of cattle in water. Leather comes from the hides of animals. Byproducts from an average 1,000-pound steer are worth 96 dollars and account for 3.4 billion dollars annually for the United States (USDA, 2012). Poultry Sheep Goats Horses Rabbits. 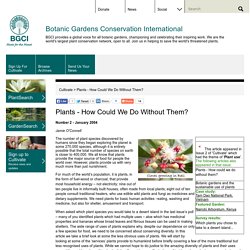 Number 2 - January 2004 Jamie O'Connell The number of plant species discovered by humans since they began exploring the planet is some 270,000 species, although it is entirely possible that the total number of species on earth is closer to 400,000. We all know that plants provide the major source of food for people the world over. However, plants provide us with very much more than just nurishment. For much of the world’s population, it is plants, in the form of fuel-wood or charcoal, that provide most household energy – not electricity; nine out of ten people live in informally built houses, often made from local plants; eight out of ten people consult traditional healers, who use edible wild plants and fungi as medicines and dietary supplements. 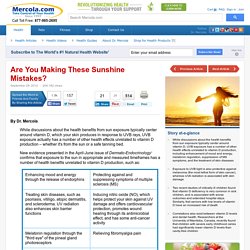 Mercola While discussions about the health benefits from sun exposure typically center around vitamin D, which your skin produces in response to UVB rays, UVB exposure actually has a number of other health effects unrelated to vitamin D production – whether it's from the sun or a safe tanning bed.New evidence presented in the April-June issue of Dermato-Endocrinology1 confirms that exposure to the sun in appropriate and measured timeframes has a number of health benefits unrelated to vitamin D production, such as: UV Radiation has Long History of Use as Treatment of Disease According to the featured Dermato-Endocrinology article:2 "Solar ultraviolet (UV) radiation has been used since ancient times to treat various diseases. Why I Strongly Advise Using the Sun or Safe Tanning Bed Another article written by Richard J. Sensible Sun Exposure Actually Protects Against Melanoma. Top 22 Benefits of Trees. Trees combat the climate change Excess carbon dioxide (CO2) caused by many factors is a building up in our atmosphere and contributing to climate change. 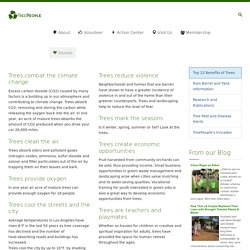 Trees absorb CO2, removing and storing the carbon while releasing the oxygen back into the air. In one year, an acre of mature trees absorbs the amount of CO2 produced when you drive your car 26,000 miles. Trees clean the air Trees absorb odors and pollutant gases (nitrogen oxides, ammonia, sulfur dioxide and ozone) and filter particulates out of the air by trapping them on their leaves and bark. Trees provide oxygen In one year an acre of mature trees can provide enough oxygen for 18 people. Trees cool the streets and the city Average temperatures in Los Angeles have risen 6°F in the last 50 years as tree coverage has declined and the number of heat-absorbing roads and buildings has increased.