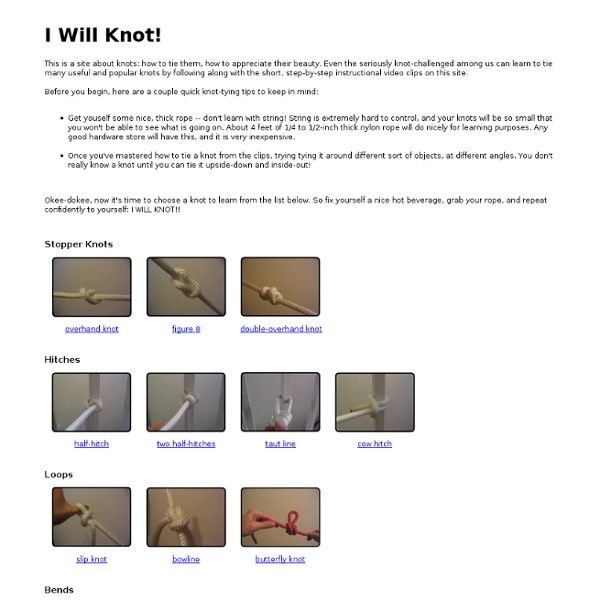 This is a site about knots: how to tie them, how to appreciate their beauty. Even the seriously knot-challenged among us can learn to tie many useful and popular knots by following along with the short, step-by-step instructional video clips on this site. Before you begin, here are a couple quick knot-tying tips to keep in mind: Get youself some nice, thick rope -- don't learn with string! String is extremely hard to control, and your knots will be so small that you won't be able to see what is going on. About 4 feet of 1/4 to 1/2-inch thick nylon rope will do nicely for learning purposes.

How to make boxes from paint swatches If you've got paint chips sitting around begging to be made into something, try folding them into boxes for paperclips, thumbtacks, party favor candies, or tiny gifts. I made these from Behr swatches, available at Home Depot. You'll need paint swatches, double-stick tape, an X-acto knife, ruler, and cutting mat. For the box bottom, cut a 1/2" strip off each of the two rounded ends of the swatch. You should be left with a 5" x 5" square. At a point slightly more than 1 1/2" from one edge—about 1 17/32" if you want to be picky, but I just eyeballed it—score a line with your knife.

wednes-diy UPDATE: This post originally ran on March 23 2011, but with summer winding down we wanted to bring it back up for some late summer inspiration! a fellow fp girl sent this to me a couple weeks back and i’ve been thinking about it ever since! i can think of a million reasons why these would be awesome… as apartment décor, as outdoor party décor, and – wouldn’t they be the best thing EVER for camping in general or at a festival? just let them sit in the sun all day, and they’ll last all night! i am absolutely going to make some to bring with me to bonnaroo this year. you can buy a sun jar here, but you can make your own for much cheaper! Meet the Personal Chef of Pot Jonesing for some gourmet tri-tip and a solid buzz? Check out Cannabis Catering, a San Francisco-based outfit that specializes in marijuana cuisine. The brainchild of Chef Frederick Nesbitt, a California Culinary Academy-trained chef who has worked as personal chef for Jerry Rice and John Madden, Cannabis Catering offers four and five-course meals laced with ganja.

Wipe Off Weekly Menu Board I am a meal planner. I refuse to go grocery shopping without my week’s worth of meals planned out and list made. (It’s either that or wander aimlessly around the grocery store for two hours and then make ten more trips back during the week to get things I forgot.) Unusual Words Unusual Words A by no means exhaustive list of rare, obscure, strange and sometimes funny words and their meanings that only seem to crop up in crosswords and dictionaries. Words that are used so seldom, you wonder who invented them and why.

How to cut glass I posted a picture about 1 week ago on Instagram, Facebook and Twitter of me cutting glass using just string. I got LOT’S of requests for a tutorial on how I DID THIS! So here it is. FINALLY! You will be able to learn how to cut glass. I want to warn you. Shoe Lacing Methods Mathematics tells us that there are more than 2 Trillion ways of feeding a lace through the six pairs of eyelets on an average shoe. This section presents a fairly extensive selection of 50 shoe lacing tutorials. They include traditional and alternative lacing methods that are either widely used, have a particular feature or benefit, or that I just like the look of. 50 Different Ways To Lace Shoes Criss Cross Lacing

Kitchen Tips 1. Stuff a miniature marshmallow in the bottom of a sugar cone to prevent ice cream drips. 2. What You'll Wish You'd Known January 2005 (I wrote this talk for a high school. I never actually gave it, because the school authorities vetoed the plan to invite me.) When I said I was speaking at a high school, my friends were curious. What will you say to high school students? So I asked them, what do you wish someone had told you in high school?