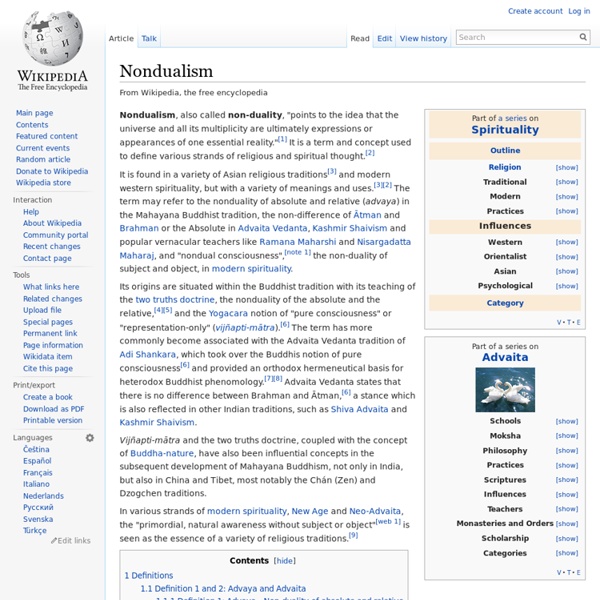 Nondualism, also called non-duality, "points to the idea that the universe and all its multiplicity are ultimately expressions or appearances of one essential reality." It is a term and concept used to define various strands of religious and spiritual thought. Its origins are situated within the Buddhist tradition with its teaching of the two truths doctrine, the nonduality of the absolute and the relative, and the Yogacara notion of "pure consciousness" or "representation-only" (vijñapti-mātra). The term has more commonly become associated with the Advaita Vedanta tradition of Adi Shankara, which took over the Buddhis notion of pure consciousness and provided an orthodox hermeneutical basis for heterodox Buddhist phenomology. Advaita Vedanta states that there is no difference between Brahman and Ātman, a stance which is also reflected in other Indian traditions, such as Shiva Advaita and Kashmir Shaivism. Definitions[edit] Dictionary definitions of "nondualism" are scarce. Tantra[edit] 1.

Mental plane Predecessors of the concept[edit] In India in the seventh century b.c.e., the Taittiriya Upanishad referred to five levels of self, of which the middle one is the "self made of mind" (manas) Although the text is describing the nature of the individual rather than the cosmos as a whole, it established the concept of mind as only one of a series of ontological layers of being. The Taittiriyan concept of the five selves would represent an important element of Vedantic ontology, for example the five koshas of Advaita Vedanta. Theosophical and Hermetic interpretations[edit] The esoteric conception of the Mental Plane had to wait till the occult revival of the late 19th century, with the development of modern Theosophical, Hermetic, and Kabbalistic ideas that were to serve as the foundation for the current New Age movement. Around the turn of the twentieth century, Max and Alma Theon were producing The Tradition. The world of thought in the Western Wisdom Teachings[edit] See also[edit]

Theodicy Theological attempt to resolve the problem of evil Gottfried Leibniz coined the term "theodicy" in an attempt to justify God's existence in light of the apparent imperfections of the world. Theodicy () means vindication of God. It is to answer the question of why a good God permits the manifestation of evil, thus resolving the issue of the problem of evil. the Plotinian theodicy, named after Plotinusthe Augustinian theodicy, which Hick based on the writings of Augustine of Hippothe Irenaean theodicy, which Hick developed, based on the thinking of St. The problem was also analyzed by pre-modern theologians and philosophers in the Islamic world. Similar to a theodicy, a cosmodicy attempts to justify the fundamental goodness of the universe, and an anthropodicy attempts to justify the goodness of humanity. Definition and etymology[edit] In the Internet Encyclopedia of Philosophy, Nick Trakakis proposed an additional three requirements which must be contained within a theodicy: History[edit]

Ash heap of history The expression arose in the 19th century in various places,[1] but it was popularized by Leon Trotsky (in its Russian form "Свалка истории") in response to the Mensheviks walking out of the Petrograd Second Congress of Soviets, on October 25, 1917 (Julian calendar), thereby enabling the Bolsheviks to establish their dominance. Trotsky declared: "'You are pitiful, isolated individuals! You are bankrupts. Your role is played out. Go where you belong from now on—into the dustbin of history!'" It has since been used in both the direct and the ironic sense in political and nonpolitical contexts. Noted examples[edit] It was used by Ronald Reagan in a speech to the British House of Commons on June 8, 1982. See also[edit] Memory hole References[edit] General

Spiritual practice A spiritual practice or spiritual discipline (often including spiritual exercises ) is the regular or full-time performance of actions and activities undertaken for the purpose of cultivating spiritual development . A common metaphor used in the spiritual traditions of the world's great religions is that of walking a path. [ 1 ] Therefore a spiritual practice moves a person along a path towards a goal. The goal is variously referred to as salvation , liberation or union (with God). A person who walks such a path is sometimes referred to as a wayfarer or a pilgrim . [ edit ] Abrahamic religions [ edit ] Baha'i Faith Prayer in the Bahá'í Faith refers to two distinct concepts: obligatory prayer and devotional prayer (general prayer). [ edit ] Christianity The Religious Society of Friends (also known as the Quakers) practices silent worship, which is punctuated by vocal ministry. [ edit ] Islam [ edit ] Judaism [ edit ] Indian religions [ edit ] Buddhism [ edit ] Hinduism [ edit ] Other

Memory hole Origins[edit] In Nineteen Eighty-Four the memory hole is a small chute leading to a large incinerator used for censorship:[3] In the walls of the cubicle there were three orifices. To the right of the speakwrite, a small pneumatic tube for written messages, to the left, a larger one for newspapers; and in the side wall, within easy reach of Winston's arm, a large oblong slit protected by a wire grating. This last was for the disposal of waste paper. In the novel, the memory hole is a slot into which government officials deposit politically inconvenient documents and records to be destroyed. A document placed in the memory hole is supposedly transported to an incinerator from which "not even the ash remains". See also[edit] References[edit] Notes George Orwell, Nineteen Eighty-Four, first published by Martin Secker & Warburg, London, 1949.

Taoism Taoist rite at the Qingyanggong (Bronze Ram Temple) in Chengdu, Sichuan. Taoism, or Daoism, is a philosophical, ethical, and religious tradition of Chinese origin that emphasizes living in harmony with the Tao (also romanized as Dao). The term Tao means "way", "path" or "principle", and can also be found in Chinese philosophies and religions other than Taoism. In Taoism, however, Tao denotes something that is both the source and the driving force behind everything that exists. While Taoism drew its cosmological notions from the tenets of the School of Yin Yang, the Tao Te Ching, a compact and ambiguous book containing teachings attributed to Laozi (Chinese: 老子; pinyin: Lǎozǐ; Wade–Giles: Lao Tzu), is widely considered its keystone work. After Laozi and Zhuangzi, the literature of Taoism grew steadily and was compiled in form of a canon—the Daozang—which was published at the behest of the emperor. Spelling and pronunciation[edit] Categorization[edit] Origins and development[edit]

Spiritualism (beliefs) It is also a term commonly used for various psychic or paranormal practices and beliefs recorded throughout humanity's history[2][3] and in a variety of cultures.[4][5] Spiritualistic traditions appear deeply rooted in shamanism and perhaps are one of the oldest forms of religion. Mediumship is a modern form of shamanism and such ideas are very much like those developed by Edward Burnett Tylor in his theory of animism,[6] in which there are other parallel worlds to our own, though invisible to us and not accessible to us in our state. A psychic is to be one of the connecting link between these worlds. Many reference works [2] also use the term spiritism to mean the same thing as "spiritualism" but Spiritism is more accurately used to mean Kardecist spiritism. The word also takes on specific alternative meanings in various differing fields of academia, see below. Spiritualism is used in English to mean either; The Nine Principles of the National Spiritualist Association of Churches, USA:

Axis mundi The axis mundi (also cosmic axis, world axis, world pillar, center of the world, world tree), in certain beliefs and philosophies, is the world center, or the connection between Heaven and Earth. As the celestial pole and geographic pole, it expresses a point of connection between sky and earth where the four compass directions meet. At this point travel and correspondence is made between higher and lower realms.[1] Communication from lower realms may ascend to higher ones and blessings from higher realms may descend to lower ones and be disseminated to all.[2] The spot functions as the omphalos (navel), the world's point of beginning.[3][4][5] Background[edit] The symbol originates in a natural and universal psychological perception: that the spot one occupies stands at "the center of the world". This space serves as a microcosm of order because it is known and settled. Plants[edit] Plants often serve as images of the axis mundi. Human figure[edit] Homes[edit] Shamanic function[edit]

Paraconsistent logic A paraconsistent logic is a logical system that attempts to deal with contradictions in a discriminating way. Alternatively, paraconsistent logic is the subfield of logic that is concerned with studying and developing paraconsistent (or "inconsistency-tolerant") systems of logic. Inconsistency-tolerant logics have been discussed since at least 1910 (and arguably much earlier, for example in the writings of Aristotle); however, the term paraconsistent ("beside the consistent") was not coined until 1976, by the Peruvian philosopher Francisco Miró Quesada.[1] Definition[edit] In classical logic (as well as intuitionistic logic and most other logics), contradictions entail everything. Which means: if P and its negation ¬P are both assumed to be true, then P is assumed to be true, from which it follows that at least one of the claims P and some other (arbitrary) claim A is true. Paraconsistent logics and classical logic[edit] Motivation[edit] Philosophy[edit] Tradeoff[edit] Example[edit] means that

Hinduism Hinduism is the dominant religion, or way of life,[note 1] in South Asia, most notably India. It includes Shaivism, Vaishnavism and Shaktism among numerous other traditions, and a wide spectrum of laws and prescriptions of "daily morality" based on karma, dharma, and societal norms. Hinduism is a categorisation of distinct intellectual or philosophical points of view, rather than a rigid, common set of beliefs. Hinduism, with about one billion followers[web 1] is the world's third largest religion, after Christianity and Islam. Hinduism has been called the "oldest religion" in the world,[note 2] and some practitioners refer to it as Sanātana Dharma, "the eternal law" or the "eternal way"[3] beyond human origins. Etymology The word Hindu is derived (through Persian) from the Indo-Aryan/Sanskrit word Sindhu, the Indo-Aryan name for the Indus River in the northwestern part of the Indian subcontinent (modern day Pakistan and Northern India). Definitions Colonial influences Sanātana Dharma Moksha