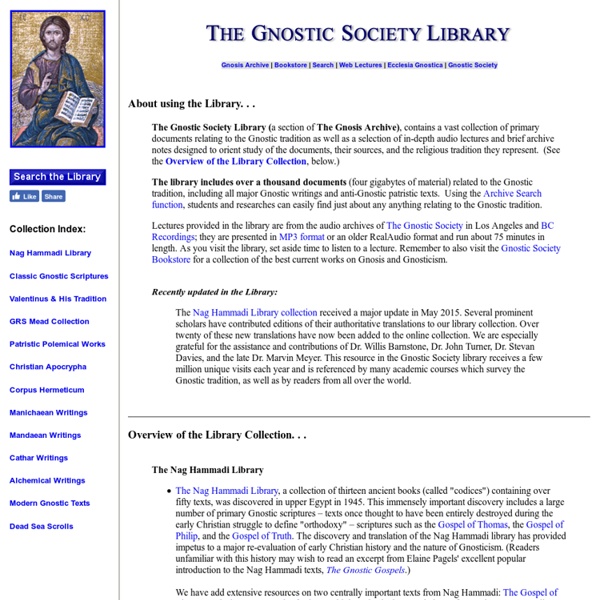 Almost all of the several dozen internet sites with collections of texts similar to our own obtained their material by directly or indirectly copying some files present at the Gnosis Archive. Ours was perhaps the first major collection of such texts to appear on "the web" in 1994, and thus has served as a source for others creating "their own" collections. Unfortunately transcription errors, typos, and primitive HTML formatting were present in the massive amount of material added to the Gnosis Archive in our first years; in a repeated process of "copying" they have been very widely propagated around the internet. Over nearly two decades we have made many corrections to these texts. It appears that few of the sites copying material from this collection have taken the time to read, edit and correct the texts! This is of course exactly how the manuscript tradition has propagated errors in the past centuries, though with vastly different technologies of reproduction.

Masonic E-Book Library Note: Many of the e-books in this library are several hundred pages long and include illustrations. It takes a minimum of a high-speed DSL or cable modem to download many of them. i.e. Mackey's Masonry Defined takes 3 minutes just to download the text. Grimoar - Occult Texts Welcome to our library Welcome in our occult texts library. It contains 2052 unrevised texts in pdf, doc and other formats. Librarians are responsible neither for text redaction nor for their contents. It is possible that some of the texts are still under copyright. If you are not sure you act in accordance with your local law, please do not download anything.

The Gnostic World View: A Brief Summary of Gnosticism Gnosis Archive | Library | Bookstore | Index | Web Lectures | Ecclesia Gnostica | Gnostic Society GNOSTICISM IS THE TEACHING based on Gnosis, the knowledge of transcendence arrived at by way of interior, intuitive means. Although Gnosticism thus rests on personal religious experience, it is a mistake to assume all such experience results in Gnostic recognitions. It is nearer the truth to say that Gnosticism expresses a specific religious experience, an experience that does not lend itself to the language of theology or philosophy, but which is instead closely affinitized to, and expresses itself through, the medium of myth. Indeed, one finds that most Gnostic scriptures take the forms of myths. The term “myth” should not here be taken to mean “stories that are not true”, but rather, that the truths embodied in these myths are of a different order from the dogmas of theology or the statements of philosophy.

History of the Ancient Aryans Iran is the ancient name of Persia, and it is derived from the root "Arya" or Aryan, the Indo-European branch of peoples who settled in that land. The Aryans of ancient Iran were Mazdayasni Zarathushtris, ie. Worshippers of Ahura Mazda (the name of God in Avestan) as revealed by the ancient prophet Zarathushtra, thousands of years before Christ. However, all the ancient Zoroastrian scriptures speak of an earlier homeland from where our people came, the lost "Airyane Vaejahi" or seedland of the Aryans.

Cowspiracy: The Sustainability Secret (2015) Cowspiracy: The Sustainability Secret is a groundbreaking feature-length environmental documentary following intrepid filmmaker Kip Andersen as he uncovers the most destructive industry facing the planet today – and investigates why the world’s leading environmental organizations are too afraid to talk about it. Animal agriculture is the leading cause of deforestation, water consumption and pollution, is responsible for more greenhouse gases than the transportation industry, and is a primary driver of rainforest destruction, species extinction, habitat loss, topsoil erosion, ocean “dead zones,” and virtually every other environmental ill. Yet it goes on, almost entirely unchallenged. As Andersen approaches leaders in the environmental movement, he increasingly uncovers what appears to be an intentional refusal to discuss the issue of animal agriculture, while industry whistleblowers and watchdogs warn him of the risks to his freedom and even his life if he dares to persist.

Pyramid Texts Online - Library Come in and make yourself comfortable. Select a book from the list below to load into the reading window. If you need help call Bennu by clicking on the cartouche of Unas at the top of the page. Use the arrows on the bottom right of the screen to turn the pages. Gutenberg On August 26 2020, the Project Gutenberg website underwent some major changes. These changes had been previewed since early 2020, and visitors to the old site were invited to try the new site, including giving input via a brief survey. The old site is no longer available. If you found yourself on this page unexpectedly, it is because an old page was redirected here. Please use the navigation menus at the top of the page to find what you were looking for.

Archons, Annunaki & The Nag Hammadi Codices For those of you who have never heard of the 'Archons' ... The first references to the Archons can be seen in ancient Nag Hammadi Text ... The Nag Hammadi Library, a collection of thirteen ancient codices containing over fifty texts, was discovered in upper Egypt in 1945. Gargantua and Pantagruel Rabelais had studied Ancient Greek and he applied it in inventing hundreds of new words in the text, some of which became part of the French language.[2] Wordplay and risque humor abound in his writing. Initial publication[edit] Although different editions divide the work into a varying number of tomes, the original book is a single novel consisting of seven volumes. Plot summary[edit] Pantagruel[edit]

Calendar Reform 1.) Why fool with the calendar? There are enormous economic advantages to the proposed calendar. These benefits come because the new calendar is identical every year... except that, every five or six years, there is a one-week long "Mini-Month," called "Xtr (or Extra)," at the end of December. "Xtr (or Extra) Week" brings the calendar into sync with the seasonal change as the Earth circles the Sun. How much needless work do institutions, such as companies and colleges, put into arranging their calendars for every coming year?