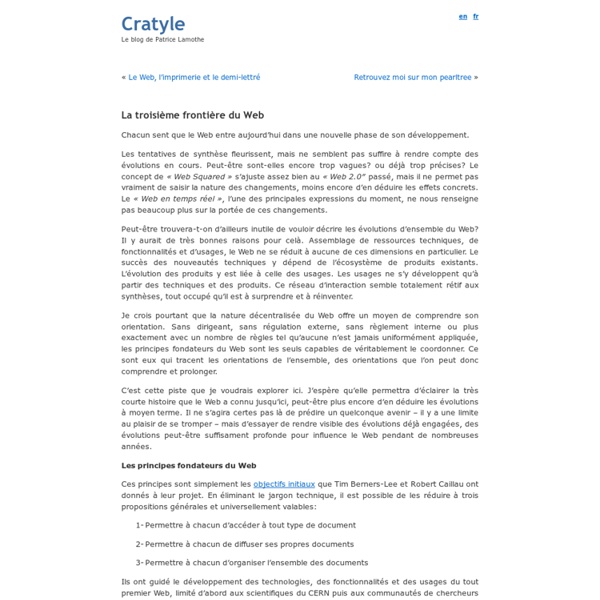 The Petabyte, Exabyte, Zettabyte, and Yottabyte Scales February 5, 2014 About the Cisco Visual Networking Index Q. Curation - The Third Web Frontier Posted by Guest Writer - January 8, 2011 Here is a guest article by Partice Lamothe - CEO of Pearltrees (Pearltrees is a consulting client of SVW.) This is a lightly edited version of "La troisième frontière du Web" that appeared in the magazine OWNI - Digital Journalism - March 2010. The article argues that the founding pricinciples of the Internet are only now being implemented and that the next frontier is in organizing, or curating, the Internet. By Patrice Lamothe Hydraulics Could Enable Fullscreen Braille Display For most blind computer users, surfing the internet or catching up on e-mail means reading just one line at a time, because commercially available braille displays can’t show full pages of text. Researchers from North Carolina State University now say they have devised a display that would allow visually challenged users to read a full page at a time — and at a much lower cost than existing displays. “We have developed a low-cost, compact, full-page braille display that is fast and can be used in PDAs, cellphones and even GPS systems,” says Dr. Peichun Yang, one of the researchers working on the project, who is himself blind.

Gary's Social Media Count Click for App Store Page Original Counter and Post from 24 Sep 2009! June 2013 ‘Social’ Update (mobile, games & heritage to come) Entering the Zettabyte Era  [Visual Networking Index May 29, 2013 This document is part of the Cisco® Visual Networking Index (VNI), an ongoing initiative to track and forecast the impact of visual networking applications. The document presents some of the main findings of Cisco's global IP traffic forecast and explores the implications of IP traffic growth for service providers. web 3.0 « PrePrint ‘The end of the library’ is a catchcry that many studying information studies have had to endure in one form or another over the past five to ten years or so, maybe even longer. Some of the following headlines and related stories point to the continuance of this threat and are an indication that the threat to information provision and libraries is far from over. Clearly, as the articles indicate, this is not specific to Australia but something that is happening in other countries including the United States and the UK. Libraries fear funding cuts Libraries fire up over funding cuts

Twitter as Well-Known as Facebook, Edison Research, Arbitron Rep Twitter is now just as well known as Facebook, though it has far fewer users, says a report titled "Twitter Usage in America 2010" from Edison Research and Arbitron. Nearly nine out of 10 Americans (87 percent) know about Twitter, though just seven percent (17 million total) use it, says the study, which includes three years of tracking data and a telephone survey of 1,753 conducted in February 2010. That 87 percent is compared to just 26 percent who knew about Twitter's existence last year. (Facebook had 88 percent awareness among those surveyed, with 41 percent saying they had a profile.) Despite the relatively small number of users, what respondents said they use Twitter for suggests it could have a powerful effect on your brand.

Curation As Story – The Importance Of Human Filters Curation is a form of storytelling. Curation tools need to support this truth. Collecting content without qualitative human judgement is aggregation, not curation. AOL Acquires Huffington Post for $315 Million AOL has acquired The Huffington Post for $315 million in its biggest move since it became an independent company in 2009. The acquisition will create a new online media conglomerate that already owns news websites TechCrunch and Engadget. According to The New York Times, the deal is worth $300 million in cash with $15 million in stock. As part of the deal, The Huffington Post co-founder Arianna Huffington will be appointed president editor-in-chief of all of AOL's content. She will not only run The Huffington Post, but will lead AOL's news, tech, women, local, multicultural, entertainment video and community content businesses in an AOL entity that will be known as the Huffington Post Media Group.

Puppet state A puppet state is a metaphor of a state that is supposedly independent but is in fact dependent upon an outside power,[1] it is nominally sovereign but effectively controlled by a foreign or otherwise alien power, for reasons such as financial interests, in fact anything but the common good.[2] A puppet state preserves the external paraphernalia of independence like a name, flag, anthem, constitution, law codes and motto but in reality is an organ of another state which created or sponsored the government.[3] Puppet states are not recognised as legitimate under international law.[4] Etymology of the term[edit] In the Middle Ages vassal states existed which were based on delegation of rule of a country from a King to noble men of lower rank. Since the Peace of Westphalia of 1648 the concept of a nation came into existence where sovereignty was connected more to the people who inhabited the land than to the nobility who owned the land. 19th Century[edit]

‘Mind uploading’ featured in academic journal special issue for first time (Credit: stock image) The Special Issue on Mind Uploading (Vol. 4, issue 1, June 2012) of the International Journal of Machine Consciousness, just released, “constitutes a significant milestone in the history of mind uploading research: the first-ever collection of scientific and philosophical papers on the theme of mind uploading,” as Ben Goertzel and Matthew Ikle’ note in the Introduction to this issue. “Mind uploading” is an informal term that refers to transferring the mental contents from a human brain into a different substrate, such as a digital, analog, or quantum computer.