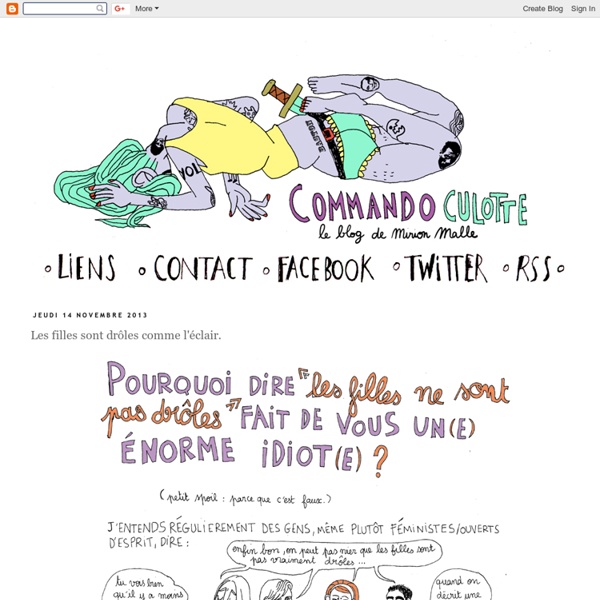 No Kidding: Sexist Jokes Aren't Funny, They're Hostile "What's the difference between a woman and a pay phone? You need a quarter to use a pay phone." "How is a woman like a condom? Both of them spend more time in your wallet than on your dick." Stranger Danger New Comic! TRANSLATIONS:Spanish (Credit: Taller de Teoría Queer) All of the experiences in this comic are either directly from my own life or related to me by people I know and care for. I don’t know, I’m all mad today. Why Women Have So Many Clothes We’re celebrating the end of the year with our most popular posts from 2013, plus a few of our favorites tossed in. Enjoy! @bfwriter tweeted us a link to a college design student’s photograph that has gone viral. Rosea Lake posted the image to her tumblr and it struck a chord. What I like about the image is the way it very clearly illustrates two things.

Can the Damaged Insulin Resistant Horse Be Fixed? You’re worried. You have reason to be. Your horse is exhibiting signs of insulin resistance (regional fat deposits along the neck, down the spine, tailhead, shoulders, chest, or even above the eyes). He is likely overweight (though not always). gabby's playhouse This is a comic that we posted on Playhouse 1.0 a couple years ago that was picked up & tossed around by the internet for a few weeks, and brought by far the most attention to our website of anything we have drawn or will ever draw. At last count it had over 700 comments… but we might have lost them all when we switched databases. REMEMBER: before you comment on this comic, you can avoid being a human cliche by checking this list first.

Sexist Jokes: Still Not Funny Feminism | Posted by Tanvi S on 01/24/2014 Not funny. One of my male teachers has repeatedly made a joke about girls belonging in the kitchen. Why I Am a Black Male Feminist When I was a little boy, my mother and father used to argue a lot. Some mornings, I would wake up to the alarming sound of my parents arguing loudly. The disagreement would continue until my father would yell with finality, "That is it! I'm not talking about this anymore!" The dispute would end right there. My mother never got the last word. Better Identification of Viking Corpses Reveals: Half of the Warriors Were Female Shieldmaidens are not a myth! A recent archaeological discovery has shattered the stereotype of exclusively male Viking warriors sailing out to war while their long-suffering wives wait at home with baby Vikings. (We knew it! We always knew it.) Plus, some other findings are challenging that whole “rape and pillage” thing, too.

History tells us what may happen next with Brexit & Trump – Medium It seems we’re entering another of those stupid seasons humans impose on themselves at fairly regular intervals. I am sketching out here opinions based on information, they may prove right, or may prove wrong, and they’re intended just to challenge and be part of a wider dialogue. My background is archaeology, so also history and anthropology. It leads me to look at big historical patterns.

Exterminate Misogyny: Where are the Feminist Doctor Who Companions? Doctor Who, the show that I consider to be the best of sci-fi, is back on our screens this weekend. In the tradition of holding the things that I love to a high standard, I’d like to take a look at the women in the show, and how they are treated and written. When I set out to examine the women of the show in-depth, a song by British musician and comedian Mitch Benn, called “Doctor Who Girl,” immediately sprang to mind. Here’s a selection of the lyrics: Be my Doctor Who girl,We’ll make a real good team,I’ll do all the thinking,You’ll look good in shorts and scream. Five Jokes About Feminism (That Are Actually Funny) Well, gang, there is some good news and some bad news. The good news is that feminist comedians and feminist critiques of comedy have been all over the news lately! Woo!