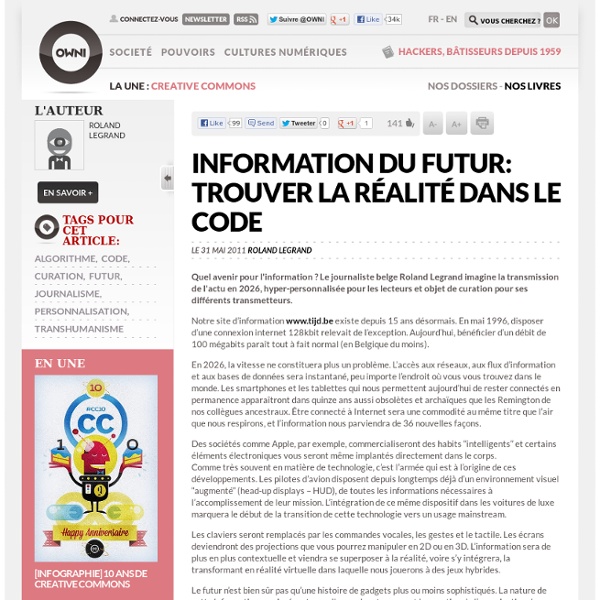 Proceedings Template - WORD A Primer: Enterprise Wisdom Management and the Flow of Understanding ScottCarpenter@CognitiveCybernetics.comCupertino, CA 95014 / (408) 772-2811 1. The Petabyte, Exabyte, Zettabyte, and Yottabyte Scales February 5, 2014 About the Cisco Visual Networking Index Q. Why did Cisco develop the Cisco Visual Networking Index ™ (VNI) Forecast? Content Curators Are The New Superheros Of The Web Yesterday, the ever-churning machine that is the Internet pumped out more unfiltered digital data. Yesterday, 250 million photos were uploaded to Facebook, 864,000 hours of video were uploaded to YouTube, and 294 BILLION emails were sent. And that's not counting all the check-ins, friend requests, Yelp reviews and Amazon posts, and pins on Pintrest. The volume of information being created is growing faster than your software is able to sort it out.

All Headlines - Future of News Future of News Portal Our traditional news media are in trouble. Newspapers are losing advertising revenue, television is losing viewers to the Internet, and journalists are losing their jobs due to rampant cost-cutting. So what is the future of journalism? What are the winning online models? What role will bloggers and citizen reporters play? DIKW The DIKW Pyramid, also known variously as the "DIKW Hierarchy", "Wisdom Hierarchy", the "Knowledge Hierarchy", the "Information Hierarchy", and the "Knowledge Pyramid",[1] refers loosely to a class of models[2] for representing purported structural and/or functional relationships between data, information, knowledge, and wisdom. "Typically information is defined in terms of data, knowledge in terms of information, and wisdom in terms of knowledge".[1] History[edit] "The presentation of the relationships among data, information, knowledge, and sometimes wisdom in a hierarchical arrangement has been part of the language of information science for many years. Although it is uncertain when and by whom those relationships were first presented, the ubiquity of the notion of a hierarchy is embedded in the use of the acronym DIKW as a shorthand representation for the data-to-information-to-knowledge-to-wisdom transformation

Entering the Zettabyte Era  [Visual Networking Index May 29, 2013 This document is part of the Cisco® Visual Networking Index (VNI), an ongoing initiative to track and forecast the impact of visual networking applications. The document presents some of the main findings of Cisco's global IP traffic forecast and explores the implications of IP traffic growth for service providers. For a more detailed look at the forecast and the methodology behind it, please visit Cisco VNI: Forecast and Methodology, 2012-2017. Marketing: Garfield on Why We Will Live in Curation Nation How did I learn about Failblog.org, the greatest endeavor in the history of mankind? From my daughter. How did I encounter Antoine Dodson?

Future Problem Solving Program International Future Problem Solving Program International (FPSPI), formerly known as the Future Problem Solving Program (FPSP), aims to "engage students in creative problem solving". Founded by Dr. Ellis Paul Torrance in 1974, FPSPI was created to stimulate critical and creative thinking skills and to encourage students to develop a vision for the future. FPSPI features curricular and co-curricular competitive, as well as non-competitive, activities in creative problem solving. Data, Information, Knowledge, & Wisdom by Gene Bellinger, Durval Castro, Anthony Mills There is probably no segment of activity in the world attracting as much attention at present as that of knowledge management. Yet as I entered this arena of activity I quickly found there didn't seem to be a wealth of sources that seemed to make sense in terms of defining what knowledge actually was, and how was it differentiated from data, information, and wisdom.