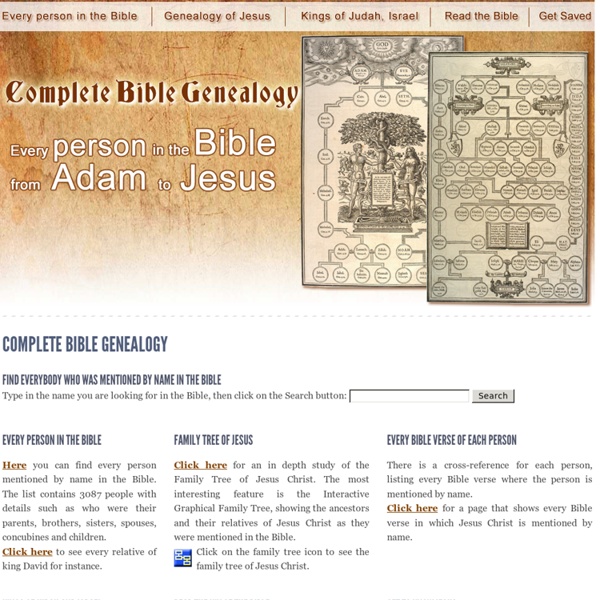 The Bible used to construct the Complete Bible Genealogy website is the "Authorized King James Version, edited by Dr. Blayney of Oxford (1769)". One of the most important parts of this project is to define what source would be used. There are many Bible translations available for us today and people's opinions are widely divided regarding which Bible is more accurate, which is easier to read, which provides better study tools, etc. You may ask, "why is it necessary to have so many versions of the Bible?". The answer emerges when you start to compare the different translations.

Septuagint Index Sacred Texts Bible This is the main index for the Septuagint, the oldest Greek version of the Jewish Bible. To view this section properly, you need to have a Unicode font installed which has full polytonic Greek support. Historical Jesus Theories The purpose of this web page is to explain and explore some of the theories offered up by contemporary scholars on the historical Jesus and the origins of the Christian religion. Issues include the nature of the historical Jesus, the nature of the early Christian documents, and the origins of the Christian faith in a risen Jesus Christ. An attempt has been made to include historical Jesus theories across the spectrum from Marcus Borg to N.T. Wright and to describe these historical Jesus theories in an accurate and concise way. The authors are listed in alphabetical order.

Christian Cram Course: The Bible in Less than a Day - Faith Facts Top of page Introduction Perhaps you have said to yourself that you really ought to learn more about the Bible. But you just never get around to it. Then, this study is for you. Amazing Facts > Media Library English Testimonies of Changed Lives Watch these inspirational stories that will encourage your faith in the Lord. Listen to others like you who found prayer for healing brokenness. These heart-touching testimonies will strengthen you and help you draw closer to God. Amazing Facts Presents

A Pictorial explanation of the Bible Presenting a Historical Chronological Overview of the Bible Click on these Images to study the Bible. Old Testament: In 9 Sub Sections or Modules Genesis part one Genesis part one is the first of seventeen parts we have split the Bible up into so we can explain the Bible in a historical chronological order.......more New Testament: In 8 Sections or Modules Graphics The third edition of The Pilgrim’s Progress, published in 1679, appears to have been the first printing with any illustration. It included what is now known as “the sleeping portrait” which depicted not only Bunyan in a dreaming pose, but also Christian journeying from the City of Destruction toward the Wicket-gate. Subsequent editions have produced a seemingly endless variety of illustrations and graphic representations, also with regard to The Holy War, that in general must be attributed to Bunyan’s stimulation of artistic imagination. Dr. Horner has continued to collect any volumes that display this artistry and anticipates the display of many distinctive drawings, engravings, etc., along with colorized versions, and CD availability. There is also in process of development a Children’s Coloring Book that will provide an enjoyable challenge for the young who so eagerly appreciate the illustrations as a helpful supplement to Bunyan’s writings.

Maps of Prophecy The Ancient World Descendants Of Noah Pangea: The Ancient Continent Pangea: The Breaking Of The Continent Hebrew Glossary Then name Ashkenaz (Bereishit 10:3) has since the 10th century been identified with Germany. As the German and French Jews of the medieval period formed a uniform group in culture and religious customs, they were all referred to as Ashkenazim in contradistinction to the Sefardim or Spanish- Portuguese Jews. Ashkenazim are the people who use Nusach Ashkenaz, the prayer arrangement adopted by the medieval Franco-German Jews, including certain variations described as belonging to the Polish custom (Minhag Polin). In the 18th century, the Chasidic movement adopted the Sefardic arrangement of prayers; hence, the Chasidim have been called Sefardim on many occasions.

Index to the Enciclopedia Heráldica Hispano-Americana of Alberto and Arturo García Carraffa (Hispanic Reading Room, Hispanic Division, Area Studies) The 88 volumes of this work, [Library of Congress Call Number: CR2142.G3] supplemented by a continuing work, offer an immense tribute to the work of indefatigable genealogists. The work treats Spanish heraldry in the first two volumes, and with volume three begins the Diccionario Heráldico y Genealógico de Apellidos Españoles y Americanos, or a listing of over 15,000 names with their respective genealogical histories (with color illustrations of representative crests) of Spanish and Spanish-American families. Please note that on the spine one finds two numbers, the Enciclopedia number followed by the Diccionario number (in other words there is a two volume difference in numbering). Originally begun in 1919, its publishing history continued until 1963 when the last volume encompassing the letter "u" was published as a tribute to her late husband by Margarita Prendes Carraffa. In 1952, a reprinting of the earlier volumes began.

Bible History Online - Bible Maps Bible Maps - Biblical Maps and Historical Geography for Bible Study (Printing Instructions: Open the map, right click and print) About Bible Maps Maps are essential for any serious Bible study, they help students of the Scriptures understand the geographical locations and historical backgrounds of the places mentioned in the Bible. Hebrew Alphabet The Hebrew and Yiddish languages use a different alphabet than English. The picture below illustrates the Hebrew alphabet, in Hebrew alphabetical order. Note that Hebrew is written from right to left, rather than left to right as in English, so Alef is the first letter of the Hebrew alphabet and Tav is the last. The Hebrew alphabet is often called the "alefbet," because of its first two letters.

JacobBoerema.nl: TRANSCRIPT : petit programme gratuit pour aider à la transcription Welcome to Transcript 2.4, a program designed to help you to transcribe the text on digital images of documents. Transcript is free for private non commercial use . In all other cases it costs 15 euro.