Study Guide for Hebrews 7 by David Guzik. A. 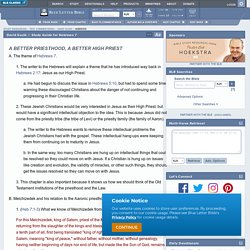 The theme of Hebrews 7. 1. The writer to the Hebrews will explain a theme that he has introduced way back in Hebrews 2:17: Jesus as our High Priest. a. He had begun to discuss the issue in Hebrews 5:10, but had to spend some time warning these discouraged Christians about the danger of not continuing and progressing in their Christian life. 2. A. B. 3. B. 1. For this Melchizedek, king of Salem, priest of the Most High God, who met Abraham returning from the slaughter of the kings and blessed him, to whom also Abraham gave a tenth part of all, first being translated "king of righteousness," and then also king of Salem, meaning "king of peace," without father, without mother, without genealogy, having neither beginning of days nor end of life, but made like the Son of God, remains a priest continually. a.

I. B. I. C. D. I. E. I. F. I. Ii. G. 2. Now consider how great this man was, to whom even the patriarch Abraham gave a tenth of the spoils. A. B. I. C. The Parables of Jesus: Intro and List. The parables of Jesus are found in the three synoptic gospels (Matthew, Mark, and Luke) and the Gospel of Thomas. 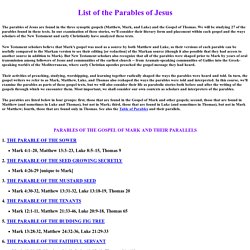 We will be studying 27 of the parables found in these texts. In our examination of these stories, we'll consider their literary form and placement within each gospel and the ways scholars of the New Testament and early Christianity have analyzed these texts. New Testament scholars believe that Mark's gospel was used as a source by both Matthew and Luke, so their versions of each parable can be usefully compared to the Markan version to see their editing [or redaction] of the Markan source (though it also possible that they had access to another source in addition to Mark).

Their activities of preaching, studying, worshipping, and learning together radically shaped the ways the parables were heard and told. In turn, the gospel writers we refer to as Mark, Matthew, Luke, and Thomas also reshaped the ways the parables were told and interpreted. Mark 4:26-29 [unique to Mark] Synoptic Gospel Parallels - Synoptic Gospels Comparison. What Do We Know about the Apostle Philip? - Disciples. About Greg Laurie The interesting thing about Philip, one of the Twelve, is that he was personally reached by Jesus himself. 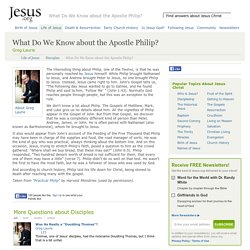 While Philip brought Nathanael to Jesus, and Andrew brought Peter to Jesus, no one brought Philip to Jesus. Instead, Jesus came right to him. John’s Gospel tells us, “The following day Jesus wanted to go to Galilee, and He found Philip and said to him, ‘Follow Me’ ” (John 1:43). Normally God reaches people through people, but this was an exception to the rule. We don’t know a lot about Philip. Did Jesus Contradict Himself about Who’s on His Side?

Are they for us or against us—which way does it work? 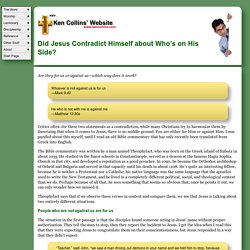 Whoever is not against us is for us —Mark 9:40 He who is not with me is against me —Matthew 12:30a Critics often cite these two statements as a contradiction, while many Christians try to harmonize them by theorizing that when it comes to Jesus, there is no middle ground. You are either for Him or against Him. I was puzzled about this myself, until I read an old Bible commentary that has only recently been translated from Greek into English. Paulromanslaw. Is Paul consistent in his attitude to the Jewish Law? 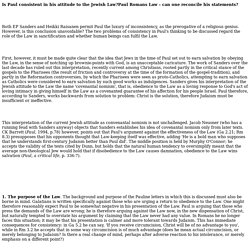 Paul Romans Law - can one reconcile his statements? Both EP Sanders and Heikki Raisanen permit Paul the luxury of inconsistency, as the prerogative of a religious genius. However, is this conclusion unavoidable? The two problems of consistency in Paul's thinking to be discussed regard the role of the Law in sanctification and whether human beings can fulfil the Law.

Paul never said the Law was abolished. Read for yourself. The following is a collection of clear scriptures showing that Paul never taught that we are free to disobey the Law (Hebrew: Torah). 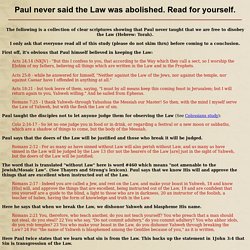 I only ask that everyone read all of this study (please do not skim thru) before coming to a conclusion. First off, it's obvious that Paul himself believed in keeping the Law: Acts 24:14 (NKJV) - "But this I confess to you, that according to the Way which they call a sect, so I worship the Elohim of my fathers, believing all things which are written in the Law and in the Prophets. The Gospel of Jesus Christ. P M-J Lagrange OP. Chapter 3: The Ministry in Galilee. Part II: 5 conflicts with the Pharisees. THE GOSPEL OF JESUS CHRIST- in two volumes - by PÃ¨re M. 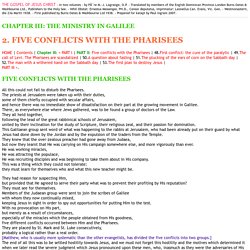 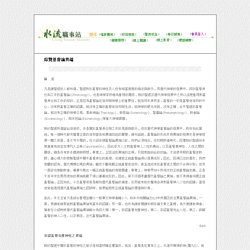 Miracles of Jesus. There were many miracles associated with Jesus, including his birth and resurrection. 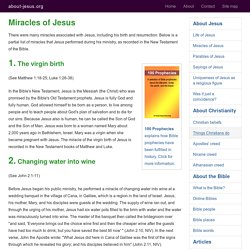 Below is a partial list of miracles that Jesus performed during his ministry, as recorded in the New Testament of the Bible. 1. Finding Jesus in the Feast of Tabernacles. David Brickner Jews for Jesus CBN.com – God gave the biblical festivals to teach the Jewish people about His character and to help us understand His plan of salvation. 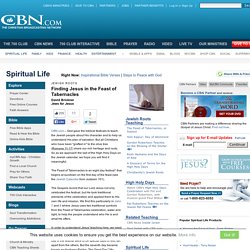 But all Christians who have been "grafted in" to the olive tree (Romans 11:17) share our rich heritage and roots. So as we approach the last of the High Holy Days on the Jewish calendar, we hope you will find it meaningful. The Feast of Tabernacles is an eight day festival* that begins at sundown on the first day of the feast (see the Jewish Calendar from Judaism 101). The Gospels record that our Lord Jesus not only celebrated the festival, but He took traditional elements of the celebration and applied them to His own life and mission. In order to understand Jesus' teaching here, we need a bit of background from Leviticus 23. The Power of Grace: The Signs in John's Gospel.

More than once, and most recently just a couple of weeks ago, I have read or been told, “If the god you believe in exists, I would not worship him because he would be a moral monster.” Interestingly, while such statements are made by atheists decrying the “Christian” god, I have more often heard this from angry Arminians who are offended I believe God chose certain people to save before the foundation of the world (Eph. 1:4), gave them to the Son (John 17:6), wrote their names in the Book of Life before creation (Rev. 17:8), irresistibly draws them (John 6:37), and both justifies and glorifies them despite their manifold faults and the Devil’s interference (Rom. 8:29-30). Moral monster, indeed. There is a larger issue at stake here, one more basic than the topics commonly claiming attention.

We worship God because He is God: almighty, creator, sovereign, and holy (Psa. 96). We love God because He is good: gracious, merciful, slow to anger, and abounding in mercy (1John 4:8-10). The Purpose of the Gospel of John. Introduction Of the four gospels, John’s gospel presents Jesus as God most forcefully. John explicitly declared Jesus to be God (John 1.1) who brought all things into existence (John 1.3). John’s gospel confirmed that Jesus was YHVH of the Jews (John 8.57-58). He is light (John 1.4, 8.12) and life (John 1.4, 5.26, 14.6). As a vehicle to demonstrate that Jesus was the Messiah and Son of God, John crafted his gospel with eight signs–seven pre-resurrection and one post-resurrection and seven “I Ams.” Seven signs were prior to Christ’s resurrection. Explaining Away the Greatest Miracle of Jesus' Ministry.

Posted by Jimmy Akin on Thursday Sep 20th, 2012 at 10:03 PM Of all the many miracles Jesus performed during his earthly ministry (that is, before his passion, death, and Resurrection), there is one that stands out: the feeding of the five thousands. Unlike any other miracle from his ministry, this one is recorded in all four gospels is the feeding of the five thousand. You would think that people would have a handle on the fact that this was a miracle--an unmistakable supernatural intervention in the order of nature.

Yet every year we are subjected to homilies that try to explain it away as a natural event, suggesting that all Jesus really did was motivate people to share the food that they had with them, so it was really a "miracle of sharing" rather than a miraculous multiplication of loaves. I've written about the subject before, but let's see what Pope Benedict and Pope John Paul II have to say about the matter . . . Lesson 27: Is Jesus Crazy or is He God? (John 5:17-23) Editor's Note: Apologies for the audio quality. The recording encountered technical difficulties. Please bear with the inconvenience, thankfully the manuscript is also available below. September 15, 2013 You’ve probably heard liberal professors or theologians say that Jesus never claimed to be God.

2. Major Differences Between John and the Synoptic Gospels. Introduction: The Relationship of John's Gospel to the Synoptics. Two basic positions on the relationship of John’s Gospel to the Synoptics are possible: Major Differences: 1. Berith Road: The Theme of Judgment in the Gospel of John. The theme of judgment is a theme of medium priority in John’s Gospel overall, but the amount of space devoted to the theme of judgment is surprisingly large all the same. Of greatest polemical significance is the idea that Jesus has a special role to play in God’s work of judgment. Even though the Father is both King and Judge, he has “given all judgment to the Son” (John 5:22).

This corresponds to Paul’s teaching that on the day of judgment each person will be called to stand before the judgment seat of Christ to give an account of what they have done (2 Cor 5:10). Untitled. Spir-john. On What "Condemnation" Really Means. Why did Jesus Christ heal on the Sabbath days? By Shawn Brasseaux. The 31 Individual Healings of Jesus Christ. Bible Study - July 1999. Lesson 57: Why Jesus Hates Legalism (Luke 11:37-54) There is probably no sin more tolerated or more widespread in the Christian world than legalism. It may surprise you to hear it labeled as sin.

Legalists are thought to be a bit overzealous or “uptight,” but they aren’t usually thought of as sinning in the same sense as adulterers, thieves, liars, and the like. To the contrary, legalists seem to be concerned about holiness. Bible study Colossians 1:15-23: The Pre-eminence of Jesus and the Wonders of God. Bible Studies in Colossians. 13. Raising the Widow’s Son From Nain. B. Between Jesus and Paul: Studies in the Earliest History of Christianity - Martin Hengel - Google 圖書. Jesus, Debt, and the Lord's Prayer: First-Century Debt and Jesus' Intentions - Douglas E. Oakman - Google Books.

Gospel of John Commentary: Who Wrote the Gospel of John and How Historical is It? John and the Synoptics. 何謂約翰福音？作者是誰？ Amen, Amen Sayings in the Fourth Gospel. The Sacred Page: "I am the Bread of Life": Readings for the Nineteenth Sunday in Ordinary Time. 4 Bible verses about The New Covenant. The New Covenant in a Nutshell. The Difference in Calling Jesus ‘Savior’ and ‘Lord’ and its Implications for Discipleship. Another Look at the “Lamb of God” Jesus as a Figure in History: How Modern Historians View the Man from Galilee - Mark Allan Powell - Google Books. Apostolic Letter Mane nobiscum Domine. The Original Hebrew word for "sin" has been wrongly translated... Its true meaning will pleasantly surprise you! John The Baptist - Unification Theology - Young Oon Kim. Was John the Baptist really Elijah? A Christian Bible Study : John the Baptist.

How long was Jesus’s earthly ministry? Repent: what does that mean? More on that Empty Tomb–Our Earliest Witness Weighs In. That Empty Tomb. 誰給我們把石頭從墓門滾開呢？ The Trial of Jesus: An Account. "BETWEEN TWO THIEVES" The Last Supper (Leonardo da Vinci)