E-Sword - the Sword of the LORD with an electronic edge 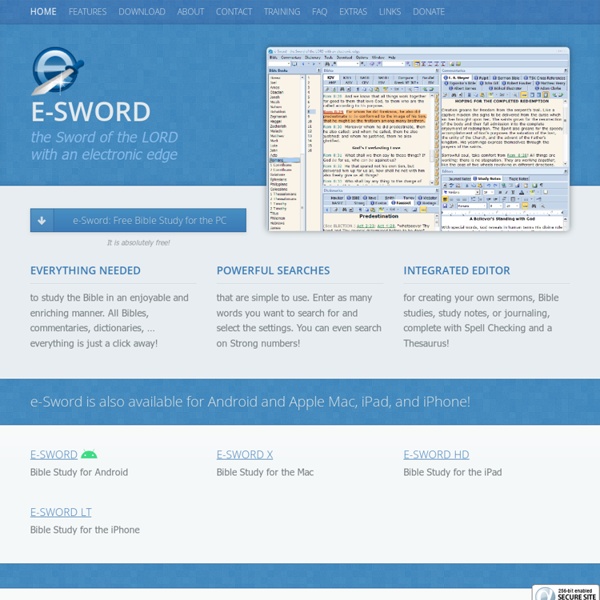 Learning New Testament Greek: Nouns, Articles, and Position We have already defined nouns in a previous lesson, but let's repeat the definition here: Nounsare words that describe people, places, or things. Here are some English nouns: book, person, chewing-gum, country, county, city, road, field, justice, peace, language, concept, man, woman, god, programmer, linguist. MS-DOS help and commands Short for Microsoft Disk operating system, MS-DOS is a non-graphical command line operating system created for IBM compatible computers that was first introduced by Microsoft in August 1981 and was last updated in 1994 when MS-DOS 6.22 was released. Although the MS-DOS operating system is not often used today, the command shell commonly known as the Windows command line is still used and recommended. Continue reading >> Tip: If you are new to MS-DOS or the Windows command line we suggest reading how to use the Windows command line (DOS).

30 Cool Educational iPad Apps for Science Lovers - Creative Can Creative Can If you are a student, a teacher, a parent or just a science enthusiast, you can now expand your knowledge about science in a somewhat enjoyable and convenient method using your iPad. By downloading educational iPad apps designed for science learning, you can have access to vast storehouse of knowledge right there on your tablet. You just have to tap your iPad and there you are, exploring the realms of science in a fun, exciting, colorful and in some cases, realistically illustrated method.

Free Christian Books to Download Most of the following books are only available in electronic form (i.e., they are not available to be purchased in hard copy at this time), and may be freely downloaded and circulated with the one requirement that they must be distributed with the copyright information intact. There are some shorter articles and also non-English language books available. Christian Leadership University also hosts Spirit-anointed scholarly free books and articles.

Hebrew Lexicon The Old Testament Hebrew lexicon is Brown, Driver, Briggs, Gesenius Lexicon; this is keyed to the "Theological Word Book of the Old Testament." Also included are pronunciations of each word with alternate pronunciations if available. Bible Study Tools offers two Bible versions, King James and New American Standard, for studying within the Old Testament lexicons. NOTE: In order to see the actual Greek and Hebrew characters you must download and install the free BST Fonts. Click here to view the BST Fonts page. The Hebrew Lexicon has been designed to help the user understand the original text of the Bible. Nextdoor Villages of Piedmont: The website for Villages of Piedmont residents Nextdoor for Android Get it on Google Play There was a problem connecting your Facebook account.

Apps for Grading Assessments Using rubrics and providing student's feedback via the iPad has not been an area that has received a great deal of attention. This is, however, starting to change. I have recently spoken to a number of teachers who have developed apps that will allows teachers to use the iPad as a viable way of assessing student work. Some of these apps actually do more than just mark work. Chris Harrison - Visualizing the Bible This set of visualizations started as a collaboration between Christoph Römhild and myself. Christoph, a Lutheran Pastor, first emailed me in October of 2007. He described a data set he was putting together that defined textual cross references found in the Bible. 365 Messianic Prophecies 1. Genesis 3:15.....Seed of a woman (virgin birth).....Luke 1:35, Matthew 1:18-20 2. Genesis 3:15.....He will bruise Satan's head.....Hebrews 2:14, 1 John 3:8 3. Genesis 5:24....The bodily ascension to heaven illustrated....Mark 6:19 4.

Earn points for savings on gift cards, name-brand merchandise and more with Rewards for Good SWEEPSTAKES RULES: NO PURCHASE NECESSARY. PURCHASE WILL NOT INCREASE YOUR CHANCES OF WINNING. Open to AARP account holders who are enrolled in the Rewards for Good Program, who are 50 U.S./D.C. residents (excluding Florida), 18 or older at time of entry. Golgotha (Calvary) Calvary, also Golgotha /ˈɡɒlɡəθə/, was, according to the Gospels, a site immediately outside Jerusalem's walls where Jesus was crucified. Golgotha is the Greek transcription in the New Testament of an Aramaic term that has traditionally been presumed to be Gûlgaltâ (but see below for an alternative). The Bible translates the term to mean place of [the] skull, which in Greek is Κρανίου Τόπος (Kraníou Tópos), and in Latin is Calvariæ Locus, from which the English word Calvary is derived. Biblical references and etymology[edit] Altar at the traditional site of Golgotha The altar at the traditional site of Golgotha.

Hebrew Alphabet The Hebrew and Yiddish languages use a different alphabet than English. The picture below illustrates the Hebrew alphabet, in Hebrew alphabetical order. Note that Hebrew is written from right to left, rather than left to right as in English, so Alef is the first letter of the Hebrew alphabet and Tav is the last. The Hebrew alphabet is often called the "alefbet," because of its first two letters. NOVA The 100-Year-Old Idea That Could Change Flight Inspired by birds, bats, and the Wright brothers, engineers are building the next breakthrough in aviation. From NOVA Next | Feb 22, 2017 Key Brain Regions Found To Be Smaller in People With ADHD In the largest study of its kind, research shows people with ADHD have smaller brain regions—including the amygdala, which is responsible for regulating emotions.

hodder faith Compelling and definitive portrait of the life of C. S. Lewis to mark the 50th anniversary of his death.For more than half a century, C. S. Lewis's Narnia series has captured the imagination of millions. In C.