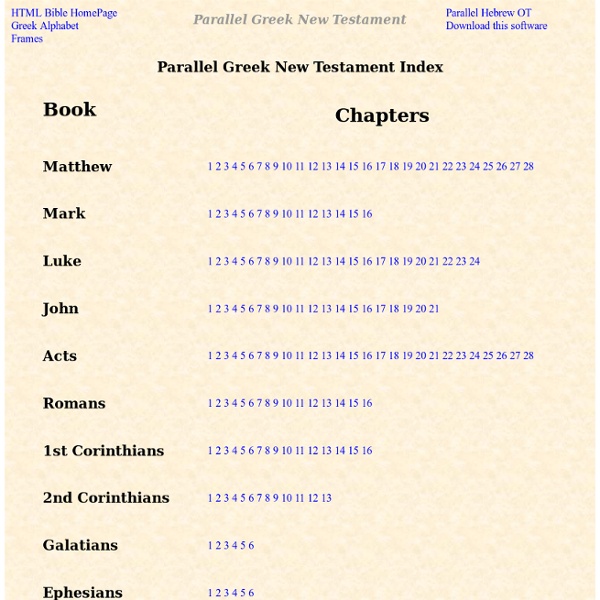 Hebrew Lexicon The Old Testament Hebrew lexicon is Brown, Driver, Briggs, Gesenius Lexicon; this is keyed to the "Theological Word Book of the Old Testament." Also included are pronunciations of each word with alternate pronunciations if available. Bible Study Tools offers two Bible versions, King James and New American Standard, for studying within the Old Testament lexicons. NOTE: In order to see the actual Greek and Hebrew characters you must download and install the free BST Fonts. Click here to view the BST Fonts page. The Hebrew Lexicon has been designed to help the user understand the original text of the Bible. The Hebrew Lexicon can be searched in three ways: * By Strong's Numbers: If you know the number of the entry you desire to see, you can enter it into the text box and click "Search" to view that entry These files are public domain.

Learning New Testament Greek: Nouns, Articles, and Position We have already defined nouns in a previous lesson, but let's repeat the definition here: Nounsare words that describe people, places, or things. Here are some English nouns: book, person, chewing-gum, country, county, city, road, field, justice, peace, language, concept, man, woman, god, programmer, linguist. In the first lesson, we learned a few Greek nouns: Articlesare those little words in front of the noun. In English, there are two articles: "the" is the definite article, and "a" is the indefinite article. Positionmeans just what the word implies, and refers to the position with respect to the article and a noun. Nouns A full understanding of Greek nouns requires us to know some Greek nouns. When you learn nouns, always learn the form of the article that goes along with it. Let's get out the good old gizmoand practice these nouns: And now let's translate from English into Greek: Now let's learn a second set of nouns: Practice by translating the Greek into English: Subject first: Matt 4:4

Hebrew for Christians - Learn Hebrew for FREE! Hebrew Alphabet The Hebrew and Yiddish languages use a different alphabet than English. The picture below illustrates the Hebrew alphabet, in Hebrew alphabetical order. Note that Hebrew is written from right to left, rather than left to right as in English, so Alef is the first letter of the Hebrew alphabet and Tav is the last. Letters of the Alefbet Table 1: The Hebrew Alphabet If this sounds like Greek to you, you're not far off! The "Kh" and the "Ch" are pronounced as in German or Scottish, a throat clearing noise, not as the "ch" in "chair." Note that there are two versions of some letters. Vowels and Points Like most early Semitic alphabetic writing systems, the alefbet has no vowels. However, as Hebrew literacy declined, particularly after the Romans expelled the Jews from Israel, the rabbis recognized the need for aids to pronunciation, so they developed a system of dots and dashes called nikkud (points). Table 2: Vowel Points Most nikkud are used to indicate vowels. Vowel points are shown in blue.

Home Page Skip Heitzig's teaching library | SkipHeitzig.com The world is filled with Apple's i-technology, which delivers on its promise to make connectivity and information readily accessible. But there is a deeper need within everyone, a thirst to be right with God, that no app or gadget can fulfill. How ironic that Jesus, the great Thirst-Quencher, would Himself be thirsty. LIListen to this teaching WAWatch this teaching DLDownload this teaching ARView series archives BUYPurchase this teaching EMEmail to friend FBShare on Facebook TWShare on Twitter Purchase Skip's teachings The Through the Bible Teaching Library contains 729 full-length sermons from Pastor Skip Heitzig covering the entire Bible. Only $25.00 BYPurchase this offer Deep and Wide is an anthology of 500 complete weekend teachings given by Skip over a number of years. Only $18.00 BYPurchase this offer Tune In to Watch Skip's Live Teachings To view the live services from Calvary Albuquerque, click on the LIVE NOW link that appears on the website 15 minutes before all live services.

Hebrew Glossary Then name Ashkenaz (Bereishit 10:3) has since the 10th century been identified with Germany. As the German and French Jews of the medieval period formed a uniform group in culture and religious customs, they were all referred to as Ashkenazim in contradistinction to the Sefardim or Spanish- Portuguese Jews. Ashkenazim are the people who use Nusach Ashkenaz, the prayer arrangement adopted by the medieval Franco-German Jews, including certain variations described as belonging to the Polish custom (Minhag Polin). The Ashkenazim in Eastern Europe developed an intense religious life, disseminating Talmudic scholarship among the people to a degree never before surpassed in Jewish history. Chasidim and Mithnaggedim and followers of the Haskalah movement (Maskilim) presented a changing pattern of types, trends and ideologies. The vitality of the Ashkenazim still dominates wherever they are transplanted.

365 Messianic Prophecies 1. Genesis 3:15.....Seed of a woman (virgin birth).....Luke 1:35, Matthew 1:18-20 2. Genesis 3:15.....He will bruise Satan's head.....Hebrews 2:14, 1 John 3:8 3. And for leap year, you can have Psalm 21 as a Messianic Hymn and David's praise. God is Spirit and Light. List Derived from below: Jimmy Swaggart Study Bible English Hebrew Dictionary Babylon's proprietary English-Hebrew dictionary is a great contribution to the Hebrew language lexicography. It is extensive in its scope and absolutely free of charge! This advanced English-Hebrew dictionary offers you access to clear Hebrew word translations covering: Hebrew Slangs. English to Hebrew translation of technical terms and specialized jargons. Babylon's English-Hebrew Dictionary is an essential tool for those learning the Hebrew language or need a quick-to-use reference when reading Hebrew texts. If full text Hebrew translation is what is on your mind, you can enjoy Babylon's free translation tool where you can translate full sentences, texts and phrases from and to Hebrew. By retrieving results from Babylon's professional English Hebrew dictionaries, developed by our own linguistic team, we can assure a comprehensive inventory of English Hebrew terms from a vast variety of subjects and all walks of life.

Study Tools "Let them praise the name of the LORD: for his name alone is excellent; his glory [is] above the earth and heaven." Psa 148:13 In the Old Testament times, a name was not only identification, but an identity as well. Who is God to you? Is He your Most High God, All sufficient One, Master, Lord of Peace, the Lord Who Will Provide? Hallowed be Your name? To hallow a thing is to make it holy or to set it apart to be exalted as being worthy of absolute devotion. (el shad-di') All-Sufficient One, Lord God Almighty Use in the Bible: In the Old Testament El Shaddai occurs 7 times. Variant spellings: None TWOT Reference: 2333 Strong's Reference: H7706 El Shaddai in the Septuagint: theou saddai - God Shaddai; pantokratôr (for Shaddai) - the Almighty Meaning and Derivation: El is another name that is translated as "God" and can be used in conjunction with other words to designate various aspects of God's character. (el el-yone') The Most High God TWOT Reference: 1624g, 1624h Strong's Reference: H5945

Fox's Book of Martyrs Edited by William Byron Forbush This is a book that will never die -- one of the great English classics. . . . Reprinted here in its most complete form, it brings to life the days when "a noble army, men and boys, the matron and the maid," "climbed the steep ascent of heaven, 'mid peril, toil, and pain." "After the Bible itself, no book so profoundly influenced early Protestant sentiment as the Book of Martyrs. Contents