The Enigma of Calvinism. Calvinism, from my first exposure to its teachings and practices to and through today, has not ceased to be an enigma to me. 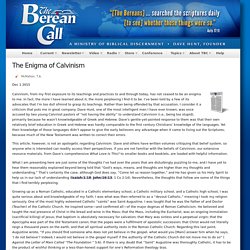 In fact, the more I have learned about it, the more perplexing I find it to be. I’ve been told by a few of its advocates that I’m too dull of mind to grasp its teachings. Rather than being offended by that accusation, I consider it a criticism that puts me in great company. Dave Hunt, one of the most intelligent men I have ever known, was once accused by two young Calvinist pastors of “not having the ability” to understand Calvinism (i.e., being too stupid), primarily because he wasn’t knowledgeable of Greek and Hebrew. Dave’s gentle-yet-pointed response to them was that their own relatively brief education in Greek and Hebrew was hardly comparable to the first century Christians’ knowledge of the languages. WATCH UNTO PRAYER. The KJV audio Bible (free download) GENEVA BIBLE 1599. Analysis of Romans 9 and Calvinistic Arguments. Introduction While studying Bible passages about Calvinism, God's sovereignty, and man's free will, Calvinists frequently turn to Romans 9 as a favorite proof-text. 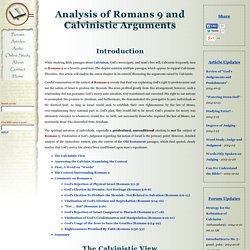 The chapter contains multiple passages, which appear to support Calvinism. Therefore, this article will analyze the entire chapter in its context, discussing the arguments raised by Calvinists. Articles. The Gunpowder Plot of 1605. [Note: Some spelling from James' Workes has been modernized for ease of reading. 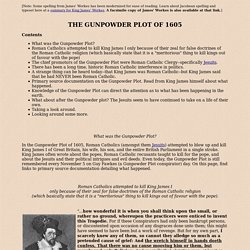 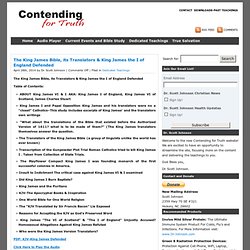 Verse by Verse Bible Teaching Podcast. A New Earth, Ancient Deception. By Marcia Montenegro (page 2 of 3)Written April/May 2008 Earlier in the book, Tolle says that "sin" means "to miss the mark" in Greek, which is true. 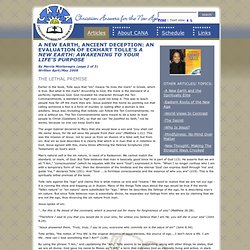 But what is the mark? According to God, the mark is the standard of a perfectly righteous God. God revealed his character through the Ten Commandments, a standard so high man could not keep it. The Law of Moses and the Christian. This teaching from the early Church on the Law of Moses is crucial. 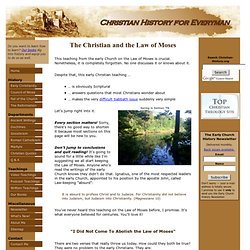 Nonetheless, it is completely forgotten. No one discusses it or knows about it. Despite that, this early Christian teaching … … is obviously Scriptural … answers questions that most Christians wonder about … makes the very difficult Sabbath issue suddenly very simple. Not by Faith Alone: The Martin Luther Paradox. Martin Luther struggled greatly with James' "not by faith alone" (Jam. 2:24). 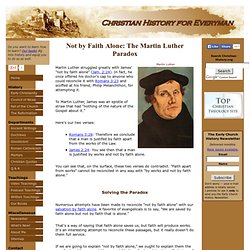 Tradition and the Bible. By COGwriter Should Christians rely on the Bible or tradition for doctrine? 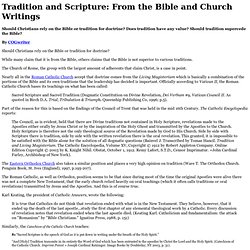 Luther's "sin boldly" Did Luther say, “Be a sinner and sin boldly”? 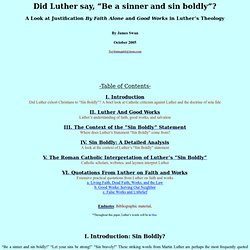 A Look at Justification By Faith Alone and Good Works in Luther’s Theology By James Swan October 2005 Tertiumquid@msn.com -Table of Contents- Luther and the canon 3. NTRmin.org Luther’s View of the Canon of Scripture Tertiumquid@msn.com August 2004 -Table of Contents- Introduction: Playing The "Luther Card" 1: Martin Luther Did Not Remove Books From The Bible: Was Martin Luther a sixteenth century Marcion? 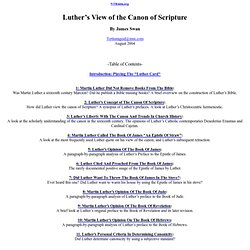 Luther and the canon 3. Sola Scriptura or Prima Luther? What Did Martin Luther Really Believe About the Bible? By COGwriter Most people realize that the genuine true Church of God cannot be part of the Roman Catholic Church. However, some do not realize that the genuine Church of God is not part of the Protestant reformation movement led by Martin Luther (our history predates Luther, and the actual Roman Catholic Church for that matter, please see the History of Early Christianity). Regarding the Bible, those in the real Church of God believe that "All Scripture is given by inspiration of God and, and is profitable for doctrine" (II Timothy 3:16, NKJV throughout unless otherwise stated). Psalm 73 Parallel Chapters. Merciful Truth : Possessing The Holy Land, The Divine City. For two thousand years - since Jesus Christ's death and resurrection - the world has been standing at the brink of its own demise, according to the Christian prophets within their chosen denominations.

Prediction after prediction has failed to bring to pass Jesus Christ's arrival and the world's end. Prominent Christian prophecy interpreters have provided dates (sometimes down to the specific day) to their eager followers when Jesus would return, or when the "final battle" of Armageddon would occur. Such leaders include Jerry Falwell, Pat Robertson, Hal Lindsey, Jack Van Impe, Herbert W. Armstrong, Sun Myung Moon, The Jehovah's Witnesses and the list goes on. When they are wrong, the Christian world shrugs and awaits their next predictions with awe. The Greek Words "aion" and "aionios," do these words mean "eternal" or "everlasting"? Truth About the Talmud: Judaism's Holiest Book. Satanic Verses Of The Jewish Talmud. Is “Holy Writ” for the Jews. List of Bible Scriptures about usury. (All references are from the New King James Bible) 25 " If you lend money to any of My people who are poor among you, you shall not be like a moneylender to him; you shall not charge him interest. 26 "If you ever take your neighbor's garment as a pledge, you shall return it to him before the sun goes down. 27 "For that is his only covering, it is his garment for his skin.