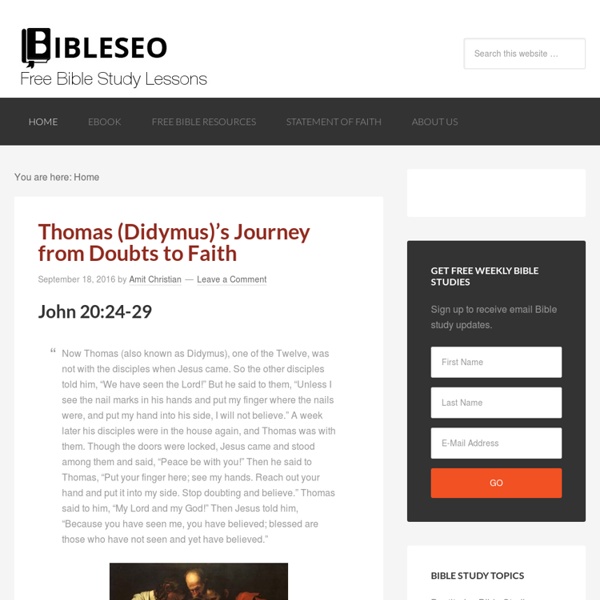 Bible Study Lesson on Matthew 22: 15-22 It is that time of a year. Do you know what is this season for? You might wonder it’s a ‘Spring’ season. Well, you are right, but it is also a time of ‘Tax Season’!s Around March-April of each year, most people in America file their taxes, many even waiting till the last moment!

The ‘Gospel’ According to Rome In Romans 11:6 , Paul says of salvation, “But if it is by grace, it is no longer on the basis of works, otherwise grace is no longer grace.” By contrast, Roman Catholicism finds itself in the impossible position of advocating a gospel in which salvation is offered both by grace and also on the basis of works. Christian Cram Course: The Bible in Less than a Day - Faith Facts Top of page Introduction Perhaps you have said to yourself that you really ought to learn more about the Bible. But you just never get around to it. Then, this study is for you.

Bibles The Bible and the codex initially took shape within a Roman Empire that stretched from Syria to Scotland. Greek and Latin were the literary languages, and by fourth century Christianity was the state religion. In the early Middle Ages individual nations began to emerge, with their own languages, cultures, and religious traditions—orthodox Christian, heretical, and pagan—all influencing the ways in which Bible and book were perceived and produced. Still, the concept of "empire" continued to haunt ambitious leaders who saw faith as a way to unite their diverse subjects.

Topical Bible - Bible Verses by Topic This Bible is a mashup of the Yahoo! and ESV Bible web services. It searches the Internet for the topics that interest people, many of which you’d never find in a traditional topical Bible. Lesson 1 Intro To Genesis Details Category: Genesis Week 1, INTRODUCTION Today we start a journey that millions of Hebrews and Christians have taken over the last 3000 years.

Barnabas: An Encouraging Early Church Leader This is the first of two posts written by Dr. Robin Branch on Barnabas, an early church leader. The blogs are condensed from a longer article by Dr. Branch entitled, “Barnabas: Early Church leader and model of encouragement.” A Pictorial explanation of the Bible Presenting a Historical Chronological Overview of the Bible Click on these Images to study the Bible. Old Testament: In 9 Sub Sections or Modules Genesis part one Genesis part one is the first of seventeen parts we have split the Bible up into so we can explain the Bible in a historical chronological order.......more New Testament: In 8 Sections or Modules New Testament Greek Hell, Hades, Gehenna, and the Realm of the Dead (Acts 2:27) Hell is a slippery concept; and no, I’m not talking about recent debates. I am talking about what the word ᾅδης means. I was reminded of this in reading the NIV of Acts 2:27.

God, Einstein And Games Of Chance : 13.7: Cosmos And Culture iStockphoto.com "God doesn't play dice." I'm sure the reader has heard this famous saying from Einstein in a 1926 letter to fellow physicist Max Born. Perhaps not so clear to most people is what God and what dice Einstein was referring to. Maps of Prophecy The Ancient World Descendants Of Noah Pangea: The Ancient Continent Pangea: The Breaking Of The Continent