The Extinction Protocol: 2012 and beyond 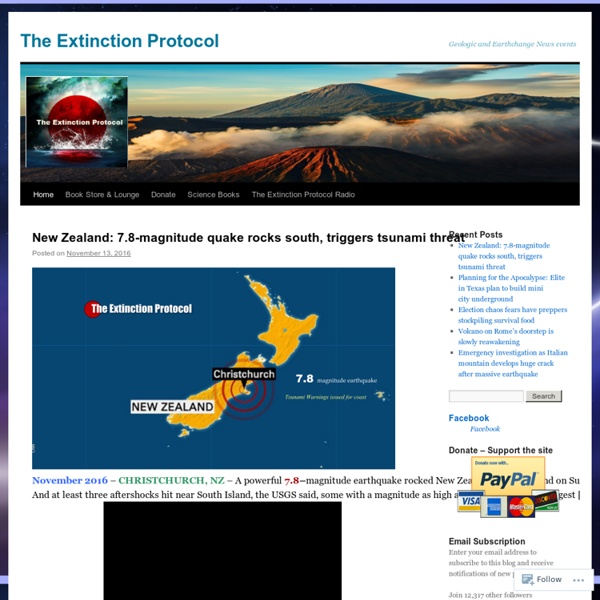 Giant Ribbon Discovered at the Edge of the Solar System + Play Audio | + Download Audio | + Join mailing list October 15, 2009: For years, researchers have known that the solar system is surrounded by a vast bubble of magnetism. Called the "heliosphere," it springs from the sun and extends far beyond the orbit of Pluto, providing a first line of defense against cosmic rays and interstellar clouds that try to enter our local space. Although the heliosphere is huge and literally fills the sky, it emits no light and no one has actually seen it. Until now.

Full-Blown Civil War Erupts On Wall Street - Financial Elite Start Turning On Each Other Reality Finally Hits The Financial Elite As They Start Turning On Each Other 6th September 2011 By David DeGraw - ampedstatus.org Finally, after trillions in fraudulent activity, trillions in bailouts, trillions in printed money, billions in political bribing and billions in bonuses, the criminal cartel members on Wall Street are beginning to get what they deserve. As the Eurozone is coming apart at the seams and as the US economy grinds to a halt, the financial elite are starting to turn on each other. The lawsuits are piling up fast.

The Curious Case of Comet Elenin: A Skywatching Tale Russian amateur astronomer Leonid Elenin had the good fortune to discover a comet on Dec. 10, 2010, and it's turned out to be quite a skywatching curiosity. Initially, comet Elenin received quite a bit of attention from astronomers because its orbit would take it quite close to Earth, within 22 million miles (35 million kilometers), on Oct. 16, 2011. It looked like it was going to put on a good show. Astronomers Get First Peek at Atmosphere of a "Super-Earth" Exoplanet Someday in the coming years, if astronomers finally succeed in locating a virtual Earth twin outside the solar system—a tiny dot of a world at a temperate, life-enabling distance from a sunlike star—the achievement will hardly be cause for resting on observational laurels. Instead another race will begin: to characterize the planet and its atmosphere and to determine if the world is truly habitable or, tantalizingly, if it is already inhabited by some extraterrestrial life-form. In the meantime, astronomers are honing their techniques on the closest thing available—so-called super-Earths, just a few times the mass of our own planet, which are too hot to be habitable but are interesting in their own right. To that end, a team of researchers has managed to capture the light spectrum of a super-Earth backlit by its host star.

Executive Summary Damages from storms, flooding, and heat waves are already costing local economies billions of dollars—we saw that firsthand in New York City with Hurricane Sandy. With the oceans rising and the climate changing, the Risky Business report details the costs of inaction in ways that are easy to understand in dollars and cents—and impossible to ignore. Risky Business Project Co-Chair Michael R. Bloomberg1