Celestial happenings you can see from your own backyard 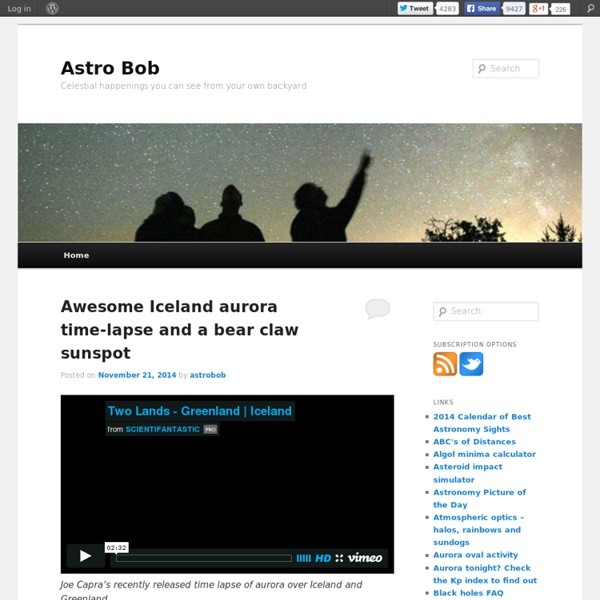 BBC Space – Explore the planets, black holes, stars and more Solar System Visualization Project Solar System Visualization(SSV) ProjectScience Collaboration Testbed (SCT) Task Significant and Additional Content: Mars Science Update - Mars: An Active Planet Today? Malin Space Science Systems Super Resolution Mars Pathfinder Pan by Tim Parker MVACS Processing flow diagram by David A. (Click image to see the entire diagram) Mars Polar Lander Demo Page Prototype DemonstrationsThe links and images which follow are "story-board" mockups of proposed web pages, tools, and environments. The Beginning of the Universe and the Limit of Knowledge “Despite its name, the big bang theory is not really a theory of a bang at all. It is really only a theory of the aftermath of a bang.” -Alan Guth So you finally understand it. The Big Bang tells us that the Universe was hotter, denser, and expanding at a faster rate in the past. Image credit: original source unknown. The farther back we go, the closer together everything was, the higher in temperature (and shorter in wavelength) all the radiation was, and — of course — the younger the Universe was. Image credit: Ned Wright (possibly Will Kinney, too), via At some point, it was hot enough that neutral atoms couldn’t even form; as soon as an electron would find an atomic nucleus, a high-enough-energy photon would come along and ionize the atom’s constituents. Image credit: Lawrence Berkeley National Laboratory. Image credit: Ned Wright. Inflation is a period of time where the Universe was expanding exponentially. Image credit: Cosmic Inflation by Don Dixon.

Helioseismology Helioseismology The science studying wave oscillations in the Sun is called helioseismology. One can view the physical processes involved, in the same way that seismologists learn about the Earth's interior by monitoring waves caused by earthquakes. Temperature, composition, and motions deep in the Sun influence the oscillation periods and yield insights into conditions in the solar interior. Waves The primary physics in both seismology and helioseismology are wave motions that are excited in the body's (Earth or Sun) interior and that propagate through a medium. However, there are many differences in number and type of waves for both terrestrial and solar environments. Time Machines and Event Horizons » Undivided Looking I've written a pop-article about Time Machines and Event Horizons, which has appeared on the Scientific American blog Critical Opalescence. George Musser, my host, is an editor at Scientific American, and kindly gave me this opportunity to talk about some of my ideas in my article, The Generalized Second Law implies a Quantum Singularity Theorem. If you have any questions about the physics in the article, please feel free to leave comments on this post here. I am a postdoctoral researcher studying quantum gravity and black hole thermodynamics at the Institute for Advanced Study in Princeton.

SETI Institute 125 Great Science Videos: From Astronomy to Physics & Psychology Astronomy & Space Travel A Brief, Wondrous Tour of Earth (From Outer Space) - Video - Recorded from August to October, 2011 at the International Space Station, this HD footage offers a brilliant tour of our planet and stunning views of the aurora borealis.A Universe from Nothing - Video - In 53 minutes, theoretical physicist Lawrence Krauss answers some big enchilada questions, including how the universe came from nothing.A Year of the Moon in 2.5 Minutes - Video - The Lunar Reconnaissance Orbiter has been orbiting the moon for over a year. The footage gets compressed into 2 slick minutes.A Day on Earth (as Seen From Space) - Video - Astronaut Don Pettit trained his camera on planet Earth, took a photo once every 15 seconds, and then created a brilliant time-lapse film.Atlantis's Final Landing at Kennedy Space Center - Video - After more than 30 years, the space shuttle era comes to a close. Video runs 30 minutes. Physics Biology & Chemistry Environment, Geology and & Ecology

How To Identify That Light In The Sky? What is that light in the sky? Perhaps one of humanity’s more common questions, an answer may result from a few quick observations. For example — is it moving or blinking? If so, and if you live near a city,the answer is typically an airplane, since planes are so numerous and so few stars and satellites are bright enough to be seen over the din of artificial city lights. If not, and if you live far from a city, that bright light is likely a planet such as Venus or Mars – the former of which is constrained to appear near the horizon just before dawn or after dusk.Sometimes the low apparent motion of a distant airplane near the horizon makes it hard to tell from a bright planet, but even this can usually be discerned by the plane’s motion over a few minutes. SEE ALSO: Night on Earth: biggest cities without power Still unsure?