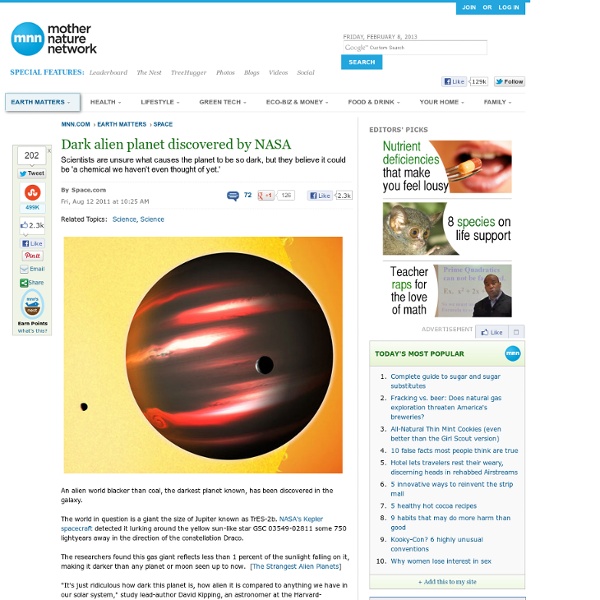 An alien world blacker than coal, the darkest planet known, has been discovered in the galaxy. The world in question is a giant the size of Jupiter known as TrES-2b. NASA's Kepler spacecraft detected it lurking around the yellow sun-like star GSC 03549-02811 some 750 lightyears away in the direction of the constellation Draco. The researchers found this gas giant reflects less than 1 percent of the sunlight falling on it, making it darker than any planet or moon seen up to now. [The Strangest Alien Planets] "It's just ridiculous how dark this planet is, how alien it is compared to anything we have in our solar system," study lead-author David Kipping, an astronomer at the Harvard-Smithsonian Center for Astrophysics, told SPACE.com. "However, it's not completely pitch black," co-author David Spiegel of Princeton University said in a statement. "It's a mystery as to what's causing it to be so dark," Kipping said. This article was reprinted with permission from SPACE.com.

Earth-size planet found: Lightest exoplanet yet orbits Sun-like star Alpha Centauri B Newly found world orbits Alpha Centauri B, 4.3 light years from our SunIt is the lightest exoplanet yet found orbiting a Sun-like starIt is thought to be too hot for life, and there is likely no water presentBut presence suggests there may be other planets within the same system By Daily Mail Reporter Published: 08:18 GMT, 17 October 2012 | Updated: 12:37 GMT, 17 October 2012 An Earth-sized planet has been found orbiting a star in Alpha Centauri, our nearest neighbouring solar system. The mystery world circling Alpha Centauri B is thought to be much too hot to support life, with surface temperatures of around 1,500C. But astronomers say it is likely to be part of a more extensive solar system containing other planets, one or more of which might be habitable.

The History of the Universe in 200 Words or Less Quantum fluctuation. Inflation. Expansion. Weird World of Quantum Physics May Govern Life NEW YORK — The bizarre rules of quantum physics are often thought to be restricted to the microworld, but scientists now suspect they may play an important role in the biology of life. Evidence is growing for the involvement of quantum mechanics in a wide range of biological processes, including photosynthesis, bird migration, the sense of smell, and possibly even the origin of life. These and other mysteries were the topic of a panel lecture June 1 held here at the Kaye Playhouse at Hunter College, part of the fifth annual World Science Festival. Quantum mechanics refers to the strange set of rules that governs the behavior of subatomic particles, which can travel through walls, behave like waves and stay connected over vast distances.

Astronomer discovers 18 giant alien planets the size of Jupiter orbiting massive dying stars outside our own solar system By Michael Zennie Updated: 00:08 GMT, 4 December 2011 A patient astronomer has discovered 18 massive new alien planets orbiting dying giant stars outside our solar system. It is a finding that could help scientists better understand the origins of our own sun and the planets that orbit it. This is the second-largest batch of such planets ever found -- and increases the number of known alien bodies orbiting massive stars by 50 percent. California Institute of Technology Professor John Johnson and his team of astronomers spent nearly 10 years staring at 300 solar systems, searching for a tell-tale wobble caused by the gravitational pull from planets. Gas giants: All 18 planets found by Professor John Johnson and his team are roughly the size of Jupiter

The Unsolved Mystery of Saturn's Hexagon -4 Times the Size of Earth "Cassini is indebted to Voyager for its many fascinating discoveries and for pavingthe way for Cassini," says Linda Spilker, Cassini project scientist at JPL, who started her career working on Voyager from 1977 to 1989. "On Cassini, we still compare our data to Voyager's and proudly build on Voyager's heritage." But the Voyager Mission left a few mysteries that Cassini has not yet solved. One of the most perplexing mysteries is Saturn's hexagpn. NASA scientists first spotted a hexagonal weather pattern when they stitched together Voyager images of Saturn's north pole.

New comet likely to impress when it passes closest to Earth in December By Alan Pickup, The GuardianSunday, October 14, 2012 20:16 EDT A comet found recently beyond the orbit of Jupiter could well become spectacular late next year and may be a sibling of one of the most celebrated comets of all time. What is formally known as Comet C/2012 S1 (ISON) was not at first recognised as a comet when it was spotted as a 19th magnitude object using a small Russian telescope of the International Scientific Optical Network on 21 September. Incredible Space Pics from ISS by NASA astronaut Wheelock Go Discovery! It was October 23, 2007 at 11:40am EST when I had my first ride to space on Discovery. She’s beautiful… just sad that this will be her last voyage. Looking forward to climbing aboard the flight deck when Discovery arrives at the Space Station in November. (9-23-2010). Incredible Photos from Space: Larry Tanner, NASA.

Splitting the Unsplittable: Physicists split an atom using quantum mechanics precision Researchers from the University of Bonn have just shown how a single atom can be split into its two halves, pulled apart and put back together again. While the word "atom" literally means "indivisible," the laws of quantum mechanics allow dividing atoms -- similarly to light rays -- and reuniting them. The researchers want to build quantum mechanics bridges by letting the atom touch adjacent atoms while it is being pulled apart so that it works like a bridge span between two pillars. The results have just been published in the journal Proceedings of the National Academy of Sciences.

Strongest evidence yet indicates Enceladus hiding saltwater ocean This image shows icy spray spewing from Saturn's moon, Enceladus. Credit: NASA/JPL/Space Science Institute The new discovery was made during the Cassini-Huygens mission to Saturn , a collaboration of NASA, the European Space Agency and the Italian Space Agency. Launched in 1997, the mission spacecraft arrived at the Saturn system in 2004 and has been touring the giant ringed planet and its vast moon system ever since. The plumes shooting water vapor and tiny grains of ice into space were originally discovered emanating from Enceladus -- one of 19 known moons of Saturn -- by the Cassini spacecraft in 2005.

11 cheap gifts guaranteed to impress science geeks Science comes up with a lot of awesome stuff, and you don't need a Ph.D, a secret lab, or government funding to get your hands on some of the coolest discoveries. We've got a list of 11 mostly affordable gifts that are guaranteed to blow your mind, whether or not you're a science geek. Click on any image to see it enlarged. StereoMan » Hubble photos 4/26/2010 M64 “Black Eye” Galaxy click the picture 17 million light-years from Earth lies Messier 64, otherwise known as the Black Eye Galaxy, or Sleeping Beauty. Discovered in 1779 by Edward Pigott, astronomers thought for centuries that it was a fairly ordinary spiral galaxy.

Chinese physicists achieve quantum teleportation over 60 miles Hold onto your seats: Chinese physicists are reporting that they’ve successfully teleported photonic qubits (quantum bits) over a distance of 97 kilometers (60mi). This means that quantum data has been transmitted from one point to another, without passing through the intervening space. Now, before you get too excited, we’re still a long, long way off Willy-Wonka-Mike-Teevee-style teleportation.

Japan Calls it Quits on Infrared Space Telescope Japan announced last week that its Akari infrared space telescope was switched off after five years of scanning the sky in search of star-forming dust clouds, ancient galaxies in the distant universe, and asteroids within the solar system. The Akari mission succumbed to trouble in its power generation system, which first appeared in May and ended the satellite's scientific observations in June. The observatory stopped receiving electricity on the night side of its orbit around Earth, an indication its batteries were not charging sufficiently.