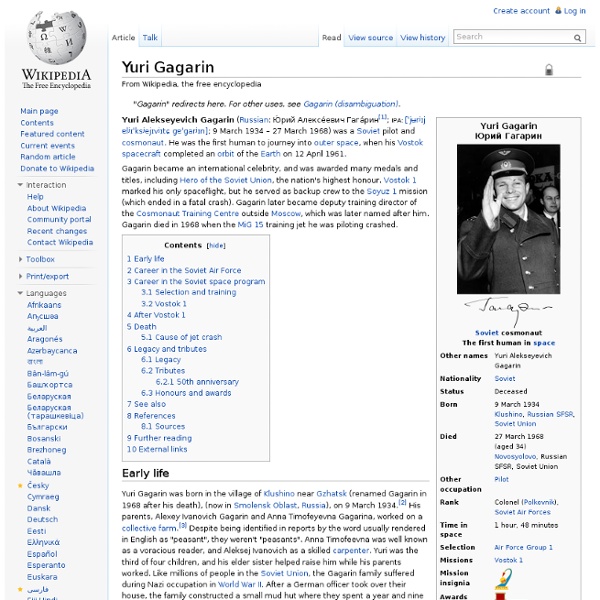 Gagarin became an international celebrity, and was awarded many medals and titles, including Hero of the Soviet Union, the nation's highest honour. Vostok 1 marked his only spaceflight, but he served as backup crew to the Soyuz 1 mission (which ended in a fatal crash). Gagarin later became deputy training director of the Cosmonaut Training Centre outside Moscow, which was later named after him. Gagarin died in 1968 when the MiG-15 training jet he was piloting crashed. Early life and education Yuri Gagarin was born in the village of Klushino, near Gzhatsk (renamed Gagarin in 1968 after his death), on 9 March 1934.[1] His parents worked on a collective farm:[2] Alexey Ivanovich Gagarin as a carpenter and bricklayer, and Anna Timofeyevna Gagarina as a milkmaid. Like millions of people in the Soviet Union, the Gagarin family suffered during Nazi occupation in World War II. Career in the Soviet Air Force Career in the Soviet space program Selection and training Vostok 1 After Vostok 1 Death Legacy

M. C. Escher Maurits Cornelis Escher (/ˈɛʃər/, Dutch: [ˈmʌurɪts kɔrˈneːlɪs ˈɛʃər] ( );[1] 17 June 1898 – 27 March 1972), usually referred to as M. C. Escher, was a Dutch graphic artist. He is known for his often mathematically inspired woodcuts, lithographs, and mezzotints. Early life[edit] Maurits Cornelis,[2] was born in Leeuwarden, Friesland, in a house that forms part of the Princessehof Ceramics Museum today. He was a sickly child, and was placed in a special school at the age of seven and failed the second grade.[3] Although he excelled at drawing, his grades were generally poor. Later life[edit] In 1922, an important year of his life, Escher traveled through Italy (Florence, San Gimignano, Volterra, Siena, Ravello) and Spain (Madrid, Toledo, Granada). In Italy, Escher met Jetta Umiker, whom he married in 1924. In 1935, the political climate in Italy (under Mussolini) became unacceptable to Escher. Works[edit] In his early years, Escher sketched landscapes and nature. Circle Limit III, 1959

3C 321 3C 321 is a system of two galaxies rotating around each other. They are notable for showing the first observed galaxy smiting another galaxy with a blast of energy, which is theorized to be from a supermassive black hole at the center of the former galaxy. The larger galaxy, dubbed the "Death Star Galaxy" by NASA astronomers, has an energetic jet directed towards its companion. The discovery was announced by NASA Dec 18 2007. Observation of the enormous jet was possible due to the combined efforts of both space and ground-based telescopes. Tools included NASA's Chandra X-ray Observatory, the Hubble Space Telescope, Spitzer Space Telescope, the Very Large Array-VLA, and the Multi-Element Radio Linked Interferometer Network. References[edit]

Joseph Ducreux Joseph, Baron Ducreux (June 26, 1735 – July 24, 1802) was a French portrait painter, pastelist, miniaturist, and engraver, who was a successful portraitist at the court of Louis XVI of France, and resumed his career after the French Revolution. His less formal portraits show an interest in expanding the range of facial expressions beyond those of official portraiture. Life and career[edit] Born in Nancy, France, Ducreux may have trained with his father, who was also a painter. In 1769, Ducreux was sent to Vienna in order to paint a miniature of Marie-Antoinette (shown left) before she left the city in 1770 and married Louis XVI of France. At the outbreak of the French Revolution, Ducreux traveled to London. Ducreux had several children. Work[edit] Ducreux specialized in portrait painting, and his early portraits were done in pastel, and include those done of the connoisseurs Pierre-Jean Mariette, the Comte de Caylus and Ange-Laurent de la Live de July. Internet meme[edit] Gallery[edit]

Gomez's Hamburger Gomez's Hamburger is believed to be a young star surrounded by a protoplanetary disk.[1] It was initially identified as a planetary nebula (i.e. an old dying star), and its distance therefore wrongly estimated to be approximately 6500 light-years away from planet Earth.[2] However, recent results suggest that this object is a young star surrounded by a protoplanetary disk whose distance is only around 900 light-years away.[1][3] It was discovered in 1985 on sky photographs obtained by Arturo Gomez, support technical staff at the Cerro Tololo Inter-American Observatory near Vicuña, Chile.[4] The photos suggested that there was a dark band across the object, but its exact structure was difficult to determine because of the atmospheric turbulence that hampers all images taken from the ground. The star itself has a surface temperature of approximately 10,000 °C (18,000 °F). The "hamburger buns" are light reflecting off dust, and the "petit paté" is the dark band of dust in the middle.

Luigi Russolo Biography[edit] Luigi Russolo was perhaps the first noise artist.[3][4] His 1913 manifesto, L'Arte dei Rumori, translated as The Art of Noises, stated that the industrial revolution had given modern men a greater capacity to appreciate more complex sounds. Russolo found traditional melodic music confining and envisioned noise music as its future replacement. He designed and constructed a number of noise-generating devices called Intonarumori and assembled a noise orchestra to perform with them. A performance of his Gran Concerto Futuristico (1917) was met with strong disapproval and violence from the audience, as Russolo himself had predicted. At first the art of music sought purity, limpidity and sweetness of sound. Russolo and Marinetti gave the first concert of Futurist music, complete with intonarumori, in April 1914 (causing a riot).[9] The program comprised four "networks of noises" with the following titles: Intonarumori reconstruction[edit] See also[edit] Further reading[edit] [edit]

Moon landing Clickable imagemap of the locations of all successful soft landings on the Moon to date. Dates are landing dates in UTC. Still frame from a video transmission, taken moments before Neil Armstrong became the first human to step onto the surface of the Moon, at 02:56 UTC on 21 July 1969. Luna 2, the first object made on Earth to reach the surface of the Moon. A moon landing is the arrival of a spacecraft on the surface of the Moon. The United States' Apollo 11 was the first manned mission to land on the Moon, on 20 July 1969.[4] There have been six manned U.S. landings (between 1969 and 1972) and numerous unmanned landings, with no soft landings happening from 1976 until 14 December 2013. Unmanned landings[edit] The Soviet Union performed the first hard (unpowered) Moon landing in 1959 with the Luna 2 spacecraft, a feat the U.S. duplicated in 1962 with Ranger 4. The Soviet Union achieved the first unmanned lunar soil sample return with the Luna 16 probe on 24 September 1970.

Raymond Robinson (Green Man) Raymond "Ray" Robinson (October 29, 1910 – June 11, 1985) was a severely disfigured man whose years of nighttime walks made him into a figure of urban legend in western Pennsylvania. Robinson was so badly injured in a childhood electrical accident that he could not go out in public without fear of creating a panic, so he went for long walks at night. Local residents, who would drive along his road in hopes of meeting him, called him The Green Man or Charlie No-Face. They passed on tales about him to their children and grandchildren, and people raised on these tales are sometimes surprised to discover that he was a real person who was liked by his family and neighbors.[1] Robinson was eight years old when he was injured by an electrical line on the Morado Bridge, outside of Beaver Falls, while attempting to view a bird's nest. Robinson became a local myth in the Pittsburgh area, and his real story was obscured by urban legend.

Lunokhod programme The Lunokhod mission diagram. Soviet moonrover Development[edit] Parabolic dish TNA-400 and abandoned NIP-10 Lunokhod's original primary mission was the survey of sites for later manned landings and lunar bases. At least four complete vehicles were constructed, with the serial numbers 201, 203, 204 and 205. Lunokhod 201[edit] After years of secret engineering development and training, the first Lunokhod (vehicle 8ЕЛ№201) was launched on February 19, 1969. Lunokhod 1[edit] Lunokhod 1 robot vehicle After the destruction of the original Lunokhod, Soviet engineers began work immediately on another lunar vehicle. Luna 17 was launched on November 10, 1970 at 14:44:01 UTC. The spacecraft soft-landed on the Moon in the Sea of Rains on November 17, 1970 at 03:47 UTC. To be able to work in vacuum a special fluoride based lubricant was used for the mechanical parts and the electric motors (one in each wheel hub) were enclosed in pressurised containers.[6][7] Rover description[edit] Payload[edit]

Genie (feral child) Genie (born 1957) is the pseudonym of a feral child who was the victim of extraordinarily severe abuse, neglect and social isolation. Her circumstances are recorded prominently in the annals of abnormal child psychology.[2] Born in Arcadia, California, United States, Genie's father kept her locked alone in a room from the age of 20 months to 13 years, 7 months, almost always strapped to a child's toilet or bound in a crib with her arms and legs completely immobilized. During this time she was never exposed to any significant amount of speech, and as a result she did not acquire a first language during childhood. Her abuse came to the attention of Los Angeles child welfare authorities on November 4, 1970.[3][4] In the first several years after Genie's life and circumstances came to light, psychologists, linguists and other scientists focused a great deal of attention on Genie's case, seeing in her near-total isolation an opportunity to study many aspects of human development.

Luna 2 Luna 2 site is near the right of the image, close to the Apollo 15 landing site Launch was scheduled for September 9, but the Blok I core stage was shut down after it failed to reach full thrust at ignition. The booster was removed from the pad and replaced by a different vehicle, delaying the flight by three days. Luna 2, like Luna 1, took a direct path to the Moon with a journey time of around 36 hours. This was dictated by the fact that the Earth-Moon gravitational system forced it to follow a curved trajectory, and launch had to occur from the side of the Earth opposite the Moon. Luna 2 was similar in design to Luna 1, a spherical spacecraft with protruding antennas and instrument parts. Van Allen Radiation Belt[edit] Luna 2 showed time variations in the electron flux and energy spectrum in the Van Allen radiation belt. USSR pennants[edit] The copy of the Soviet pennant sent on the Luna 2 probe to the moon, at the Kansas Cosmosphere See also[edit] References[edit] External links[edit]

Victor of Aveyron Victor of Aveyron (c. 1788 – 1828) was a French feral child who was found in 1800 after apparently spending the majority of his childhood alone in the woods. Upon his discovery, his case was taken up by a young physician, Jean Marc Gaspard Itard, who worked with the boy for five years and gave him his name, Victor. Itard was interested in determining what Victor could learn. He devised procedures to teach the boy words and recorded his progress. Early life[edit] Victor is estimated to have been born around 1788. Study[edit] Victor of Aveyron Shortly after Victor was found, a local abbot and biology professor, Pierre Joseph Bonnaterre, examined him. Influence of the Enlightenment[edit] The Enlightenment caused many thinkers, including naturalists and philosophers, to believe human nature was a subject that needed to be redefined and looked at from a completely different angle. Influence of colonialism[edit] Education[edit] Jean Marc Gaspard Itard[edit] Language[edit] Dramatization[edit] [edit]