Bandzr - jam band generator. Thoughts about music and video games. Music Composition For Dummies Cheat Sheet. Cheat Sheet Music composition is a detailed activity that requires knowledge of a whole range of music basics: how to make use of the Circle of Fifths; knowing which major and minor chord progressions are most pleasing to the ear; and determining the Greek scale that's best suited to your piece. 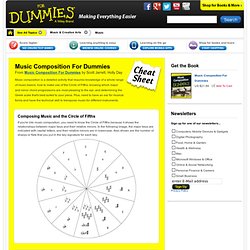 Plus, need to have an ear for musical forms and have the technical skill to transpose music for different instruments. Composing Music and the Circle of Fifths If you're into music composition, you need to know the Circle of Fifths because it shows the relationships between major keys and their relative minors. In the following image, the major keys are indicated with capital letters, and their relative minors are in lowercase. Musical Forms for Music Composition In composing music, you follow certain rhythm forms.

Seven Greek Modes for Music Composition If you're composing music, you generally use one of the seven main types of musical scales, or modes, generally referred to as Greek scales. Music Theory For Dummies Cheat Sheet. Cheat Sheet If you're trying to learn how to play music, read music, or brush up on improvising and performing with other musicians, music theory is important. 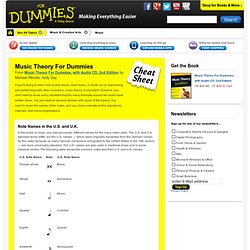 However, you don't need to know every last tidbit that the many theorists around the world have written down. You just need to become familiar with some of the basics. You need to know the names of the notes, and you must understand time signatures, intervals, and chord progressions. Note Names in the U.S. and U.K. 12. Composing a Melody: General Tips. Saturday, 14 August 2010 Grade 5 Online Course Hits: 90500 Composing Melodies In question 6 of the Grade 5 theory paper, you have to write a short melody. 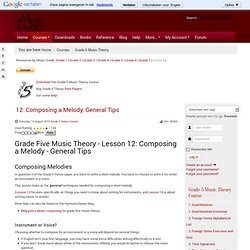 You have to choose to write it for either an instrument or a voice. This lesson looks at the general techniques needed for composing a short melody. Lesson: Melodic Construction. Another Look at Melodic Construction in Improvisation What do we play? 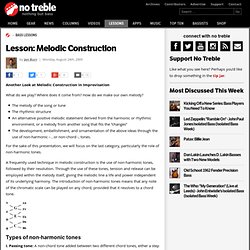 Where does it come from? How do we make our own melody? The melody of the song or tuneThe rhythmic structureAn alternative positive melodic statement derived from the harmonic or rhythmic environment, or a melody from another song that fits the “changes”The development, embellishment, and ornamentation of the above ideas through the use of non-harmonic – , or non-chord -, tones.

For the sake of this presentation, we will focus on the last category, particularly the role of non-harmonic tones. A frequently used technique in melodic construction is the use of non-harmonic tones, followed by their resolution. I. II. III. IV. V. Additional notes can be inserted chromatically either before or after the skip in a changing tone series: Or, the originating tone can be left out: VI. Learn these most common chord progression types and never get stuck again… When it comes to playing songs, there are tons of progressions to learn. 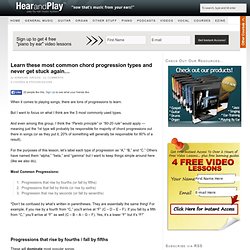 But I want to focus on what I think are the 3 most commonly used types. And even among this group, I think the “Pareto principle” or “80-20 rule” would apply — meaning just the 1st type will probably be responsible for majority of chord progressions out there in songs (or as they put it, 20% of something will generally be responsible for 80% of a result). Www.cheat-sheets.org/saved-copy/musictheory.pdf. Chord Progression Generator. Bfxr. Make sound effects for your games.

FAQ : The Guide To Chord Theory - understanding chord construction/naming. Adding Flavor to Chords – Major and Minor 7ths – Basix. Today we are going to cover how to add some flavor to your chords and compositions using 7ths in both major and minor. 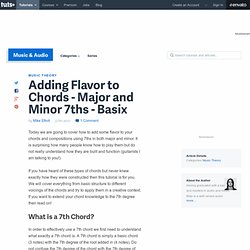 It is surprising how many people know how to play them but do not really understand how they are built and function (guitarists I am talking to you!). If you have heard of these types of chords but never knew exactly how they were constructed then this tutorial is for you. FindSounds - Search the Web for Sounds. Music Theory Cheat Sheet: Scales, Keys, Chords. The title of this post might be a little grandiose, but it’s (somewhat) true. 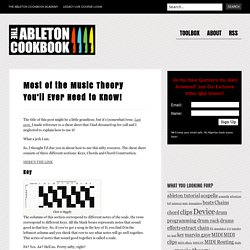 Last post, I made reference to a cheat sheet that I had dreamed up for yall and I neglected to explain how to use it! What a jerk I am. So, I thought I’d clue you in about how to use this nifty resource. The cheat sheet consists of three different sections: Keys, Chords and Chord Construction. Key Click to Biggify The columns of this section correspond to different notes of the scale, the rows correspond to different keys.

F#? Of course, you can do the opposite, as I’ve done in the last post, and figure out what key a melodic phrase is in by finding what key contains those notes. Example: I hum a simple melody into my iPhone while in the car, let’s say A, G and F#. Common Chord Progressions—The Complete Idiot’s Quick Guide. Writing chord progressions can be one of the trickier things about writing a music composition. 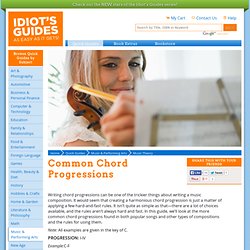 It would seem that creating a harmonious chord progression is just a matter of applying a few hard-and-fast rules. It isn’t quite as simple as that—there are a lot of choices available, and the rules aren’t always hard and fast. In this guide, we’ll look at the more common chord progressions found in both popular songs and other types of compositions and the rules for using them. Note: All examples are given in the key of C.

Example:C-F Comments: It doesn’t get much simpler than this, just the tonic (I) and subdominant (IV) cycled over and over. Here's a little cheat sheet to writing a song.