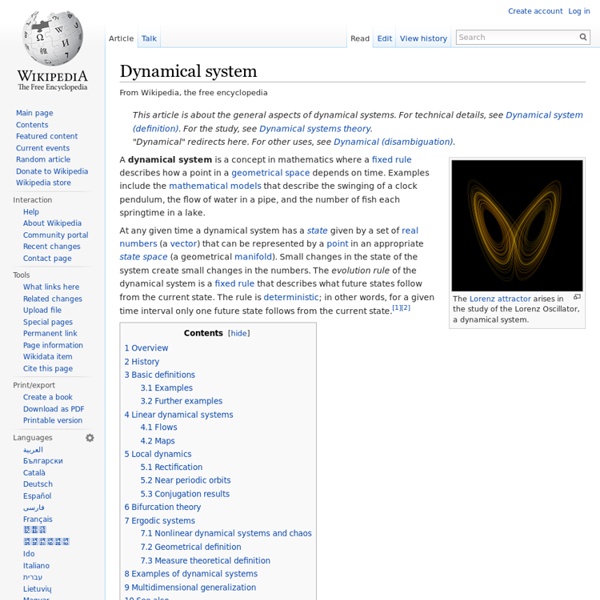 The Lorenz attractor arises in the study of the Lorenz Oscillator, a dynamical system. Overview[edit] Before the advent of computers, finding an orbit required sophisticated mathematical techniques and could be accomplished only for a small class of dynamical systems. Numerical methods implemented on electronic computing machines have simplified the task of determining the orbits of a dynamical system. For simple dynamical systems, knowing the trajectory is often sufficient, but most dynamical systems are too complicated to be understood in terms of individual trajectories. The systems studied may only be known approximately—the parameters of the system may not be known precisely or terms may be missing from the equations. History[edit] Many people regard Henri Poincaré as the founder of dynamical systems.[3] Poincaré published two now classical monographs, "New Methods of Celestial Mechanics" (1892–1899) and "Lectures on Celestial Mechanics" (1905–1910). Basic definitions[edit] Flows[edit]

THE GENERAL SYSTEM? REVIEWED by Charles Francois, Editor, International Encyclopedia of Cybernetics and Systemics By Thomas Mandel "A human being is part of the Whole...He experiences himself, his thoughts and feelings, as something separated from the rest...a kind of optical delusion of his consciousness. "My friend, all theory is gray, and the Golden tree of life is green." It is time we, especially we in the systems movement, stop fighting amongst ourselves. "In contrast to the mechanistic Cartesian view of the world, the world-view emerging from modern physics can be characterized by words like organic, holistic, and ecological. The subject of a General Principle, a.k.a. But some others go on to create an entire new general system of their own, which they attain by particularizing the general definition somewhat, in effect creating a "sister" GST. The former derivative process results in the same thing being said but in different ways. The idea of a General System is not necessarily new. By Tom Mandel

Feedback "...'feedback' exists between two parts when each affects the other."[1](p53, §4/11) A feedback loop where all outputs of a process are available as causal inputs to that process "Simple causal reasoning about a feedback system is difficult because the first system influences the second and second system influences the first, leading to a circular argument. In this context, the term "feedback" has also been used as an abbreviation for: Feedback signal – the conveyance of information fed back from an output, or measurement, to an input, or effector, that affects the system.Feedback loop – the closed path made up of the system itself and the path that transmits the feedback about the system from its origin (for example, a sensor) to its destination (for example, an actuator).Negative feedback – the case where the fed-back information acts to control or regulate a system by opposing changes in the output or measurement. History[edit] Types[edit] Positive and negative feedback[edit] Biology[edit]

Random dynamical system evolving according to a succession of maps randomly chosen according to the distribution Q.[1] Motivation: solutions to a stochastic differential equation[edit] Let be a -dimensional vector field, and let . to the stochastic differential equation exists for all positive time and some (small) interval of negative time dependent upon , where denotes a -dimensional Wiener process (Brownian motion). In this context, the Wiener process is the coordinate process. Now define a flow map or (solution operator) by (whenever the right hand side is well-defined). (or, more precisely, the pair ) is a (local, left-sided) random dynamical system. Formal definition[edit] Formally, a random dynamical system consists of a base flow, the "noise", and a cocycle dynamical system on the "physical" phase space. be a probability space, the noise space. as follows: for each "time" , let be a measure-preserving measurable function: for all and Suppose also that That is, . ; in these cases, the maps is ergodic. Now let , the base flow