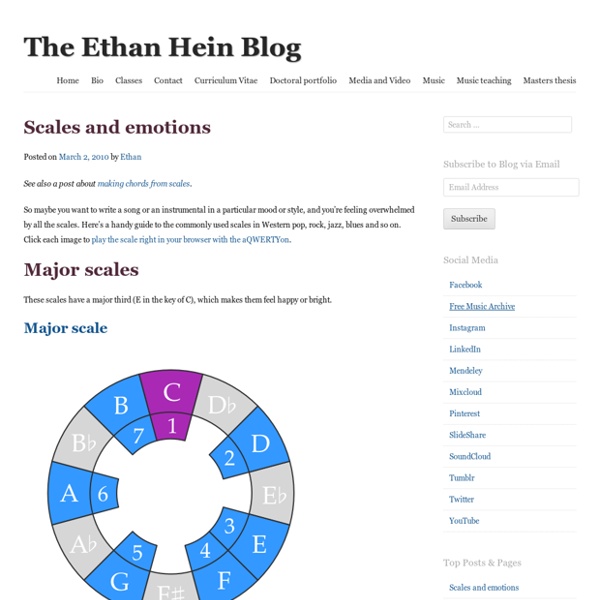 See also a post about making chords from scales. So maybe you want to write a song or an instrumental in a particular mood or style, and you’re feeling overwhelmed by all the scales. Here’s a handy guide to the commonly used scales in Western pop, rock, jazz, blues and so on. Click each image to play the scale right in your browser with the aQWERTYon. These scales have a major third (E in the key of C), which makes them feel happy or bright. Major scale Happy; can be majestic or sentimental when slow. Mixolydian mode Bluesy, rock; can also be exotic/modal. Lydian mode Ethereal, dreamy, futuristic. Lydian dominant mode Also known as the overtone scale or acoustic scale, because it is close to the first seven pitches in the natural overtone series. Phrygian dominant mode Exotic, Middle Eastern, Jewish. Harmonic major scale Majestic, mysterious. These scales have a flat third (E-flat in the key of C), which gives them a darker and more tragic feel. Natural minor scale (Aeolian mode) Dorian mode

Speak from day 1 You don’t have to be “gifted” to learn a new language, but you do have to be smart about how you learn it. Hi! When you’ve watched the video above and are ready to join the thousands of other language hackers who are using the Fluent in 3 Months PREMIUM package as an unconventional approach to learn languages quickly, click the button below. Learning and Loving Music Theory Kelvin, You actually caught a mistake on the roman numerals! Thanks, I’ll have to fix that. The first and last chords of the progression are not 7th chords. Somehow I inadvertently typed “I7″ on the first chord of all the major keys. (Notice that I didn’t do that for the minor keys.) Jazz Progressions Jazz Progressions are simply common chord progressions in jazz music. One of the most common progressions is the ii-V-I progression. The ii-V-I sounds at its best when you use seventh chords and their expanded voicings. As you already know from past lessons, the ii chord is a minor chord, the V chord is a dominant chord, and the I chord is a major chord.

Forums : Off-topic Discussion : Music Theory- The basics updated V7 Introduction Hello there, you may have seen me around The Escapist and most know me as The Rockerfly, I am a musician. I have been playing music for about 10 years and have been writing for 3 years. I have an A level in music, grade 7 guitar, grade 5 in tuba, play the drums part time and sing for a group as well. The Harmonic Language of Jazz Standards Have you ever met a player who can seemingly play any song in any key, coming up with different chord substitutions on every chorus? If you have been playing for a while but thought this skill was something magical and beyond you, then this book is for you. What allows players to do these things is the ability to recognize and understand common chord progressions and to reproduce them by ear as easily as one can play melodies by ear.

Useful Websites Here is a list of websites we have featured in the past that might come in handy. Remember to set FuckingHomepage.com as your start page if you haven’t already. Educational/Learning favoriteandforget.com – Useful and educational links updated daily. Set it as your homepage and forget about it.khanacademy.org - video lectures on just about any subjectted.com - lectures by smart peopleinternetisuseful.com - for every educational website or useful web app out thereacademicearth.org - classroom lecturesfreerice.com - expand your vocabulary while feeding the hungrylizardpoint.com - a collection of geography quizzesmathrun.net - timed math quizzesclassicshorts.com - the best short storieserowid.org - learn about drugsqwikia.com - turn a Wikipedia article into a videounplugthetv.com - a collection of intellectually stimulating videosfactsie.com - a place to learn amazing and unusual historical and scientific facts Learn Skills

How to construct chords - Piano Clues: Free tips and lessons for playing piano, organ and electronic keyboard You don’t need a “1000 Chords Dictionary” to be able to read and play chords. You can learn how to form chords on your own, because chords are built using simple formulas. A chord is three or more notes played at the same time. It’s as simple as that. Key Chords Key Chords app generates guitar chord progressions automatically. Use it free online, or get the app for Mac, Windows or iOS (iPad) - Click on a chord to preview how it sounds. - Drag and drop to arrange the chord progression - Tweak the settings to control the playback speed Or role the dice and Key Chords will automatically generate a nice sounding progression.

The 9 Most Underrated Funny Songs (According to Weird Al) Weird Al Yankovic has been parodying pop music since back in the days when people still paid for it. When we found out he was willing to do something for Cracked.com in line with his recently released double album, we asked him if he might want to write something about underrated funny songs or even better tell us the stories behind songs he wanted to parody, but couldn't. To our surprise, he did both. BARNES AND BARNES - Boogie Woogie Amputee

Guitar Chord Charts Home Jazz Guitar Chords What makes a guitar chord a jazz guitar chord? Most people define jazz guitar chords as seventh chords with or without tensions as opposed to more basic chords like triads. 8 Great How-To Web Sites The "wisdom of the crowd" model works very well for how-to and advice sites like Yahoo Answers and Instructables. The content at these sites is created and contributed largely by the communities of people that frequent the sites. At some of the sites you can ask a question, and then read what informed members of the community have to say about it. Yahoo Answers: One of the best examples of community participation on the Net.

Best Quotes of All Time It’s been three years since we shared our original list of some of the best quotes of all time, and we felt it was a good time for an update. We’ve added another 25 quotes for you. But these aren’t just any quotes. These are quotes designed to inspire.