Off the Grid, Photos of People Living Outside Mainstream Society in The USA 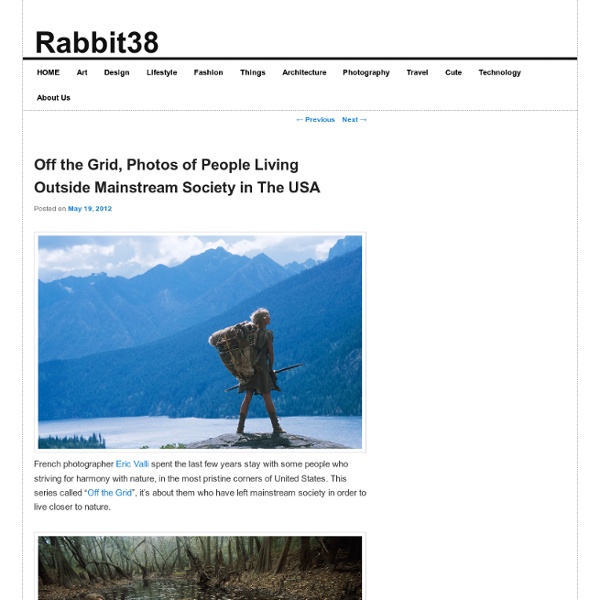 Renewed Anti-Government Protests in Turkey One day last summer, as anti-government protests roiled Istanbul, a 14-year-old boy named Berkin Elvan was on his way to buy bread when he was struck in the head by a tear gas canister. After spending months in a coma, Berkin died this week -- reigniting anger at Prime Minister Recep Tayyip Erdogan and sending thousands back into the streets in dozens of cities. Riot police were quick to react, disrupting demonstrations with water cannons, clubs, and more tear gas. At least two were killed, dozens more injured. Opposition groups are calling for further protests and are still seeking the ouster of Prime Minister Erdogan. [38 photos] Use j/k keys or ←/→ to navigate Choose: A young woman, held after she was wounded during clashes between riot police and protestors after the funeral of Berkin Elvan in Istanbul on March 12, 2014. People hold images of Berkin Elvan as they gather In Ankara, Turkey, on March 11, 2014, to protest his death.

Udi Tirosh's Five Favorite DIY Photography Projects Udi Tirosh's Five Favorite DIY Photography Projects Interview edited by Dan Havlik As part of PDN's DIY issue, we interviewed Udi Tirosh who runs the popular DIY Photography blog. You can also read the stories behind the ingenious DIY cameras created by three photographer/inventors here. 1) Create Your Own Bokeh The bokeh effect project is by far my favorite venture on the blog. There are more resources on the bokeh effect here. I was also able to develop an actual photo product out of this project entitled the Bokeh Masters kit. 2) DIY Light Painting Light painting is a technique that converts light sources into brushes. Here is a project that shows how to give this car a Tron-like look using sparklers to paint with the light. Click here and here for more resources on do-it-yourself light painting. 3) The $10 Foam Core Soft Box While softboxes are not the priciest items on the planet, this tutorial shows how you can build a small softbox from cardboard or foamcore at a frugal price.

Photographer Martin Klimas Paints Like Pollock With Sound How do you paint with sound? It’s a good question and the answer comes from German photographer Martin Klimas. He starts by putting different colored paint on top of a speaker over some translucent material, then cranks up the volume. The vibrations of the speaker shoot the paint into the air creating beautiful patterns and sculptural forms, and Klimas snaps them with his camera while in flight. We’re used to seeing audiovisual collaborations, like those explored by Quayola and Jamie XX, but they’re usually animated using computer software, whereas this is a much more analogue affair. Miles Davis – “Pharaoh’s Dance” Steve Reich and Musicians – “Music for 18 Musicians” Kraftwerk – “Transistor” Steve Reich and Musicians – “Drumming” Miles Davis – “Bitches Brew” Paul Hindemith – “Ludus Tonalis” [via Kottke] @stewart23rd

Photos of the Week: 8/30-9/5/2014 This week we have a look at the West Indian Day Parade in Brooklyn, Ecuador's still-erupting Tungurahua volcano, Iraqi forces taking the battle to ISIS, the massive Jurong Rock Caverns below Singapore, a kitesurfing world record in Spain, and an 82-foot-tall white rabbit in Taiwan, as well as many other subjects. [35 photos] Use j/k keys or ←/→ to navigate Choose: Leng Yuting, 26, poses underwater for her wedding pictures at a photo studio in Shanghai on September 3, 2014, ahead of her wedding next year. Her fiance Riyang said they had their wedding photographs taken underwater because "it's romantic and beautiful." In this aerial view, fountains of lava, up to 60 meters high, spurt from a fissure in the ground on the north side of the Bardarbunga volcano in Iceland on September 2, 2014. The alert warning for the area surrounding Iceland's Bardarbunga volcano remained at orange then, indicating that it was showing increased unrest with greater potential for an explosive eruption.