9 Principles of Japanese Art and Culture 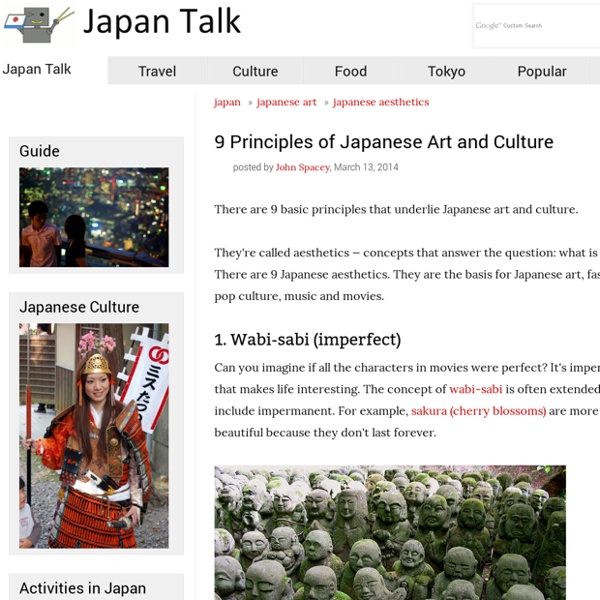 There are 9 basic principles that underlie Japanese art and culture. They're called aesthetics — concepts that answer the question: what is art? There are 9 Japanese aesthetics. They are the basis for Japanese art, fashion, pop culture, music and movies. 1. Wabi-sabi (imperfect) Can you imagine if all the characters in movies were perfect? 2. Miyabi is often translated "heartbreaker". 3. Shibui means simple, subtle or unobtrusive. 4. Iki is uniqueness. Iki is the movie character who's a bad-ass with style and grace. 5. Jo-ha-kyu is a tempo that can be translated as — start slowly, accelerate and end suddenly. Modern uses include movies, music and advertising. 6. Yugen states that life is boring when all the facts are known. Where does the smoke come from? 7.Geido (discipline and ethics) Have you ever noticed that Japanese martial arts (and traditional arts) are all about discipline? 8. Ensou is a zen concept. 9. Kawaii is cute.

Japanese women - home - 2 clicks Check out this incredible multi-home teepee structure called “Jikka” designed by Tokyo-based architect Issei Suma. It’s in a rural, mountainous region of Japan known as Shizuoka Prefecture. It was designed to house a pair of elderly ladies whose idea of ‘retirement home’ is far from traditional. They live on site with their caretakers, sharing the living space, work space and kitchen, all arranged in a square formation. In the center of the complex, there’s a spiral-shaped pool which is easily accessible for wheelchair users.

5 Japanese Words for Those Feelings You've Never Been Able to Explain On paper, Japanese looks to an Englishwoman like a spider has walked in ink and danced an eight-legged tap dance across the page. Actually Japanese writing is composed of three character sets: Kanji (Chinese characters), Hiragana and Katakana and can be written horizontally top to bottom or vertically right to left. In short, it’s impossible.

Asian Mythology In this section are descriptions of Asian Mythologies and mythological beings described in the encyclopedia.The mythologies include those mostly in the ancient Near East, from Mesopotamia to Anatolia. The populations included the Semitic successors of the Babylonians and Assyrians, Hurrites, Hitties, and the Indo-Europeans. Heike Weber Installations Utterly amazing installations by Heike Weber. She draws with permanentmarkers on acrylic floor and walls – surfaces that have reached up to 600 m2. I can’t begin to imagine how time consuming these breathtaking installations must have been.

Women in Ancient Japan: From Matriarchal Antiquity to Acquiescent Confinement The role of women in ancient Japan elicits inconsistencies due to different influences that were integrated at various time periods. The primary influence that contributed to these inconsistencies was religion. Integration of the two major religions of Japan, Shintoism and Buddhism, created a paradox for the female identity; altering women’s place in Japan’s matriarchal antiquity to a state of acquiescent confinement by the dawn of the Meiji Restoration. Different conjectures of ancient Japanese women were formed in direct correlation to the spiritual beliefs of the time. Evaluating the feminine identities educed by these beliefs illustrates the drastic changes that occurred for women. Through literature and written records a window to the past is created, allowing modern day analysis on the status of women in antiquated Japan.

34 Healthy and Eye-Catching Bento Box Lunch Ideas Partitioned dining may remind you of a TV dinner from the 60s, but compartmental lunches can actually be appetizing, healthy, and appealing. All the rage with the K-5 crowd, bento boxes are gaining steam as a perfectly portioned, creative, fun way to pack and serve lunch—and they’re not just for kids. The bento box hails from Japan and first hit the scene in the sixteenth century. Cuteness is the name of the game in the current trend of bento lunch making: Food is often shaped into animals, flowers, or cartoon characters, though the adorable feast sometimes take longer to prepare than to scarf down. Here we’ve rounded up 32 bento ideas (sans cartoon faces) for kid-friendly, healthy lunches that could also easily fit in at the office. Creative Lunches On-the-Go

Short Film of the Day: Porcelain Unicorn Why Watch? Because sentimentality never dies. This short got some attention when it won a contest created by the Phillips Corporation which had a few restraining parameters in place. The films could only have six lines of dialogue, and they had to be: What is that? japanese artist brings ukiyo-e woodblock prints to life through animated gifs aug 18, 2015 japanese artist brings ukiyo-e woodblock prints to life through animated gifs japanese artist brings ukiyo-e woodblock prints to life through animated gifs(above) katsushika hokusai’s ‘yoshida at tokaido’ animated all gifs courtesy of segawa thirty-seven This Summer's Magical Photos of Japan's Annual Flurry of Fireflies in Forests Summer has arrived, which means longer days and warmer evenings to be spent exploring the great outdoors. In Japan, this season is marked by a magical, natural phenomenon as fireflies spread through the forests around the country, lighting up the night sky. Resembling tiny paper lanterns, these little winged beetles communicate with one another through their steady glows, creating a breathtaking view in the process, if you are lucky enough to stumble upon them. These little creatures typically breed for short periods of time and are difficult to detect when light pollution drowns out their brilliance, so photographers around the country have to be quick and savvy in order to capture their displays of bioluminescence. Further, the little bugs are extremely sensitive, reacting to lights and pollution and typically only live about 10 days, making images that portray their mystical glow that much more special.

The 20 Best Foreign Language Films of the Decade As part of our epic, two week long Decade in Review, master of the Foreign Objects Rob Hunter lays down his picks of the best foreign language films of the decade. I can reel off the best foreign films of the year without pause and feel fairly confident that I haven’t missed anything notable, but best of the decade? Adding to the difficulty is the fact that of the thousands of films released each year in other countries very few of them actually ever reach our shores in any official capacity. Then there’s the issue of release dates… do I use the year the film was first released or the year it finally reached the US? There’s way too much gray area here, so we’re going to simplify things a bit.

Akihito grateful to public for ‘lending an ear’ to his words：The Asahi Shimbun Emperor Akihito expressed gratitude to the public for giving “sincere thought” toward a televised video message that indicated his desire to one day abdicate in favor of his elder son. The emperor’s words came at a news conference on Dec. 20 for release on Dec. 23, his 83rd birthday and a national holiday. The news conference marked his first official comments since his message was broadcast to the nation in August. “I am profoundly grateful that many people have lent an ear to my words and are giving sincere thought to the matter in their respective positions,” Akihito said. He further explained the video message was intended to express “what has been on my mind over the last few years, reflecting on my years as the emperor and contemplating on my role and my duties as the emperor in the days to come.” After the message was broadcast, the government established an experts’ panel to consider how to handle the issue of a possible abdication.