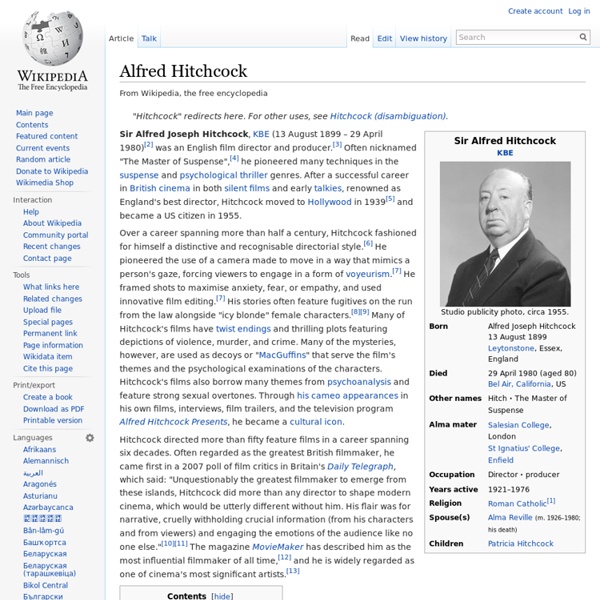 Over a career spanning more than half a century, Hitchcock fashioned for himself a distinctive and recognisable directorial style.[6] He pioneered the use of a camera made to move in a way that mimics a person's gaze, forcing viewers to engage in a form of voyeurism.[7] He framed shots to maximise anxiety, fear, or empathy, and used innovative film editing.[7] His stories often feature fugitives on the run from the law alongside "icy blonde" female characters.[8][9] Many of Hitchcock's films have twist endings and thrilling plots featuring depictions of violence, murder, and crime. Many of the mysteries, however, are used as decoys or "MacGuffins" that serve the film's themes and the psychological examinations of the characters. Hitchcock's films also borrow many themes from psychoanalysis and feature strong sexual overtones. Through his cameo appearances in his own films, interviews, film trailers, and the television program Alfred Hitchcock Presents, he became a cultural icon. Related:  G-L

Claude Lelouch Not to be confused with Lellouche, variant form of the same surname. Claude Barruck Joseph Lelouch (French: [ləluʃ]; born 30 October 1937) is a French film director, writer, cinematographer, actor and producer. Life and career[edit] Lelouch was born in the 9th arrondissement of Paris, the son of Charlotte (née Abeilard) and Simon Lelouch.[1] His father was born to an Algerian Jewish family and his mother was a convert to Judaism.[2][3] His father gave him a camera to give him a fresh start after his failure in the baccalaureat. His first full length film as director, Le Propre de l'homme, was decried by the critics - 'Claude Lelouch, remember this name well, because you will not hear it again' - Cahiers du cinéma said. The 1981 musical epic Les Uns et les Autres is widely considered as his masterpiece, and his credits now add up to 50 or so films. Lelouch is known for making movies based heavily on improvised dialogue. Awards[edit] Filmography[edit] References[edit] External links[edit]

Cédric Klapisch Cédric Klapisch (French: [se.dʁik kla.piʃ] ; born 4 September 1961) is a French film director, screenwriter and producer. Life and career[edit] Klapisch was born at Neuilly-sur-Seine, Hauts-de-Seine. He is from a Jewish family; his maternal grandparents were deported to Auschwitz. He studied cinema at the University of Paris III: Sorbonne Nouvelle as well as at the University of Paris VIII. He was rejected on two occasions by the prestigious French film school IDHEC (Institut des hautes études cinématographiques), now known as La fémis.[1] He later attended the film school at New York University from 1983 to 1985.[2] During the 1980s, he started to shoot short films such as In transit or Ce qui me meut. In 1992, Klapisch shot his first feature film, Riens du tout. In 1996, Klapisch gained greater international recognition after he directed two divergent films, Chacun cherche son chat (When the Cat's Away), and an adaptation of the French theatre comedy Un air de famille. References[edit]

Elia Kazan Elia Kazan (born Elias Kazantzoglou, Greek: Ηλίας Καζαντζόγλου;[2] September 7, 1909 – September 28, 2003) was a Greek-American director, producer, writer and actor, described by The New York Times as "one of the most honored and influential directors in Broadway and Hollywood history".[3] A turning point in Kazan's career came with his testimony as a "friendly witness" before the House Committee on Un-American Activities in 1952 at the time of the Hollywood blacklist, which brought him strong negative reactions from many liberal friends and colleagues. Kazan later explained that he took "only the more tolerable of two alternatives that were either way painful and wrong."[7] Kazan influenced the films of the 1950s and '60s with his provocative, issue-driven subjects. Director Stanley Kubrick called him, "without question, the best director we have in America, [and] capable of performing miracles with the actors he uses Early life[edit] In the play "Paradise Lost" (1937) Stage career[edit]

Sidney Lumet The Encyclopedia of Hollywood states that Lumet was one of the most prolific directors of the modern era, making more than one movie per year on average since his directorial debut in 1957.[1] He was noted by Turner Classic Movies for his "strong direction of actors", "vigorous storytelling" and the "social realism" in his best work.[2] Film critic Roger Ebert described him as having been "one of the finest craftsmen and warmest humanitarians among all film directors."[3] Lumet was also known as an "actor's director," having worked with the best of them during his career, probably more than "any other director A founding member of New York's Actors Studio,[6] Lumet began his directorial career in Off-Broadway productions, then became a highly efficient TV director. In 2005, Lumet received an Academy Award for Lifetime Achievement for his "brilliant services to screenwriters, performers, and the art of the motion picture." Early years[edit] Lumet in the 1940 play, Journey to Jerusalem

Alberto Lattuada Alberto Lattuada (13 November 1914 – 3 July 2005) was an Italian film director. Lattuada was born in Milan, the son of composer Felice Lattuada. He was initially interested in literature, becoming, while still a student, a member of the editorial staff of the antifascist fortnightly "Camminare..." (1932) and part of the artists' group Corrente di Vita (1938). According to an interview of his son (coming with the DVD of Mafioso), Lattuada's father made him complete his studies as an architect even though he recognized his desire to make movies. In 1940 he started his cinema career as a screenwriter and assistant director on Mario Soldati's Piccolo mondo antico ("Old-Fashioned World"). In 1943 he directed his first movie, Giacomo l'idealista. Luci del Varietà (1950), co-directed with Federico Fellini, was the latter's first directorial endeavour. In 1979, New Line Cinema released his erotic film Stay As You Are theatrically in the United States. Filmography (as director)[edit] References[edit]

Stanley Kramer Director Steven Spielberg described him as an "incredibly talented visionary,"[2] and "one of our great filmmakers, not just for the art and passion he put on screen, but for the impact he has made on the conscience of the world."[1] Kramer was recognized for his fierce independence as a producer-director, with author Victor Navasky writing that "among the independents . . . none seemed more vocal, more liberal, more pugnacious than young Stanley Kramer." His friend, Kevin Spacey, during his acceptance speech at the 2015 Golden Globes, honored Kramer's work, calling him "one of the great filmmakers of all time."[3][4] Despite mixed critical reception, both then and now, the film industry heavily promoted Kramer's work with numerous awards. Early years[edit] Stanley Kramer was born in Manhattan, New York, in a neighborhood known as Hell's Kitchen due to its reputation as a tough, gang-ridden area. Kramer attended DeWitt Clinton High School in The Bronx, where he graduated at age fifteen.

Tobe Hooper William Tobe Hooper (born January 25, 1943) is an American film director, screenwriter, and producer best known for his work in the horror film genre. His 1974 film The Texas Chain Saw Massacre was described by Stuart Heritage of The Guardian as "one of the most influential films ever made".[2] Life and career[edit] Hooper was born in Austin, Texas, the son of Lois Belle (née Crosby) and Norman William Ray Hooper,[3] who owned a theater in San Angelo. Hooper spent the 1960s as a college professor and documentary cameraman. He directed The Texas Chain Saw Massacre in 1974. In 2010, writer and actor Mark Gatiss interviewed the director for his BBC documentary series A History of Horror; Hooper appeared in the third episode.[8] Hooper’s first novel, Midnight Movie, was published on Three Rivers Press in 2011.[9] Filmography[edit] Film[edit] Television[edit] Bibliography[edit] Midnight Movie (2011) References[edit] External links[edit] Tobe Hooper at the Internet Movie Database

Christophe Gans Christophe Gans (born 11 March 1960 in Antibes, France) is a French film director, writer, and producer who specializes in horror, fantasy movies and video game adaptations. Biography[edit] His $29 million-budgeted film Brotherhood of the Wolf was a worldwide success, grossing over $70 million+ [1] in theaters worldwide; it also became the second-highest-grossing French-language film in the United States since 1980.[2] Future projects[edit] Filmography[edit] Notes[edit] External links[edit] Darren Lynn Bousman Darren Lynn Bousman (born January 11, 1979) is an American film director and screenwriter. Personal life[edit] Bousman was born in Overland Park, Kansas, the son of Nancy and Lynn Bousman.[1] He is a graduate of the Film School at Full Sail University.[2] He attended high school at Shawnee Mission North High School in Overland Park, and studied film at Full Sail University in Winter Park, Florida.[3] Bousman got engaged to Laura Bosserman on October 4, 2008 and subsequently married her on January 2, 2010. Career[edit] After Saw III, Bousman announced that he would never direct another Saw film so that he would be free to prepare for his project Repo! the Genetic Opera, the stage version of which he had directed in 2002. In 2012, Bousman reunited with Repo! On May 13, 2013, it was announced that Bousman will be directing a film titled Sacrilege, another religious-themed work, the first being 11-11-11. Filmography[edit] Film[edit] Television[edit] Writer[edit] References[edit]

Peter Greenaway Peter Greenaway, CBE (born 5 April 1942) is a British film director. His films are noted for the distinct influence of Renaissance and Baroque painting, and Flemish painting in particular. Common traits in his film are the scenic composition and illumination and the contrasts of costume and nudity, nature and architecture, furniture and people, sexual pleasure and painful death. Early life[edit] Career[edit] 1962–1999[edit] In 1962, Greenaway began studies at Walthamstow College of Art, where a fellow student was musician Ian Dury (later cast in The Cook, the Thief, His Wife & Her Lover). In 1980, Greenaway delivered The Falls (his first feature-length film) – a mammoth, fantastical, absurdist encyclopaedia of flight-associated material all relating to ninety-two victims of what is referred to as the Violent Unknown Event (VUE). 2000–present[edit] Nine Classical Paintings Revisited[edit] Films[edit] Features Shorts Documentaries and mockumentaries Television Exhibitions[edit] References[edit]

Tsui Hark Early life[edit] Tsui was born and raised in Saigon, Vietnam, to a large Hoa family with sixteen siblings.[2] Tsui showed an early interest in show business and films; when he was 10, he and some friends rented an 8 mm camera to film a magic show they put on at school. He also drew comic books, an interest that would influence his cinematic style. By the age of 13, he and his family immigrated to Hong Kong.[3] Tsui started his secondary education in Hong Kong in 1966. After graduation, Tsui moved to New York City, where he worked on From Spikes to Spindles (1976), a noted documentary film by Christine Choy on the history of the city's Chinatown. Career[edit] New Wave period[edit] Upon turning to feature filmmaking, Tsui was quickly typed as a member of the "New Wave" of young, iconoclastic directors. Tsui's third film, Dangerous Encounter of the First Kind (1980), put him beyond the pale. Cinema City[edit] Mogul[edit] American films[edit] 2000s[edit] 2010s[edit] Possible future projects[edit]