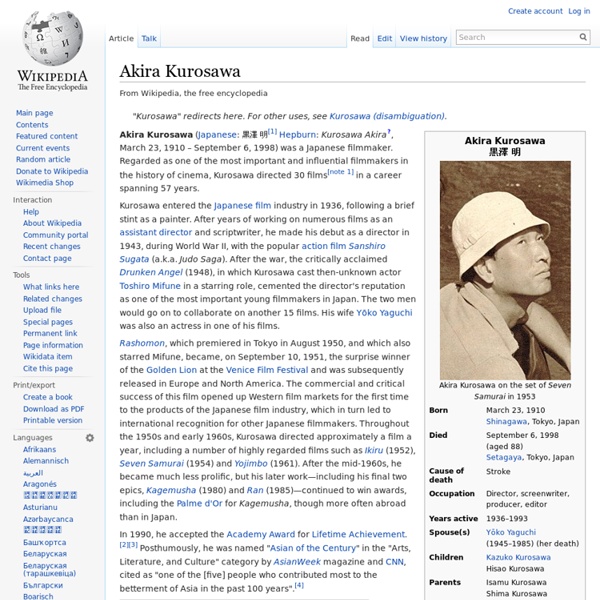 Toshiro Mifune Early life[edit] Toshiro Mifune was born on 1 April 1920 in Qingdao, Shandong, China, to Japanese parents. His parents were Methodist missionaries working there. Mifune grew up with his parents and two younger siblings in Dalian, Liaoning, China, and, from 4 to 19 years of age, in Manchuria.[1] In his youth, Mifune worked in the photography shop of his father Tokuzo, a commercial photographer and importer who had emigrated from northern Japan. Early work[edit] In 1947, one of Mifune's friends who worked for the Photography Department of Toho Productions suggested Mifune try out for the Photography Department. At this time, a large number of Toho actors, after a prolonged strike, had left to form their own company, Shin Toho. Mifune first encountered director Akira Kurosawa when Toho Studios, the largest film production company in Japan, was conducting a massive talent search, during which hundreds of aspiring actors auditioned before a team of judges. Marriage[edit] Honors[edit] English:

List of creative works by Akira Kurosawa The following is a list of works, both in film and other media, for which the Japanese filmmaker Akira Kurosawa made some documented creative contribution. This includes a complete list of films with which he was involved (including the films on which he worked as assistant director before becoming a full director), as well as his little-known contributions to theater, television and literature. Filmography[edit] As director[edit] A documentary film about the Noh theater, Gendai no No (Modern Noh), which was begun by the director during a break in the shooting of Ran, but was abandoned after about fifty minutes were filmed, is being completed according to Kurosawa's script and notes.[1][2] As producer[edit] Note: Data for the remainder of this filmography is derived primarily from the complete filmography created by Kurosawa's biographer, Stuart Galbraith IV,[3] supplemented by IMDB's Kurosawa page.[4] For the following films that Kurosawa directed, he also received a production credit:

Rashomon (film) The film is known for a plot device which involves various characters providing alternative, self-serving and contradictory versions of the same incident. The name of the film refers to the enormous city gate of Kyoto.[1] Although the film was released to only a small number of cinemas internationally, Rashomon introduced Kurosawa and the Japanese film to Western audiences. Plot[edit] The film opens on a woodcutter (木樵り; Kikori, played by Takashi Shimura) and a priest (旅法師; Tabi Hōshi, Minoru Chiaki) sitting beneath the Rajōmon city gate to stay dry in a downpour. The bandit's story[edit] Tajōmaru (Toshiro Mifune), a notorious brigand, claims that he tricked the samurai to step off the mountain trail with him and look at a cache of ancient swords he discovered. The wife's story[edit] The samurai's wife (Machiko Kyō) tells a different story to the court. The samurai's story[edit] The woodcutter's story[edit] Climax[edit] These deceptions and lies shake the priest's faith in humanity.

Michael Haneke In 2013 Haneke won the Prince of Asturias Award for the arts. Life and career[edit] Haneke was born in Munich, Germany, the son of the German actor and director Fritz Haneke and the Austrian actress Beatrix von Degenschild. His stepfather, the composer Alexander Steinbrecher (de), had later married the mother of actor Christoph Waltz.[6] Haneke was raised in the city of Wiener Neustadt, Austria, and later attended the University of Vienna to study philosophy, psychology and drama after failing to achieve success in his early attempts in acting and music. After graduating, he became a film critic and from 1967 to 1970 he worked as editor and dramaturg at the southwestern German television station Südwestfunk. He made his debut as a television director in 1974. Haneke says that films should offer viewers more space for imagination and self-reflection. His next film will be entitled Flashmob. Stage work[edit] Quotes[edit] —From "Film as catharsis".[15] Filmography[edit] Feature films[edit]

Noren Traditional fabric shop in Nara with noren in front of the entrance Noren with the ゆ sign, marking a bath house Noren (暖簾) are traditional Japanese fabric dividers, hung between rooms, on walls, in doorways, or in windows. They usually have one or more vertical slits cut from the bottom to nearly the top of the fabric, allowing for easier passage or viewing. Sentō (commercial bathhouses) also place noren across their entrances, typically blue in color for men and red for women with the kanji 湯 (yu, lit. hot water) or the corresponding hiragana ゆ. See also[edit] External links[edit] Media related to Noren at Wikimedia Commons

Jean-Luc Godard Jean-Luc Godard (French: [ʒɑ̃lyk ɡɔdaʁ]; born 3 December 1930) is a French-Swiss film director, screenwriter and film critic. He is often identified with the 1960s French film movement La Nouvelle Vague, or "New Wave". Like his New Wave contemporaries, Godard criticized mainstream French cinema's "Tradition of Quality", which "emphasized craft over innovation, privileged established directors over new directors, and preferred the great works of the past to experimentation." In a 2002 Sight & Sound poll, Godard ranked third in the critics' top-ten directors of all time (which was put together by assembling the directors of the individual films for which the critics voted).[6] He is said to have "created one of the largest bodies of critical analysis of any filmmaker since the mid-twentieth century." Early life[edit] Early career (1950–59)[edit] Film criticism[edit] In Paris, in the Latin Quarter just prior to 1950, ciné-clubs (film societies) were gaining prominence. Filmmaking[edit]

know more Stanley Kubrick Stanley Kubrick (/ˈkuːbrɪk/; July 26, 1928 – March 7, 1999) was an American film director, screenwriter, producer, cinematographer and editor who did much of his work in the United Kingdom. Part of the New Hollywood film-making wave, he is regarded as one of the greatest and most influential directors of all time. His films, typically adaptations of novels or short stories, are noted for their "dazzling" and unique cinematography, attention to detail in the service of realism, and the evocative use of music. Kubrick's films covered a variety of genres, including war, crime, literary adaptations, romantic and black comedies, horror, epic, and science fiction. Kubrick was also noted for being a demanding perfectionist, using painstaking care with scene staging, camera-work and coordinating extremely closely both with his actors and his behind-scenes collaborators. Early life[edit] Kubrick as an infant with his father, Jack Photographic career[edit] Film career[edit] Short films[edit] R. A.I.

animated knots Na Hong-jin Filmography[edit] References[edit] External links[edit] japan Japan i/dʒəˈpæn/ (Japanese: 日本 Nippon or Nihon; formally 日本国 Nippon-koku or Nihon-koku, literally the "State of Japan") is an island nation in East Asia. Located in the Pacific Ocean, it lies to the east of the Sea of Japan, China, North Korea, South Korea and Russia, stretching from the Sea of Okhotsk in the north to the East China Sea and Taiwan in the south. The characters that make up Japan's name mean "sun-origin", which is why the country is sometimes referred to as the "Land of the Rising Sun". Japan is an archipelago of 6,852 islands, the four largest being Honshu, Hokkaido, Kyushu and Shikoku. Archaeological research indicates that people lived in Japan as early as the Upper Paleolithic period. Periodic insurrections and civil disturbances continued into the 1870s. Etymology The English word Japan derives from the Chinese pronunciation of the Japanese name, 日本 , which in Japanese is pronounced Nippon listen or Nihon listen . History Prehistory and ancient history Feudal era