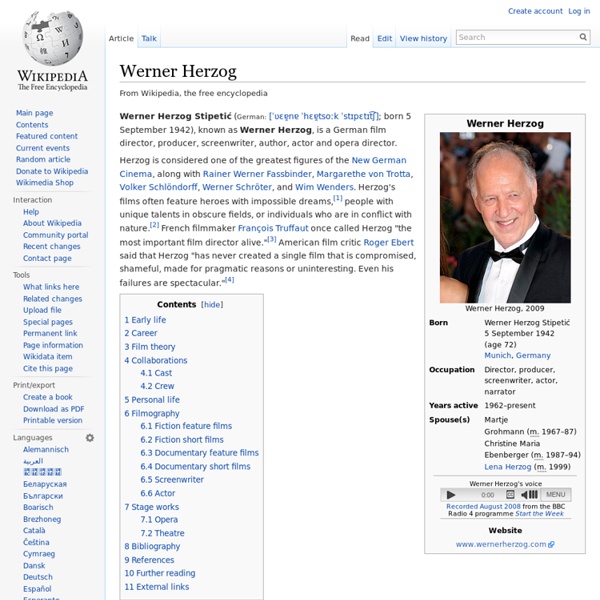 Michael Haneke In 2013 Haneke won the Prince of Asturias Award for the arts. Life and career[edit] Haneke was born in Munich, Germany, the son of the German actor and director Fritz Haneke and the Austrian actress Beatrix von Degenschild. Haneke says that films should offer viewers more space for imagination and self-reflection. His next film will be entitled Flashmob. Stage work[edit] Haneke has directed a number of stage productions in German, which include works by Strindberg, Goethe, and Heinrich von Kleist in Berlin, Munich and Vienna. Quotes[edit] "My films are intended as polemical statements against the American 'barrel down' cinema and its dis-empowerment of the spectator. —From "Film as catharsis".[15] "Pornography, it seems to me, is no different from war films or propaganda films in that it tries to make the visceral, horrific, or transgressive elements of life consumable. "Film is 24 lies per second at the service of truth, or at the service of the attempt to find the truth." Filmography[edit]

Jean-Luc Godard Jean-Luc Godard (French: [ʒɑ̃lyk ɡɔdaʁ]; born 3 December 1930) is a French-Swiss film director, screenwriter and film critic. He is often identified with the 1960s French film movement La Nouvelle Vague, or "New Wave". Like his New Wave contemporaries, Godard criticized mainstream French cinema's "Tradition of Quality", which "emphasized craft over innovation, privileged established directors over new directors, and preferred the great works of the past to experimentation." To challenge this tradition, he and like-minded critics started to make their own films. In a 2002 Sight & Sound poll, Godard ranked third in the critics' top-ten directors of all time (which was put together by assembling the directors of the individual films for which the critics voted).[6] He is said to have "created one of the largest bodies of critical analysis of any filmmaker since the mid-twentieth century." Early life[edit] Early career (1950–59)[edit] Film criticism[edit] Filmmaking[edit] Films[edit]

Stanley Kubrick Stanley Kubrick (/ˈkuːbrɪk/; July 26, 1928 – March 7, 1999) was an American film director, screenwriter, producer, cinematographer and editor who did much of his work in the United Kingdom. Part of the New Hollywood film-making wave, he is regarded as one of the greatest and most influential directors of all time. His films, typically adaptations of novels or short stories, are noted for their "dazzling" and unique cinematography, attention to detail in the service of realism, and the evocative use of music. Kubrick's films covered a variety of genres, including war, crime, literary adaptations, romantic and black comedies, horror, epic, and science fiction. Kubrick was also noted for being a demanding perfectionist, using painstaking care with scene staging, camera-work and coordinating extremely closely both with his actors and his behind-scenes collaborators. Early life[edit] Kubrick as an infant with his father, Jack Photographic career[edit] Film career[edit] Short films[edit] R. A.I.

Na Hong-jin Filmography[edit] References[edit] External links[edit] Norman Jewison Early life[edit] Jewison was born in Toronto, Ontario, the son of Dorothy Irene (née Weaver) and Percy Joseph Jewison, who managed a convenience store and post office.[1] He attended Kew Beach School and Malvern Collegiate Institute, and while growing up in the 1930s displayed an aptitude for performing and theatre. Jewison was often mistaken for Jewish due to his surname, though he and his family were actually Protestant.[2] He served in the Royal Canadian Navy (1944–1945) during World War II, and after being discharged traveled in the American South, where he encountered segregation, an experience that would influence his later work.[3] Jewison attended Victoria College in the University of Toronto, graduating with a B.A. in 1949. Career[edit] Television[edit] Film[edit] Jewison's next film proved to be one of the most popular romantic films ever made. Achievements[edit] Jewison has been selected as the recipient of the lifetime achievement award from the Directors Guild of America.

Mike Judge This article is about the cartoonist. For the billiards player, see Michael Judge. For the Roman Catholic priest, see Mychal Judge. Early life and education[edit] Career[edit] After graduating from UCSD with a degree in physics, Judge's first job was as a programmer for the F-18 fighter at Support Systems Associates, Inc. Animation, film, and TV work[edit] In 1997, Judge created King of the Hill for the Fox Network. In 1999, Judge had a voice cameo in South Park: Bigger, Longer and Uncut, the feature-length film adaptation of the popular Comedy Central series; he voiced Kenny McCormick when he was unhooded towards the end of the film. Since fall 2003, Judge and fellow animator Don Hertzfeldt have run an animation festival, "The Animation Show". In 2005, Mike Judge was presented with the Austin Film Festival's Outstanding Television Writer Award by Johnny Hardwick. His newest animated series, The Goode Family, debuted on ABC and was cancelled after one season. Political views[edit]