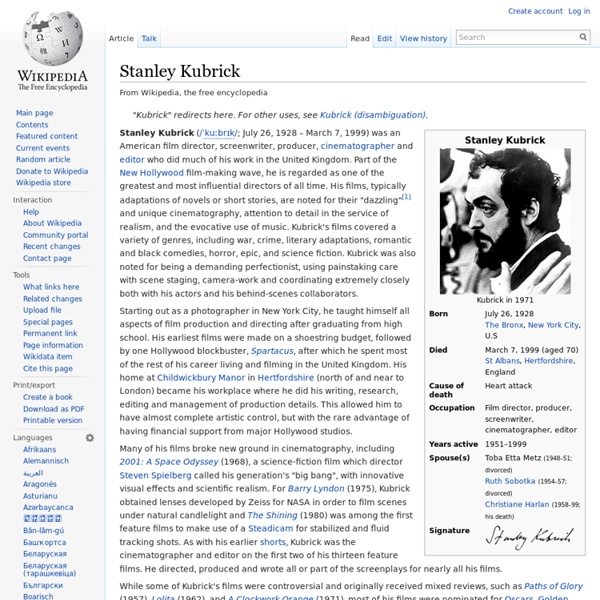 Stanley Kubrick (/ˈkuːbrɪk/; July 26, 1928 – March 7, 1999) was an American film director, screenwriter, producer, cinematographer and editor who did much of his work in the United Kingdom. Part of the New Hollywood film-making wave, he is regarded as one of the greatest and most influential directors of all time. His films, typically adaptations of novels or short stories, are noted for their "dazzling" and unique cinematography, attention to detail in the service of realism, and the evocative use of music. Kubrick's films covered a variety of genres, including war, crime, literary adaptations, romantic and black comedies, horror, epic, and science fiction. Kubrick was also noted for being a demanding perfectionist, using painstaking care with scene staging, camera-work and coordinating extremely closely both with his actors and his behind-scenes collaborators. Early life[edit] Kubrick as an infant with his father, Jack Photographic career[edit] Film career[edit] Short films[edit] R. A.I. Related:  G-L

Jean-Luc Godard Jean-Luc Godard (French: [ʒɑ̃lyk ɡɔdaʁ]; born 3 December 1930) is a French-Swiss film director, screenwriter and film critic. He is often identified with the 1960s French film movement La Nouvelle Vague, or "New Wave". Like his New Wave contemporaries, Godard criticized mainstream French cinema's "Tradition of Quality", which "emphasized craft over innovation, privileged established directors over new directors, and preferred the great works of the past to experimentation." In a 2002 Sight & Sound poll, Godard ranked third in the critics' top-ten directors of all time (which was put together by assembling the directors of the individual films for which the critics voted).[6] He is said to have "created one of the largest bodies of critical analysis of any filmmaker since the mid-twentieth century." Early life[edit] Early career (1950–59)[edit] Film criticism[edit] In Paris, in the Latin Quarter just prior to 1950, ciné-clubs (film societies) were gaining prominence. Filmmaking[edit]

Ho‘okuleana: Kyoto Gardens Driving down the Pali, after you pass Kapena Falls, off to the right are a number of cemeteries (including Mauna ʻAla, Oʻahu Cemetery and others – including Honolulu Memorial Park.) Part of the Honolulu Memorial Park, rising out of the foliage, is the Sanju Pagoda – it’s discernible and it’s deteriorating. With over 20-years of neglect, the neoprene roofing material has sprung leaks, exposing the reinforced concrete rafters to weakening moisture and decay. The pagoda is the only concrete pagoda outside of Japan and is built in the authentic fashion of a wood-constructed pagoda. The neoprene was supposed to be the best thing ever, but it turned out to be not so good. Located in the eastern half of the Honolulu Memorial Park, Kyoto Gardens consists of two large columbarium (a structure of vaults lined with recesses for urns holding a deceased’s cremated remains) structures and a Japanese garden. The inscription on the bell was written in both Japanese and English.

Terrence Malick Early life[edit] Film career[edit] Malick started his film career after earning an MFA from the AFI Conservatory in 1969, directing the short film "Lanton Mills". Paramount Pictures produced Malick's second film, Days of Heaven (1978), about a love triangle that develops in the farm country of the Texas Panhandle in the early 20th century. Those rambling philosophical voiceovers; the placid images of nature, offering quiet contrast to the evil deeds of men; the stunning cinematography, often achieved with natural light; the striking use of music – here is a filmmaker with a clear sensibility and aesthetic who makes narrative films that are neither literary nor theatrical, in the sense of foregrounding dialogue, event, or character, but are instead principally cinematic, movies that suggest narrative, emotion, and idea through image and sound. Chris Wisniewski about Days of Heaven and The New World[17] A. Personal life[edit] As of at least 2011, Malick resides in Austin, Texas.[46]

Michael Haneke In 2013 Haneke won the Prince of Asturias Award for the arts. Life and career[edit] Haneke was born in Munich, Germany, the son of the German actor and director Fritz Haneke and the Austrian actress Beatrix von Degenschild. His stepfather, the composer Alexander Steinbrecher (de), had later married the mother of actor Christoph Waltz.[6] Haneke was raised in the city of Wiener Neustadt, Austria, and later attended the University of Vienna to study philosophy, psychology and drama after failing to achieve success in his early attempts in acting and music. After graduating, he became a film critic and from 1967 to 1970 he worked as editor and dramaturg at the southwestern German television station Südwestfunk. He made his debut as a television director in 1974. Haneke says that films should offer viewers more space for imagination and self-reflection. His next film will be entitled Flashmob. Stage work[edit] Quotes[edit] —From "Film as catharsis".[15] Filmography[edit] Feature films[edit]

L. Frank Baum Childhood and early life[edit] Baum was born in Chittenango, New York, in 1856, into a devout Methodist family. He had German, Scots-Irish, and English ancestry, and was the seventh of nine children of Cynthia Ann (née Stanton) and Benjamin Ward Baum, only five of whom survived into adulthood.[2][3] He was named "Lyman" after his father's brother, but always disliked this name, and preferred to go by his middle name, "Frank".[4] Benjamin Baum was a wealthy businessman, a barrel maker who ultimately made a fortune in the Pennsylvania oil rush. Baum started writing at an early age, perhaps due to an early fascination with printing. Despite financial difficulties, Baum was always the spotlight of fun around the household. Career[edit] Theater[edit] The South Dakota years[edit] In July 1888, Baum and his wife moved to Aberdeen, Dakota Territory, where he opened a store, "Baum's Bazaar". Writing[edit] Promotional Poster for Baum's "Popular Books For Children", 1901. The Wizard of Oz: Fred R.

40 Best Small Living Room Ideas 2018 | Living Room A big challenge is creating a small living room ideas with modern methods to exploit the space well. But we should be thinking in this situation is to find an appropriate solution! For small living room Ideas. The use of optical illusions is essential in decoration to show some room bigger and wider than it is. So we offer you today through this article some tricks for small living rooms ideas decoration: 1. choose colors: in order to seem more living room decor should focus on the bright color choices rather than dark colors. 2. lighting: when choosing a living room decor you should pay attention to is the lighting that has a significant impact on the appearance of widening or narrowing it down. 3. color: no color diversity abound in a small living room because it would jeopardize its size than to that which was adopted by the uniform color and, of course, you can color gradients that you chose to paint his room. Are you looking for small living room ideas? The mirrors The corners

Charlie Kaufman He has been nominated for three Academy Awards: twice for Best Original Screenplay for Being John Malkovich and Eternal Sunshine of the Spotless Mind, winning the award for the latter, and Best Adapted Screenplay (with his fictional brother) for Adaptation. He also won two BAFTA Award for Best Original Screenplays, one BAFTA Award for Best Adapted Screenplay and a Saturn Award for Best Writing. Early career[edit] Film[edit] Kaufman also penned the screenplay for Confessions of a Dangerous Mind, a biopic based on the "unauthorized autobiography" of Chuck Barris, the creator of such popular game shows as The Dating Game and host of The Gong Show. In late December 2010, several sources indicated that Kaufman would be reuniting with longtime collaborator Spike Jonze.[8] Very little is known about the project except that it will be a political satire.[9] Kaufman was slated to write and direct a film with the working title Frank or Francis. Theater[edit] Press appearances[edit] Personal life[edit]

Will Eisner William Erwin "Will" Eisner (March 6, 1917 – January 3, 2005) was an American cartoonist, writer, and entrepreneur. He was one of the earliest cartoonists to work in the American comic book industry, and his series The Spirit (1940–1952) was noted for its experiments in content and form. In 1978, he popularized the term "graphic novel" with the publication of his book A Contract with God. Biography[edit] Family background[edit] Eisner's father Shmuel "Samuel" Eisner was born March 6, 1886, in Kollmei, Austria-Hungary, and was one of eleven children. Eisner's mother, Fannie Ingber, was born to Jewish parents from Romania April 25, 1891, on a ship bound for the US. Family introduced Shmul and Fannie, who were distant relatives. Early life[edit] Wow, What a Magazine! Eisner was born in Brooklyn, New York City. Young Eisner was tall and of sturdy build, but lacked athletic skills. Eisner attended DeWitt Clinton High School. Eisner & Iger[edit] The Spirit[edit] World War II and Joe Dope[edit]

1 year traveling Indonesia in 4 minutes Kim Jee-woon Kim Jee-woon (born May 27, 1964) is a South Korean film director and screenwriter.[1] Kim Jee-woon has a history of successfully tackling a wide range of film genres, garnering a cult following among fans of Asian cinema.[2] Career[edit] Summary[edit] Kim started out directing theater, but has worked with increasing levels of success in cinema, showing accomplished acting and a detailed stylization in his films.[3] Kim also pays careful attention to the release of his films on DVD and goes to greater than usual lengths to package them with extensive documentary materials and revealing commentary tracks.[4] Kim is growing substantially both as a director and a visual stylist as demonstrated by two of his most recent films A Tale of Two Sisters and A Bittersweet Life both of which were received as critical and commercial successes.[4] The Quiet Family[edit] The Foul King[edit] In 2000, Kim directed and wrote his second feature film, The Foul King (2000), re-uniting again with Song Kang-ho.

Albert Camus Albert Camus (French: [albɛʁ kamy] ( Camus did not consider himself to be an existentialist despite usually being classified as one, even during his own lifetime.[1] In an interview in 1945, Camus rejected any ideological associations: "No, I am not an existentialist. Sartre and I are always surprised to see our names linked...".[2] Camus was born in French Algeria to a Pied-Noir family, and studied at the University of Algiers. Camus was awarded the 1957 Nobel Prize for Literature "for his important literary production, which with clear-sighted earnestness illuminates the problems of the human conscience in our times".[5] Early years[edit] Camus joined the French Communist Party in the spring of 1935, seeing it as a way to "fight inequalities between Europeans and 'natives' in Algeria." Marriages[edit] In 1934, Camus married Simone Hié, but the marriage ended as a consequence of infidelities on both sides. [edit] Revolutionary Union Movement and Europe[edit] Death[edit] Literary career[edit]