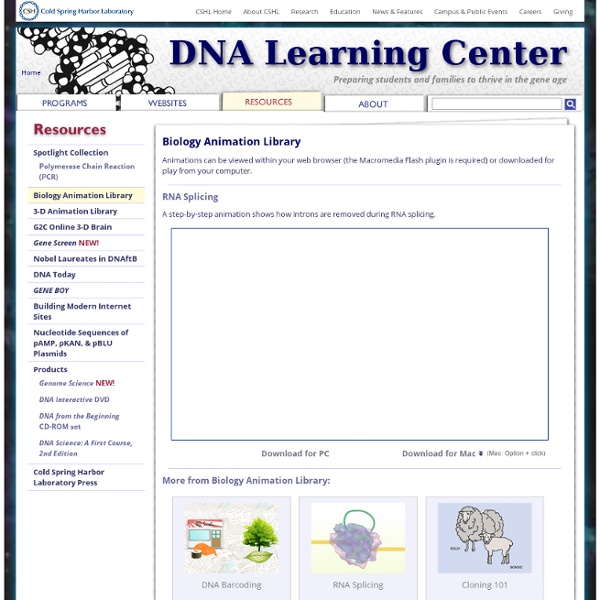 Biology Animations Carnegie Mellon's Office of Technology for Education and Department of Biological Sciences create multimedia materials for teaching and learning Biology. After an analysis of a number of Biology courses was performed to identify when and how shared concepts where taught, a team of biologists, media programmers, and learning experts came together to create animations designed to improve understanding of some of the main concepts taught in Modern Biology and Biochemistry. Phosopholipid Membranes Tutorial page describing the construction and properties of Biological Membranes. Biological Membranes Biological membranes are dynamic structures composed of a diverse set of phospholipid molecules and proteins. Phase Transition This tutorial explains how phospholipids bilayers undergo to a cooperative phase transition or melting that is similar to protein denaturation. back to index Signal Transdaction Serine Protease Uniport - Glucose Transport Symport - Lactose Permease Transporter ATP Synthesis

The PCR Method - a DNA Copying Machine Lists of Nobel Prizes and Laureates The PCR Method - a DNA Copying Machine Play the Eye of the Donkey Game About the game PCR is a method by which a few fragments of DNA can be duplicated into millions in a couple of hours. This makes PCR a very useful method in, amongst other fields, forensic science. The Nobel Prize The 1993 Nobel Prize in Chemistry was awarded for the invention of PCR, a method that made it possible to copy a large numbers of DNA fragments in only a few hours. Share this: Share on facebook Share on google_plusone_share Share on twitter More Sharing Services Share on email To cite this pageMLA style: "The PCR Method - a DNA Copying Machine". Recommended: The Legacy of Alfred Nobel On 27 November 1895 Alfred Nobel signed his last will in Paris. Play the Blood Typing Game Try to save some patients and learn about human blood types! Unlocking the Secrets of Our Cells Discover the 2012 awarded research on stem cells and cell signalling. Contact E-mail us Press Sitemap A-Z Index Terms

Visualizing How A Population Grows To 7 Billion 7 Billion: How Did We Get So Big So Fast? Watch as global population explodes from 300 million to 7 billion. Sometime Monday, the world will have more humans than ever: 7 billion, according to the U.N. The U.N. estimates that the world's population will pass the 7 billion mark on Monday. Much of that growth has happened in Asia — in India and China. Those two countries have been among the world's most populous for centuries. Due in part to that region's extreme poverty, infant mortality rates are high and access to family planning is low. As NPR's Adam Cole reports, it was just over two centuries ago that the global population was 1 billion — in 1804. As higher standards of living and better health care are reaching more parts of the world, the rates of fertility — and population growth — have started to slow down, though the population will continue to grow for the foreseeable future.

Make your own cartoons and animations easily. Our tools are free and you don't need to learn Flash. Circulatory System Circulatory System for Kids The human circulatory system consists of vessels, muscles and organs that help and control the flow of the blood and lymph around the body. It is collectively composed of the cardiovascular system and the lymphatic system with the heart, arteries, capillaries, veins and the blood being the main parts. The circulatory system moves nutrients, gases, and wastes to and from cells to maintain homeostasis. It helps fight diseases, maintains body temperature and pH. Play Quiz Games : NeoK12 is iPad & Android tablet ready. Science Games, Diagrams & Activities : Pictures & School Presentations : Science Videos & Lessons:(Reviewed by K-12 teachers) Search Videos Suggest Science Videos Click below to find & suggest other science videos. Topic : Circulatory System Standards Common Core State Standards Videos are embedded and streamed directly from video sites such as YouTube and others.