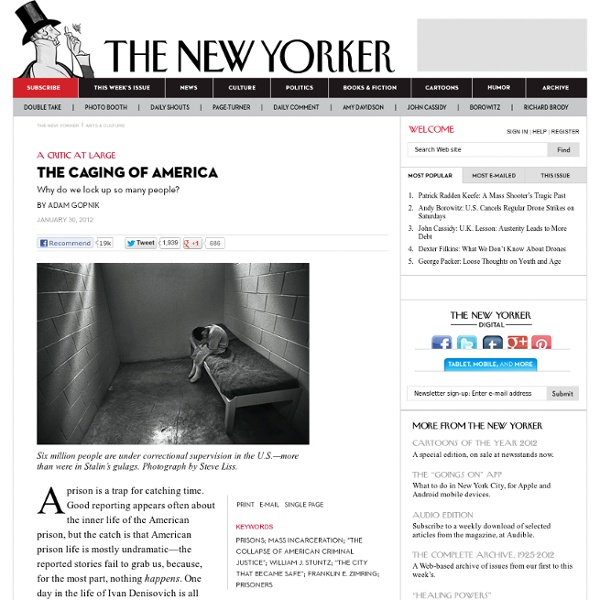 A prison is a trap for catching time. Good reporting appears often about the inner life of the American prison, but the catch is that American prison life is mostly undramatic—the reported stories fail to grab us, because, for the most part, nothing happens. One day in the life of Ivan Denisovich is all you need to know about Ivan Denisovich, because the idea that anyone could live for a minute in such circumstances seems impossible; one day in the life of an American prison means much less, because the force of it is that one day typically stretches out for decades. It isn’t the horror of the time at hand but the unimaginable sameness of the time ahead that makes prisons unendurable for their inmates. The inmates on death row in Texas are called men in “timeless time,” because they alone aren’t serving time: they aren’t waiting out five years or a decade or a lifetime. The basic reality of American prisons is not that of the lock and key but that of the lock and clock.

Bank robber-turned-law professor argues importance of 'second chances' for Louisiana prisoners Shon Hopwood landed in federal prison as a young man after participating in several bank robberies across rural Nebraska. Now he's a practicing attorney and professor at Georgetown Law School. Hopwood related the tale of his transformation Friday to hundreds of people at Baton Rouge's L'Auberge Casino during a seminar focused on boosting opportunities for former Louisiana prisoners transitioning back into society.

William James Proposes the Moral Equivalent of War Voices in Time The war against war is going to be no holiday excursion or camping party. The military feelings are too deeply grounded to abdicate their place among our ideals until better substitutes are offered than the glory and shame that come to nations as well as to individuals from the ups and downs of politics and the vicissitudes of trade. There is something highly paradoxical in the modern man’s relation to war. Ask all our millions, north and south, whether they would vote now (were such a thing possible) to have our war for the Union expunged from history, and the record of a peaceful transition to the present time substituted for that of its marches and battles, and probably hardly a handful of eccentrics would say yes. Those ancestors, those efforts, those memories and legends are the most ideal part of what we now own together, a sacred spiritual possession worth more than all the blood poured out.

The State of US Surveillance Submitted by Doug Hornig of Casey Research The State of US Surveillance Lovers of liberty have seemingly had a good bit to celebrate recently. First, there was an unprecedented outpouring of negative public sentiment about the Congressional bills SOPA (House) and PIPA (Senate); they are legislation that would have thrown a large governmental monkey wrench into the relatively smooth-running cogs of the Internet. Millions of Americans signed online petitions against the bills after seeing websites' various protests. Google shrouded its search page in black; Wikipedia and Reddit went dark entirely (although Wikipedia could be accessed if one read the information available via clicking the sole link on its protest page); Facebook and Twitter urged users to contact their representatives; and many other core Internet businesses also raised their voices in opposition.

US Has the Most Prisoners in the World WASHINGTON - Tough sentencing laws, record numbers of drug offenders and high crime rates have contributed to the United States having the largest prison population and the highest rate of incarceration in the world, according to criminal justice experts. A U.S. Justice Department report released on November 30 showed that a record 7 million people -- or one in every 32 American adults -- were behind bars, on probation or on parole at the end of last year. Of the total, 2.2 million were in prison or jail. According to the International Centre for Prison Studies at King's College in London, more people are behind bars in the United States than in any other country. China ranks second with 1.5 million prisoners, followed by Russia with 870,000.

Frances Crook: Our Justice System Should Be Smarter and Smaller - Not Privatised "Nothing short of shambolic" uttered the softly spoken Sir Alan Beith MP, chairman of the Justice Select Committee, as he was passing judgement on the government's handling of court interpretation services. This service may sound like a minor detail, but failing to provide an interpreter at the right time can lead to victims and their families, some of whom will have waited years for a case to come to court, see the trial collapse before their very eyes. Similarly, innocent people can languish in remand cells while the courts struggle to find an interpreter. These, according to the committee's report, have formed just part of the litany of failings in a poorly managed outsourcing process, which has wasted taxpayers' money and court time, while being unfair to victims and suspects alike.

Former McDonald's Honchos Take On Sustainable Cuisine Photo: James Wojcik The big dude with the tattoos and a bad case of five o’clock shadow served up a plate of roasted kabocha squash, organic brussels sprouts, and free-range chicken breast. None of this would have been worth noting had the dish been just another locavore delicacy, prepared by just another hipster chef, during just another lunch hour here among the food-obsessed in Palo Alto, California.

Why are so many Americans in prison? - Inside Story Americas The US has the highest prison population in the world - some of whom have been subjected to lengthy sentences for relatively minor crimes. And that population has surged over the past three decades. Although there has been a slight reduction in the past year, more than two million people are either incarcerated in prison or in jail awaiting trial. The US has the highest rate of imprisonment in the world, with 743 people incarcerated for every 100,000 Americans. No other nation even comes close to these figures.

Eugene Robinson: Defusing a Sociological Bomb Defusing a Sociological Bomb Posted on Jan 7, 2011 By Eugene Robinson Race still matters in America and justice is not completely blind. RIP Military Historian John Keegan, Who Saw War as Product of Culture Rather than Biology John Keegan, whom The New York Times called “the preeminent military historian of his era,” is dead. 78 years old, he died after a long illness in England, where he was born and bred. Among his 20-plus books was A History of Warfare (Alfred A. Knopf, 1993), one of the best-written and most insightful investigations of violent conflict that I’ve read. Keegan takes you through the entire history of war, from the ancient Greek battles chronicled by Thucydides right up through the Cold War and the First Gulf War. Keegan’s book serves as a potent counterpoint to—and more, refutation of—popular claims by scientists such as Richard Wrangham and Edward O.