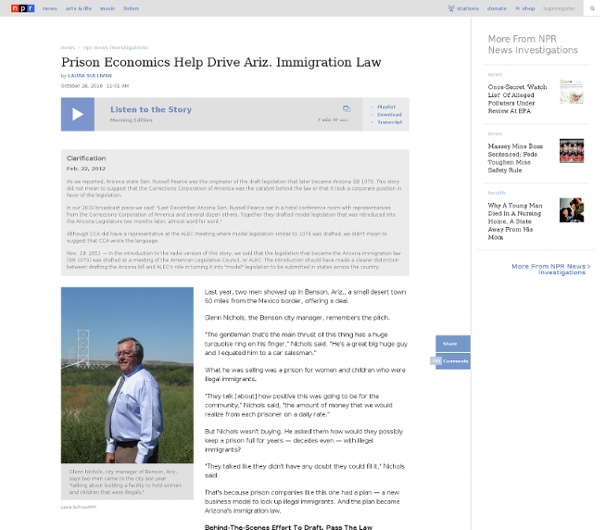 hide captionGlenn Nichols, city manager of Benson, Ariz., says two men came to the city last year "talking about building a facility to hold women and children that were illegals." Laura Sullivan/NPR Last year, two men showed up in Benson, Ariz., a small desert town 60 miles from the Mexico border, offering a deal. Glenn Nichols, the Benson city manager, remembers the pitch. "The gentleman that's the main thrust of this thing has a huge turquoise ring on his finger," Nichols said. What he was selling was a prison for women and children who were illegal immigrants. "They talk [about] how positive this was going to be for the community," Nichols said, "the amount of money that we would realize from each prisoner on a daily rate." But Nichols wasn't buying. "They talked like they didn't have any doubt they could fill it," Nichols said. That's because prison companies like this one had a plan — a new business model to lock up illegal immigrants. Behind-The-Scenes Effort To Draft, Pass The Law

Pakistan neuroscientist given 86 years for shooting at US agents | World news Outrage in Karachi after Aafia Siddiqui, a US-trained Pakistani neuroscientist named as one of the FBI's most wanted terrorists, receives an 86-year jail sentence in New York for shooting at the US soldiers keeping her prisoner Link to video: Pakistani neuroscientist's sentence sparks protests Aafia Siddiqui, a US-trained Pakistani neuroscientist who was named as one of the FBI's most wanted terrorists, was today sentenced to 86 years in prison by a New York court, in a case that has prompted outrage in Pakistan. Siddiqui, 38, was convicted of attempted murder this year after shooting at US soldiers and FBI agents in Afghanistan in 2008 as she tried to escape from custody. Siddiqui claimed she had been abducted by US agents and held incommunicado in Afghanistan for five years. The case has drawn appeals from the Pakistani government for her release, and divided legal opinion. Siddiqui's family in Karachi accused the US justice system of bias against Muslims.

The Largest Prison Strike In American History Goes Ignored By US Media Dec 16, 2010 Today marks the end of a seven-day strike where tens of thousands of inmates in Georgia refused to work or leave their cells until their demands had been met. The odd thing is, that until today, no one had ever heard about this strike. Inmates in ten Georgia prisons, Baldwin, Hancock, Hays, Macon, Smith and Telfair State Prisons, to name a few, went on strike last Thursday to protest their treatment and demand their human rights. According to an article by Facing South, Department of Corrections have been nervous about deteriorating conditions in Georgia’s prisons since early 2010. Poor conditions and substandard medical care are also on the inmates’ list of demands. As it goes, prisoners in Georgia are forced to work without pay for their labor—seemingly a violation of the 13th Amendment, which prohibits slavery and involuntary servitude. For months the prisoners had apparently used cell phones to get in touch with inmates from other prisons, organizing a non-violent strike.

The Way to Stop Prison Rape - The New York Review of Books As three recent studies by the federal Bureau of Justice Statistics (BJS) show, prisoners are raped with terrible frequency in the United States. We still don’t know exactly how many people are sexually abused behind bars every year, but we do know that the number is much larger than 100,000. And we know that those responsible for this abuse are usually not other inmates, but members of the very corrections staff charged with protecting the people in their custody. The BJS, which is part of the Department of Justice, found statistically significant variation in the incidence of sexual abuse at the hundreds of different facilities it surveyed. Its study of adult prisons, for example, found that 4.5 percent of prisoners nationwide had been sexually abused at their current facilities in the preceding year; but at seven prisons the rate was above 10 percent. Texas’s Estelle Unit had a rate of 15.7 percent, while in six prisons no inmates reported such abuse.

More Black Men Now in Prison System Than Were Enslaved March 31, 2011 | Like this article? Join our email list: Stay up to date with the latest headlines via email. This article first appeared on LA Progressive. “More African American men are in prison or jail, on probation or parole than were enslaved in 1850, before the Civil War began,” Michelle Alexander told a standing room only house at the Pasadena Main Library this past Wednesday, the first of many jarring points she made in a riveting presentation. Alexander, currently a law professor at Ohio State, had been brought in to discuss her year-old bestseller, The New Jim Crow: Mass Incarceration in the Age of Colorblindness . Growing crime rates over the past 30 years don’t explain the skyrocketing numbers of black — and increasingly brown — men caught in America’s prison system, according to Alexander, who clerked for Supreme Court Justice Harry Blackmun after attending Stanford Law. “What do we expect them to do?” So it’s like America’s current war addiction.

Inmates use technology to organize state prison protest   At least four Georgia prisons were locked down Monday for the fifth-straight day as inmates continue a work-stoppage in protest of conditions. Department of Corrections spokeswoman Peggy Chapman said there had been no “major incidents or issues” reported at any of the four prisons that continue to be locked down, nor at any of the state's other 26 facilities. Inmate advocates and relatives say, however, that heat and hot water have been turned off at some prisons and that there have been some physical confrontations between prisoners and guards. Corrections officials said the prisons on lockdown are Hays State Prison in Trion, Macon State Prison in Oglethorpe, Telfair State Prison in Helena and Smith State Prison in Glennville. However, advocates said inmates, at times, have shut down all activity at Augusta, Baldwin, Calhoun, Hancock, Hays, Macon, Rogers, Smith, Telfair, Valdosta and Ware state prisons. Chapman, the DOC spokeswoman, said there had been no such confrontations.

School superintendent to Governor: Please make my school a prison | Dangerously Irrelevant A school superintendent in Michigan has written a public letter to the editor asking Governor Rick Snyder if his school can become a prison instead. The full text is below. What do you think? Dear Governor Snyder, In these tough economic times, schools are hurting. And yes, everyone in Michigan is hurting right now financially, but why aren’t we protecting schools? One solution I believe we must do is take a look at our corrections system in Michigan. Consider the life of a Michigan prisoner. This is why I’m proposing to make my school a prison. Please provide for my students in my school district the same way we provide for a prisoner. Respectfully submitted, Nathan Bootz, Superintendent, Ithaca Public Schools Image credit: Bars

White House Drafts Executive Order for Indefinite Detention The Obama Administration has drafted an executive order that calls for regular reviews of the cases against Guantanamo prisoners. It calls for release of prisoners from countries like Yemen should security conditions improve. Dec. 22: This story has been corrected [1] and updated with the White House's response. The White House is preparing an Executive Order on indefinite detention that will provide periodic reviews of evidence against dozens of prisoners held at Guantanamo Bay, according to several administration officials. The draft order, a version of which was first considered nearly 18 months ago, is expected to be signed by President Obama early in the New Year. But the order establishes indefinite detention as a long-term Obama administration policy and makes clear that the White House alone will manage a review process for those it chooses to hold without charge or trial. That is in part because Congress has made it difficult to move detainees to the United States for trial.

Inside the secret industry of inmate-staffed call centers By msnbc.com staff and NBC News Inmates at Greene Correctional Institution in Coxsackie, N.Y., staff a state Department of Motor Vehicles call center. When you call a company or government agency for help, there's a good chance the person on the other end of the line is a prison inmate. The federal government calls it "the best-kept secret in outsourcing" — providing inmates to staff call centers and other services in both the private and public sectors. The U.S. government, through a 75-year-old program called Federal Prison Industries, makes about $750 million a year providing prison labor, federal records show. But the program also markets itself to businesses under a different name, Unicor, providing commercial market and product-related services. The Justice Department and the U.S. In a fact sheet, Unicor asserts that prisoners in the program are less likely to re-offend and are better trained for full-time work upon release. Read the original story at WNYT.com

Prison Rape and the Government by David Kaiser and Lovisa Stannow Sexual Victimization Reported by Adult Correctional Authorities, 2007–2008 by Allen J. Beck and Paul Guerino National Standards to Prevent, Detect, and Respond to Prison Rape: Notice of Proposed Rulemaking by the United States Department of Justice Initial Regulatory Impact Analysis for Notice of Proposed Rulemaking: Proposed National Standards to Prevent, Detect, and Respond to Prison Rape Under the Prison Rape Elimination Act (PREA) Sexual Victimization in Prisons and Jails Reported by Inmates, 2008–09 by Allen J. Back in 1998, Jan Lastocy was serving time for attempted embezzlement in a Michigan prison. Jan wanted to tell someone, but the warden had made it clear that she would always believe an officer’s word over an inmate’s, and didn’t like “troublemakers.” These are a few of the reasons why prisoners fear reporting rape. How many people are really victimized every year? The department divides sexual abuse in detention into four categories. He missed that deadline.

Mass Incarceration and Criminal Justice in America A prison is a trap for catching time. Good reporting appears often about the inner life of the American prison, but the catch is that American prison life is mostly undramatic—the reported stories fail to grab us, because, for the most part, nothing happens. One day in the life of Ivan Denisovich is all you need to know about Ivan Denisovich, because the idea that anyone could live for a minute in such circumstances seems impossible; one day in the life of an American prison means much less, because the force of it is that one day typically stretches out for decades. That’s why no one who has been inside a prison, if only for a day, can ever forget the feeling. For most privileged, professional people, the experience of confinement is a mere brush, encountered after a kid’s arrest, say. The scale and the brutality of our prisons are the moral scandal of American life.

Secret Experimental Prisons Subject Inmates to Drastic Isolation | Investigations March 16, 2011 | Like this article? Join our email list: Stay up to date with the latest headlines via email. The following article first appeared in the Nation. On the evening of May 13, 2008, Jenny Synan waited for a phone call from her husband, Daniel McGowan. It was only days later that Jenny heard from a friend that Daniel was in transit, his destination Marion, Illinois. By May 16 the inmate locator on the Federal Bureau of Prisons (BOP) website showed Daniel in a variety of places, including a federal correctional facility in Terre Haute, Indiana. Finally on June 12, one month after their missed call, Daniel telephoned Jenny. But Jenny couldn’t find much. There was, in fact, little to be found; the Bush administration had quietly opened the CMUs in Terre Haute and Marion in December 2006 and March 2008, respectively, circumventing the usual process federal agencies normally follow that subjects them to public scrutiny and transparency.