Related Articles: School problems. Related articles: Languages in Schools. Robber and rapist top matric performers among inmates:Wednesday 7 January 2015. The number of prisoners who sat for their matric exams both full-time and part-time pupils in 2014 was 185. 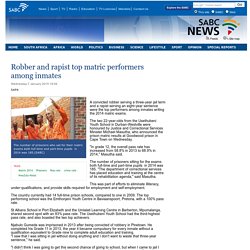 (SABC) A convicted robber serving a three-year jail term and a rapist serving an eight-year sentence were the top performers among inmates writing the 2014 matric exams. Inmates seek govt assistance for life after prison:Tuesday 14 April 2015. Living conditions and security issues were raised, but the elephant in the room was life after the steel bars. 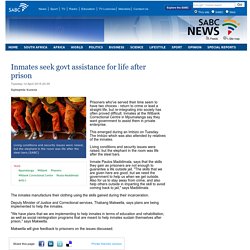 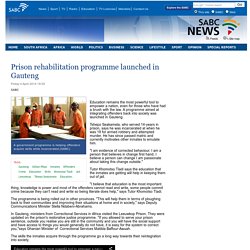 (SABC) Education remains the most powerful tool to empower a nation, even for those who have had a brush with the law. A programme aimed at integrating offenders back into society was launched in Gauteng. Tshepo Seakamela, who served 14-years in prison, says he was incarcerated at when he was 19 for armed robbery and attempted murder. He has since passed matric and currently motivates other inmates to emulate him. "I am evidence of corrected behaviour. Tutor Khomotso Tladi says the education that the inmates are getting will help in keeping them out of jail. "I believe that education is the most important thing, knowledge is power and most of the offenders cannot read and write, some people commit crime because they can't read and write so being literate does help," says Tutor Khomotso Tladi.

The programme is being rolled out in other provinces. Western Cape parolees receive work tools to start business:Thursday 20 February 2014. Department of Correctional Services is working to keep parolees out of prison. 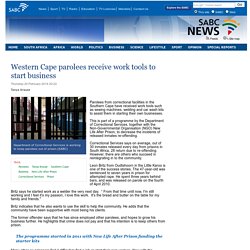 (SABC) Parolees from correctional facilities in the Southern Cape have received work tools such as sewing machines, welding and car wash kits to assist them in starting their own businesses. This is part of a programme by the Department of Correctional Services, together with the Non-Governmental Organisation (NGO) New Life After Prison, to decrease the incidents of released inmates re-offending. Correctional Services says on average, out of 30 inmates released every day from prisons in South Africa, 28 return due to re-offending. However, there are others who succeed in reintegrating in to the community. Leon Britz from Oudtshoorn in the Little Karoo is one of the success stories. Britz says he started work as a welder the very next day. “ From that time until now, I'm still working and I feel it's my passion, I love this work. Britz indicates that he also wants to use the skill to help the community.

Prisoners register for educational programmes: Ndebele:Sunday 19 January 2014. The department has increased the number of full time correctional centre schools from one in 2009 to 12 in 2013. 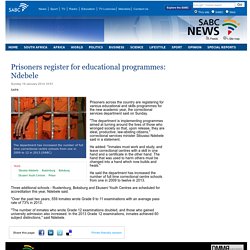 (SABC) Prisoners across the country are registering for various educational and skills programmes for the new academic year, the correctional services department said on Sunday. "The department is implementing programmes aimed at turning around the lives of those who wronged society so that, upon release, they are ideal, productive, law-abiding citizens," correctional services minister Sibusiso Ndebele said in a statement. He added: "Inmates must work and study, and leave correctional centres with a skill in one hand and a certificate in the other hand. 79.25% pass matric in prison:Sunday 6 January 2013. Correctional Services Minister Sibusiso Ndebele(SABC) A total of 79.25% of prisoners who wrote National Senior Certificate examinations passed in 2012, the Correctional Services department said today. 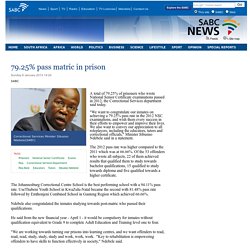 "We want to congratulate our inmates on achieving a 79.25% pass rate in the 2012 NSC examinations, and wish them every success in their efforts to empower and improve their lives. We also want to convey our appreciation to all roleplayers, including the educators, tutors and correctional officials," Minister Sibusiso Ndebele said in a statement. The 2012 pass rate was higher compared to the 2011 which was at 66.66%. Of the 53 offenders who wrote all subjects, 22 of them achieved results that qualified them to study towards bachelor qualifications, 15 qualified to study towards diploma and five qualified towards a higher certificate. The Johannesburg Correctional Centre School is the best performing school with a 94.11% pass rate. Prisoners to get compulsory education:Thursday 18 October 2012.

Inmates urged to use their skills to develop communities:Sunday 6 May 2012. Prisons at a correctional services centre. 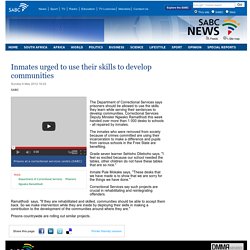 (SABC) The Department of Correctional Services says prisoners should be allowed to use the skills they learn while serving their sentences to develop communities. Correctional Services Deputy Minister Ngwako Ramatlhodi this week handed over more than 1 000 desks to schools - all repaired by inmates. The inmates who were removed from society because of crimes committed are using their incarceration to make a difference and pupils from various schools in the Free State are benefiting. Grade seven learner Sehloho Diteboho says, "I feel so excited because our school needed the tables, other children do not have these tables that are so nice. " Inmate Pule Mokake says, "These desks that we have made is to show that we are sorry for the things we have done. " Correctional Services say such projects are crucial in rehabilitating and reintegrating offenders. 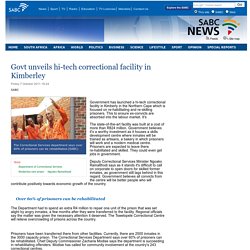 (SABC) Government has launched a hi-tech correctional facility in Kimberly in the Northern Cape which is focused on re-habilitating and re-skilling prisoners. This to ensure ex-convicts are absorbed into the labour market. It's The state-of-the-art facility was built at a cost of more than R824 million.