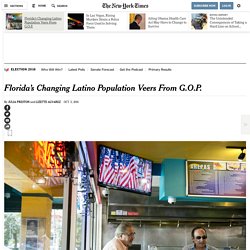 Miami was the undisputed capital of Cuban exiles who had fled the Communist government — they were most of the state’s Latinos — and by the 1980s a large majority had registered with the . But a glimpse at the state voter rolls these days, where the names Samuel Del Valle, Maria Flores and Oswaldo Muñoz all appear as Democrats or independents, makes clear how much has changed in one of the nation’s most important swing states, one that will be important for Hillary Clinton and Donald J. Trump in November. In March, Mr. Del Valle, newly arrived from Puerto Rico, stood in front of a voter registration table, staring at the four relatively unfamiliar choices in front of him: Florida , Republican Party of Florida, No Party Affiliation, Minor Party. The Hispanic Factor Articles in this series will look at the diversity of Latino political power and influence ahead of the presidential election. What Republicans Really Have to Do to Win Over Black Voters.

I have an aunt, now in her 70s, who announced to the entire family during a holiday dinner that she would “slap the shit out of” anyone who voted Republican. 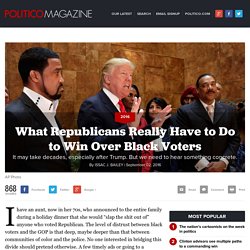 The level of distrust between black voters and the GOP is that deep, maybe deeper than that between communities of color and the police. No one interested in bridging this divide should pretend otherwise. A few timely ads or going to a conservative black church, as Donald Trump seems to be planning, or co-opting the arguments made by black activists who sincerely want to see more progress won’t be enough. Story Continued Below Strengthening the Voting Rights Act—when George W. Clinton isn’t doing better than previous Democrats with Latinos — even against Trump. In a presidential year expected to produce record turnout among Hispanic voters, there are few signs that Hillary Clinton is performing any better among Latinos than past Democratic presidential candidates — even with immigrant-bashing Donald Trump as her GOP opponent. 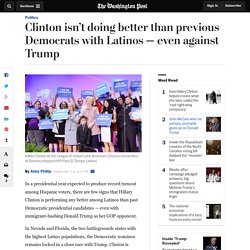 In Nevada and Florida, the two battlegrounds states with the highest Latino populations, the Democratic nominee remains locked in a close race with Trump. Clinton is polling about the same as Democrats in previous contests among Latinos nationally, apparently gaining no ground from Trump’s historic unpopularity.

The close polls in Nevada and Florida have prompted Clinton’s allies to begin spending money in those states targeting Hispanic voters. The campaign itself will also begin airing Spanish-language ads in battleground states after Labor Day. Lorella Praeli is Hillary Clinton’s Latino vote director. American Indians are less likely to claim identification with major American political parties. Much has been written recently about the partisan preferences of Hispanics and Asians, but the political orientations of Native Americans are less well understood. 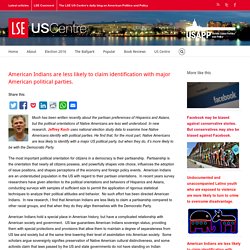 In new research, Jeffrey Koch uses national election study data to examine how Native Americans identify with political parties. How popular is Trump with Hispanic voters? Donald Trump has promised to build a wall along the southern border. 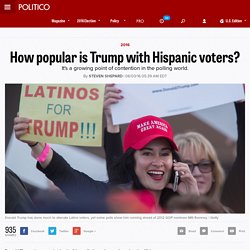 He’s referred to Mexican immigrants as rapists and criminals. He's attacked the Republican Hispanic governor of New Mexico. He’s done much to alienate Latino voters since entering the presidential race, yet according to some polls he’s running ahead of 2012 GOP nominee Mitt Romney among them. Story Continued Below Trump and his surrogates frequently cite online NBC News/SurveyMonkey polls that have Trump winning just under a third of the Hispanic vote, more than Romney’s 27-percent performance against President Barack Obama. 'El Viejito' for president: why Latinos in Nevada are switching to Bernie Sanders. Liberal Hispanic activists assail Rubio, Cruz as ‘traitors’ to their culture. Liberal Hispanic groups have launched a new campaign designed to turn Latino voters against the two Cuban American Republicans who have risen to the top tier of the GOP presidential field — assailing Marco Rubio and Ted Cruz as traitors to their own culture. 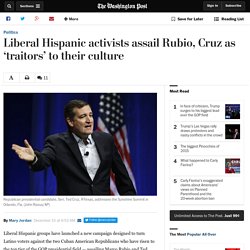 The GOP’s identity-politics crisis: Holding race-card aces but loath to play them. Juan Rodriguez, a Colombian immigrant and Republican businessman in Des Moines, is on a mission to persuade his employees, nearly all Hispanic Democrats, to elect a president from what they think of as the party of white guys. 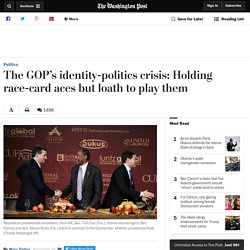 This year, with three minorities among the top four GOP contenders, Rodriguez thought he had a shot. “You are against abortion, yes? Against same-sex marriage, yes?” Hillary Clinton’s economic ideas would be big for Latinos. That’s no coincide... Getty Images On Monday morning, Hillary Clinton laid out how she would narrow economic inequality and deal with the economic struggles of ordinary Americans. 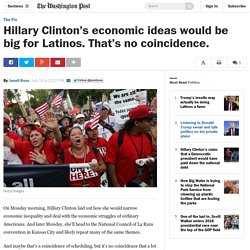 And later Monday, she'll head to the National Council of La Raza convention in Kansas City and likely repeat many of the same themes. California is now the second state in which Hispanics outnumber whites. New annual estimates released by the Census Bureau last month confirm that a long-expected California milestone has arrived: There are now officially more Hispanic residents of the state than white ones. 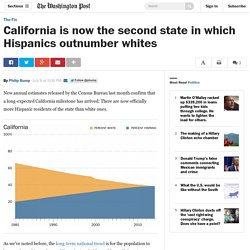 As we've noted before, the long-term national trend is for the population to become less white and more Hispanic. (And older and less religious.) California is at the front end of that demographic shift. Demographers in the state expect California to be nearly half Hispanic by 2060, according to the Los Angeles Times. Share of counties where whites are a minority has doubled since 1980. Last week’s Census Bureau release of 2014 population estimates confirms that the U.S. is becoming ever more diverse, at the local level as well as nationally. 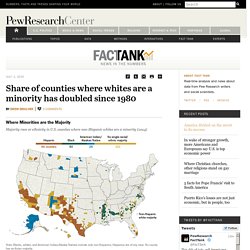 As of last summer, according to a Fact Tank analysis, 364 counties, independent cities and other county-level equivalents (11.6% of the total) did not have non-Hispanic white majorities – the most in modern history, and more than twice the level in 1980.