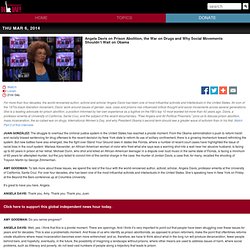 From the Obama administration’s push to reform harsh and racially biased sentencing for drug offenses to the recent decision by New York state to reform its use of solitary confinement, there is a growing momentum toward rethinking the system. But new battles have also emerged, like the fight over Stand Your Ground laws in states like Florida, where a number of recent court cases have highlighted the issue of racial bias in the court system. Marissa Alexander, an African-American woman of color who fired what she says was a warning shot into a wall near her abusive husband, is facing up to 60 years in prison at her retrial. AMY GOODMAN: To talk more about these issues, we spend the rest of the hour with the world-renowned author, activist, scholar, Angela Davis, professor emerita at the University of California, Santa Cruz. PBS FRONTLINE: Prison State (2014. The Challenge of Mass Incarceration in America - American Academy of Arts & Sciences.

The United States penal population has grown every year for the past thirty-six years. 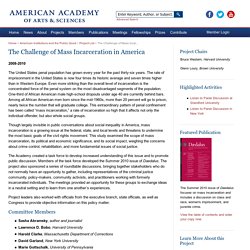 The rate of imprisonment in the United States is now four times its historic average and seven times higher than in Western Europe. Even more striking than the overall level of incarceration is the concentrated force of the penal system on the most disadvantaged segments of the population. One-third of African American male high-school dropouts under age 40 are currently behind bars. Among all African American men born since the mid-1960s, more than 20 percent will go to prison, nearly twice the number that will graduate college.

Mass Imprisonment and Public Health. Photo When public health authorities talk about an epidemic, they are referring to a disease that can spread rapidly throughout a population, like the flu or tuberculosis. 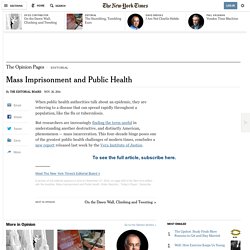 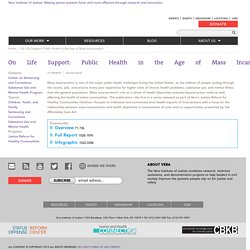 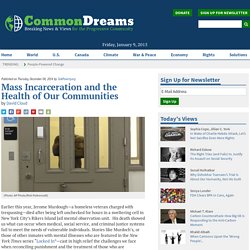 His death showed us what can occur when medical, social service, and criminal justice systems fail to meet the needs of vulnerable individuals. Stories like Murdoch’s, or those of other inmates with mental illnesses who are featured in the New York Times series “Locked In”—cast in high relief the challenges we face when reconciling punishment and the treatment of those who are incarcerated, especially people with mental illness. This is not an issue unique to New York City. Across the country, people with mental health needs are too often warehoused in overcrowded, chaotic, and violent correctional facilities rather than treated in the community.

Mass Incarceration: A Public Health Epidemic. Erin Shigekawa, MPH, Health Policy Fellow at the Center for Healthcare Research and Transformation Posted: Tuesday, December 23, 2014, 9:34 AM We’re number one; and that’s not a good thing. 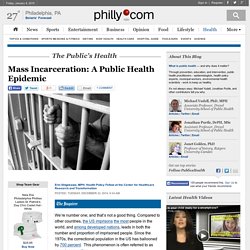 SPATIAL INFORMATION DESIGN LAB. The United States currently has more than 2 million people locked up in jails and prisons. 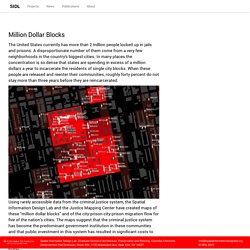 A disproportionate number of them come from a very few neighborhoods in the country’s biggest cities. The Sentencing Project Home. Involuntary Treatment Civil Commitment Standards. State-by-State Standards for Involuntary Commitment (Assisted Treatment) Important note: Having a law, does not mean a state makes use of it. 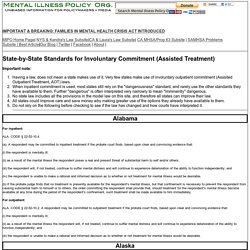 Very few states make use of involuntary outpatient commitment (Asssited Outpatient Treatment, AOT) laws. When inpatient commitment is used, most states still rely on the "dangerousness" standard, and rarely use the other standards they have available to them. Further "dangerous" is often interpreted very narrowly to mean "imminently" dangerous.

Inc_Too_Good_to_be_True. University of Chicago - SSA. An End to Mass Incarceration For Matthew Epperson, the problem is clear, even though he knows that forging the path to solutions won’t be easy. 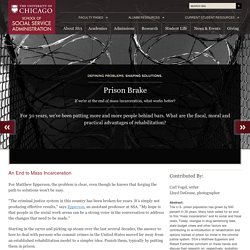 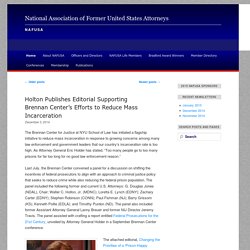 Daniels has been elected as Krieg DeVault’s new Managing Partner. Daniels begins her three-year term effective January 1, 2015. Krieg DeVault has grown from about 35 attorneys based in Indianapolis in 1991 to a firm of 150 professionals with offices in various parts of Indiana and four other states.