Beyoncé and Kendrick Take ‘FREEDOM’ to a New Level. Librarian Creates #BlackLivesMatter Booklist for Teens. In the wake of the tragic killings of two black men by police this week, Alton Sterling and Philando Castile, librarians around the country have been looking for ways to support and educate their communities. 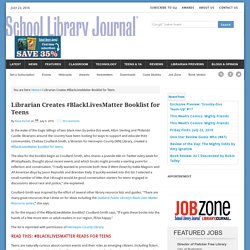 Chelsea Couillard-Smith, a librarian for Hennepin County (MN) Library, created a #BlackLivesMatter booklist for teens. The idea for the booklist begin as Couillard-Smith, who shares a juvenile title on Twitter every week for #FridayReads, thought about recent events and which books might provide a starting point for reflection and conversation. “I really wanted to promote both How It Went Down by Kekla Magoon and All American Boys by Jason Reynolds and Brendan Kiely. It quickly evolved into this list. I selected a small number of titles that I thought would be good conversation starters for teens engaged in discussions about race and justice,” she explained. Couillard-Smith was inspired by the effort of several other library resource lists and guides. Royce Mann, Age 14, "White Boy Privilege", Slam Poem.

Dealing With Casual Bias in Polite Company - The Brian Lehrer Show - WNYC. “Do people ever tell you that you look just like everyone on [Fresh Off the Boat]?” 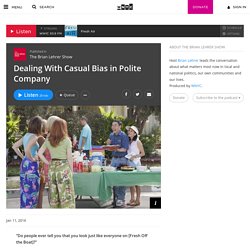 Every minority has fielded some version of that comment, writes Nicole Chung, Managing Editor of The Toast, in a recent essay called, "What Goes Through Your Mind: On Nice Parties and Casual Racism. " In it, she describes being confronted with this question by a stranger at a dinner party, and her stunned and unsatisfying reaction. The experience made her wonder: is anyone else noticing this? Google's New Diversity Stats Are Only Slightly Less Embarrassing Than They Were Last Year. Around this time last year, Google shocked Silicon Valley by voluntarily releasing statistics on the diversity of its workforce. 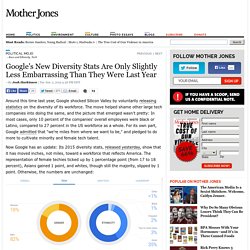 The move helped shame other large tech companies into doing the same, and the picture that emerged wasn't pretty: In most cases, only 10 percent of the companies' overall employees were black or Latino, compared to 27 percent in the US workforce as a whole. For its own part, Google admitted that "we're miles from where we want to be," and pledged to do more to cultivate minority and female tech talent. White Privilege Explained in One Simple Comic. By Jamie Kapp / everydayfeminism.com White privilege can be a tricky thing for people to wrap their heads around. 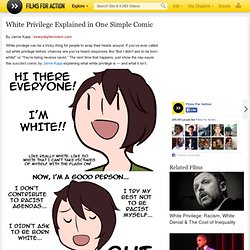 If you’ve ever called out white privilege before, chances are you’ve heard responses like “But I didn’t ask to be born white!” Or “You’re being reverse racist.” The next time that happens, just show the nay-sayer this succinct comic by Jamie Kapp explaining what white privilege is — and what it isn’t. Eric Clapton's Racist Rant. I was shocked to recently come across this racist rant, allegedly made onstage by a heavily intoxicated Eric Clapton during a concert in Birminghan, UK, following the British anti-immigration Conservative MP, Enoch Powell’s “Rivers Of Blood” speech back in 1976. 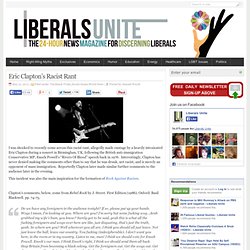 Interestingly, Clapton has never denied making the comments other than to say that he was drunk, not racist, and is merely an opponent of mass immigration. Reportedly Clapton later made similar further comments to the audience later in the evening. This incident was also the main inspiration for the formation of Rock Against Racism. Clapton’s comments, below, come from Rebel Rock by J. Street. White out. YouTube Reaches 1 Trillion Racist Comments. SAN BRUNO, CA—The Silicon Valley headquarters of YouTube reportedly erupted in cheers shortly after 10 a.m. local time Thursday as the popular video-sharing service celebrated the 1 trillionth racist comment posted to its website. 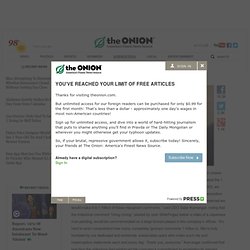 “When we created YouTube back in 2005, we knew it had the potential to revolutionize the way people make highly offensive and insensitive remarks based purely on a stranger’s racial or ethnic characteristics, but we never dreamed we would make it to 1 trillion of these repugnant comments,” said CEO Salar Kamangar, noting that the milestone comment “ching chong,” posted by user StinkFingaz below a video of a Japanese man painting, would be commemorated on a large bronze plaque in the company’s offices. For Your Women’s History Month: Loretta Ross on the Origin of “Women of Color” By Sexual Correspondent Andrea (AJ) Plaid Full disclosure: I met Loretta Ross at a Women’s Media Center’s media workshop for progressive women last summer, and we’re connected through the New York City chapter of SisterSong, which reshaped the reproductive-rights fight to reproductive justice. 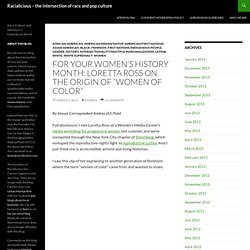 And I just think she is an incredible activist and living historian. I saw this clip of her explaining to another generation of feminists where the term “women of color” came from and wanted to share. Transcript after the jump. Loretta Ross: Y’all know where the term “women of color” came from? In 1977, a group of Black women from Washington, DC, went to the National Women’s Conference, that [former President] Jimmy Carter gave $5million to have as part of the World Decade for Women.