Crafting an Elevator Pitch - Communications Skills From MindTools.com. To familiarize our MYP students with the MYP design cycle, we had them do an awesome and creative project. 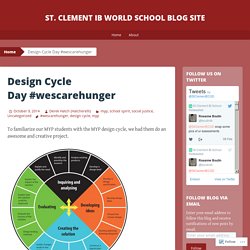 This is the project that was given to our MYP homeroom teachers (this is not all of the information, just highlights): Thursday October 9th is Design Cycle Day for Grades 6 – 9! This year we are connecting the design cycle with WE scare Hunger. Students will be working through the steps of the design cycle and developing collaboration skills while promoting awareness of the We Scare Hunger event.Break your class into groups to come up with ideas about “the coolest thing you can create using food bank item!” ** Please note that your creation should relate to promoting awareness of hunger.As a class, decide on the idea that they would like to proceed with while documenting each stage of the design cycle.Each class needs to prepare a presentation (video, pictures, verbally) that articulates the final steps of the design cycle – REFLECT AND EVALUATE. 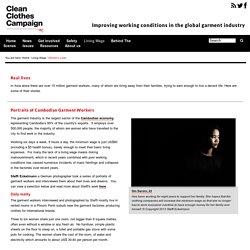 It employs over 500,000 people, the majority of whom are women who have travelled to the city to find work in the industry. Working six days a week, 8 hours a day, the minimum wage is just US$80 (including a $5 health bonus), barely enough to meet their basic living expenses. Bangladesh Factory Worker Discusses Horrible Working Conditions. Mushamat Sokina Begum, 27, was at her sewing machine in a fifth-floor factory when the Rana Plaza building where she worked in Savar near the Bangladeshi capital of Dhaka collapsed on the morning of April 24, killing over 1,000 people. 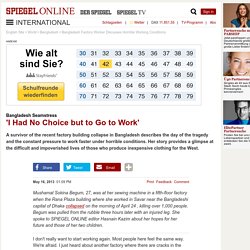 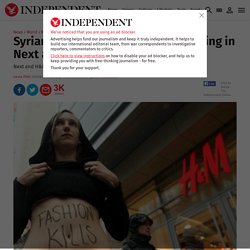 H&M and Next were the only retailers that admitted to identifying child labour in supplier factories in Turkey, but there are fears that the phenomenon could be far more widespread after several other companies failed to answer questions on the use of Syrian workers in their factories. Along with China, Cambodia and Bangladesh, Turkey is one of the largest producers of clothing sold on the British high street, supplying labels that include Topshop, Burberry, Marks & Spencer and Asos. The country is also the world’s largest host of Syrian refugees, accepting more than 2.5 million people who have fled the conflict since 2011.

Refugee crisis - in pictures Hundreds of thousands of Syrian adults in Turkey work for low pay far below the minimum wage of 1,300 Turkish lira (£309) per month. Shell in Nigeria: Dutch court to rule in pollution case. Image copyright AFP Four Nigerian farmers are due to hear whether their case against Dutch oil giant Shell has been successful. 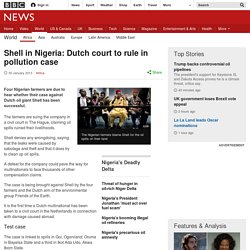 The farmers are suing the company in a civil court in The Hague, claiming oil spills ruined their livelihoods. Shell denies any wrongdoing, saying that the leaks were caused by sabotage and theft and that it does try to clean up oil spills. Niger delta oil spill clean-up launched – but could take quarter of a century. A $1bn clean-up of one of the world’s most oil-polluted regions will be officially launched on Thursday by the Nigerian president, Muhammadu Buhari. 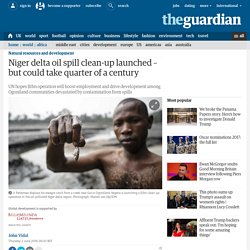 But it will be at least 18 months before full remedial work starts in Ogoniland in the Niger delta, and possibly 25 years before all the swamps, creeks, fishing grounds and mangroves are restored after decades of spills by Shell, the national oil firm and other oil companies. According to agreements signed last year in Abuja, $200m (£139m) will be spent annually for five years to clear up the devastated 1,000 sq mile (about 2,600km2) region in Rivers state near Port Harcourt. More money may be needed to restore the ecosystem fully.

The plan, devised by UN engineers, oil companies and the government, will involve building a factory to process and clean tens of thousands of tonnes of contaminated soil. Shell's false claims on Nigeria oil spills. Oil spills in Nigeria: The true price of crude oil. Broadcast Yourself. Shell companies in Nigeria: Over 50 years of operations. Contemporary Marketing and Its Effect on Society in the 21st Century. Full Title: Marketing & Society. 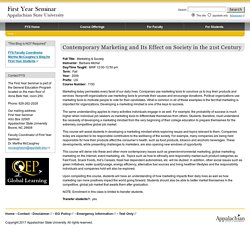 Multinational Corporations in the Third World: Predators or Allies in Economic Development? Multinational corporations (MNCs) engage in very useful and morally defensible activities in Third World countries for which they frequently have received little credit. 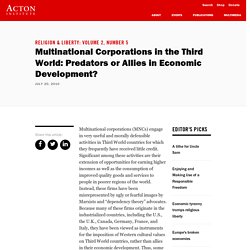 Significant among these activities are their extension of opportunities for earning higher incomes as well as the consumption of improved quality goods and services to people in poorer regions of the world. Instead, these firms have been misrepresented by ugly or fearful images by Marxists and “dependency theory” advocates. Because many of these firms originate in the industrialized countries, including the U.S., the U.K., Canada, Germany, France, and Italy, they have been viewed as instruments for the imposition of Western cultural values on Third World countries, rather than allies in their economic development. The Marketing Department's Influence on Society.

Corporations. Author and Page information by Anup ShahThis Page Last Updated Monday, January 07, 2013 As the world starts to globalize, it is accompanied by criticism of the current forms of globalization, which are feared to be overly corporate-led. 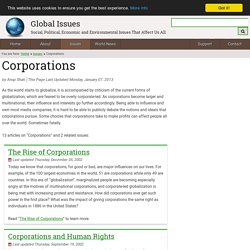 As corporations become larger and multinational, their influence and interests go further accordingly. Being able to influence and own most media companies, it is hard to be able to publicly debate the notions and ideals that corporations pursue. Negative effect of media on girls. Do thin models warp girls' body image? By Nanci Hellmich, USA TODAY When Frederique van der Wal, a former Victoria's Secret model, attended designers' shows during New York's Fashion Week this month, she was "shocked" by the waiflike models who paraded down the catwalk. 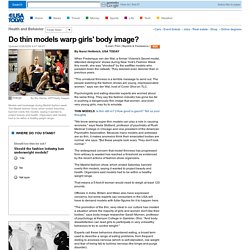 They seemed even skinnier than in previous years. "This unnatural thinness is a terrible message to send out. The people watching the fashion shows are young, impressionable women," says van der Wal, host of Cover Shot on TLC. Oreo Surprises 26 Million Facebook Fans With Gay Pride Post, Sparking Backlash and Support.

Oreo is widely known to be one of the most successful brands on Facebook, but tonight the brand proved it could be one of the boldest, too. Around 8 p.m. Eastern, Oreo posted a gay-pride-themed picture featuring a six-layer cookie colored like a rainbow, with “June 25” and the word “Pride.” Theory and Applications of Microeconomics - Table of Contents. This is the table of contents for the book Theory and Applications of Microeconomics (v. 1.0). For more details on it (including licensing), click here. This book is licensed under a Creative Commons by-nc-sa 3.0 license.

See the license for more details, but that basically means you can share this book as long as you credit the author (but see below), don't make money from it, and do make it available to everyone else under the same terms. The Economist explains: Why deflation is bad. PRICES in the euro zone are falling. Figures released on January 7th showed that consumer prices in the year to December fell by 0.2%, marking the return of deflation for the first time since 2009.

Weak demand, driven by austerity, debt and a lack of economic growth is dragging down prices. The falling oil price is making things cheaper, too. One might think falling prices would be something to celebrate. Chair the Fed - Your Job. Your Job The President of the United States has nominated you and the U.S. Senate has confirmed you to serve as the Chair of the Federal Reserve.

Your job is to set monetary policy to achieve full employment and low price inflation. 5e educator springsummer 2013. SNACKS HS slide. UK Monetary Policy. Fiscal Policy. Definition of fiscal policy. Open Textbook Exploring Business. Foodinc PDF 091008. Behind the Veil of Corporate Farming. In Food, Inc., filmmaker Robert Kenner lifts the veil on our nation's food industry, exposing the highly mechanized underbelly that has been hidden from the American consumer with the consent of our government's regulatory agencies, USDA and FDA. The Fortune 2016 Global 500. Companies are ranked by total revenues for their respective fiscal years ended on or before March 31, 2016. All companies on the list must publish financial data and report part or all of their figures to a government agency. Shell in Nigeria: the landmark oil case is a warning shot to multinationals. Negative externalities. Negative externalities A negative externality is a cost that is suffered by a third party as a result of an economic transaction.