Before Trump, Steve King Set the Agenda for the Wall and Anti-Immigrant Politics. The past year of research has made it very clear: Trump won because of racial resentment. More than a year after President Donald Trump won the election, there are still some questions about what drove him to victory: Was it genuine anxiety about the state of the economy? 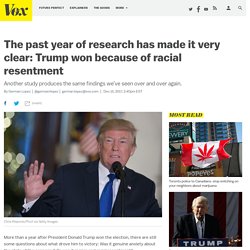 Or was it racism and racial resentment? Over at the Washington Post, researchers Matthew Fowler, Vladimir Medenica, and Cathy Cohen have published the results of a new survey on these questions, with a focus on the 41 percent of white millennials who voted for Trump and the sense of “white vulnerability” that motivated them. The conclusion is very clear: Contrary to what some have suggested, white millennial Trump voters were not in more economically precarious situations than non-Trump voters. Fully 86 percent of them reported being employed, a rate similar to non-Trump voters; and they were 14 percent less likely to be low income than white voters who did not support Trump. Post-Racial or Most-Racial?: Race and Politics in the Obama Era, Tesler. Study: Obama voters switched to Trump because of race. One of the most puzzling elements of the 2016 election, at least for a lot of Americans, was the millions of voters who switched from voting for Barack Obama in 2012 to Donald Trump in 2016. 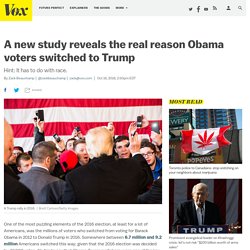 Somewhere between 6.7 million and 9.2 million Americans switched this way; given that the 2016 election was decided by 40,000 votes, it’s fair to say that Obama-Trump switchers were one of the key reasons that Hillary Clinton lost. The existence of those voters has served as evidence that the most plausible explanation for what happened in 2016 — that Trump’s campaign tapped into the racism of white Americans to win pivotal states — is wrong. Choice page. A new study shows that every European country has negative racial bias towards black people. This new map shows how easily white Europeans associate black faces with negative ideas. 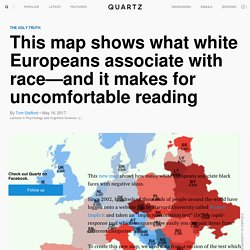 Since 2002, hundreds of thousands of people around the world have logged onto a website run by Harvard University called Project Implicit and taken an “implicit association test” (IAT), a rapid-response task which measures how easily you can pair items from different categories. To create this new map, we used data from a version of the test which presents white or black faces and positive or negative words. The result shows how easily our minds automatically make the link between the categories—what psychologists call an “implicit racial attitude”. Each country on the map is colored according to the average score of test takers from that country. Daily Caller Editor Wrote for Alt-Right Radix Journal. Greer’s day-to-day work was much less controversial at The Daily Caller, which has been a key voice in the conservative online media since its founding by Tucker Carlson and Patel in 2010. 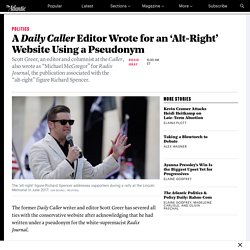 The Caller has published moderate voices and been the springboard for respected reporters, but has had its brushes with controversy. The site backtracked and fired its opinion editor last year after he brought in Yiannopoulos, by then fired from Breitbart due to controversial comments he had made about pedophilia, to write a weekly column. Also last year, the Caller published a piece by Jason Kessler, a white supremacist, about a pro-Confederate monument rally without disclosing that Kessler was involved in the event.

He would later organize the “Unite the Right” rally in Charlottesville that led to the death of a counterprotester. They show Greer discussing his blog being published on Radix and referring to editing other people’s posts there. The Demography of the Alt-Right. Editor's Note: This research brief has been updated by the author with corrected information: only about 6% of white Americans agreed with all three attitudes of white identity politics in the 2016 ANES survey (8/10/18). 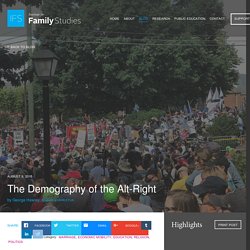 A year ago, the so-called Alt-Right (short for "alternative right" and the latest manifestation of the U.S. white nationalist movement) made international headlines in its infamous "Unite the Right" rally in Charlottesville, VA. The rally led to dozens of serious injuries and the death of one counter-protester. Why is the far right dominated by men? What if male identity, rather than racist ideology, is the most important reason why people join far-right groups? 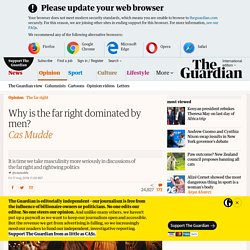 That is the central claim made by Michael Kimmel, a US sociologist, in his new book Healing from Hate: How Young Men Get Into – and Out of – Violent Extremism, which studies why young men join (and leave) extreme right groups in Germany, Sweden and the US. While the central thesis is slightly overstated, the book is remarkably well-written and researched.

Kimmel, a longtime scholar of men and masculinity, fills the book with quotes from his many interviews with so-called “formers”. Almost everyone will have noted that far-right groups and rallies are predominantly male, from the original, deadly Unite the Right rally last year to the pathetic Unite the Right 2 last weekend, but Kimmel is one of the few to have made this the focus of his research. It is tricky to translate insights from smaller, more activist and extreme groups to the broader electorate. The Complex History of the Genes That Color Our Skin. Few human traits are more variable, more obvious, and more historically divisive than the color of our skin. 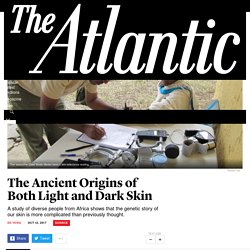 And yet, for all its social and scientific importance, we know very little about how our genes influence its pigment. What we do know comes almost entirely from studying people of European descent. Second Fox News reporter leaves amid objections to network. Another on-air reporter is leaving Fox News over frustrations with the direction and tone of the network, the second in the last three weeks to defect for those reasons. 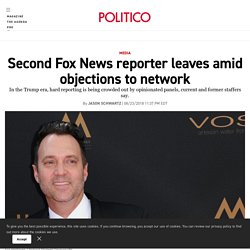 Adam Housley, a Los Angeles-based reporter who joined Fox in 2001, felt there was diminished opportunity at the network for reporters and disapproved of tenor of its on-air discussion, according to two former Fox News employees with knowledge of his situation. Story Continued Below Housley believed that as the network’s focus on Trump has grown — and the number of talking-head panels during news shows proliferated — it had become difficult to get hard reporting on air, according to one of those former employees. Noah Berlatsky : The Trump effect: New study connects white American intolerance and support for authoritarianism. Theroot. White nationalist Richard Spencer's pages just got kicked off Facebook. Here's what you need to know about BuzzFeed's Breitbart bombshell. Here's How Breitbart And Milo Smuggled White Nationalism Into The Mainstream. Jews in Texas Already in Hiding From Neo-Nazis; Holiday Service Held at Secret Location.

There's an apocryphal story from WWII that when the Nazis started requiring the Jews under their control to wear gold stars, the Danish King donned one himself and suggested his subjects do the same. 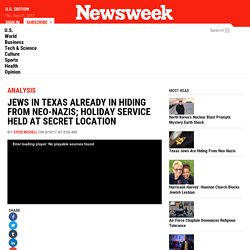 It’s an inspiring story, and it ought to be true, but it is mere folklore in the service of the more mundane historical truth: the Danes saved most of their Jewish population from the Holocaust, but by more conventional methods. Early warning of Germany’s intentions and a negotiated safe passage through Sweden were why nearly 90 percent of the Danish Jews survived the occupation of Denmark. But it is also true that siding with their Jews in 1943 carried substantial risk for the Danes, who had refused since the German invasion of Denmark in 1940—a “war” that took all of two hours—to enact anti-Jewish measures suggested by the occupying forces and gotten away with it because Danes were “Nordic Aryans,” considered capable of governing themselves and offering no threat.

Kristallnacht. Armed Militias Face Off With The 'Antifa' In The New Landscape Of Political Protest. This is FRESH AIR. 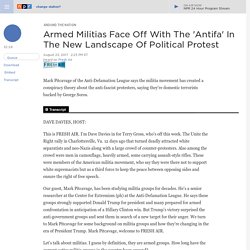 I'm Dave Davies in for Terry Gross, who's off this week. The Unite the Right rally in Charlottesville, Va. 12 days ago that turned deadly attracted white separatists and neo-Nazis along with a large crowd of counter-protesters. Are there white nationalists in the White House? The "Unite the Right" march in Charlottesville has brought the issue of white nationalism to the top of the nation’s agenda -- specifically, whether white nationalists are part of the White House staff. Remarks by liberal commentator Joy-Ann Reid on the Aug. 13 edition of NBC’s Meet the Press crystallized these questions. Reid, the host of MSNBC’s AM Joy, wondered whether Trump’s initial downplaying of white nationalists’ culpability stemmed from alt-right influence among his staff: "Who's writing the talking points that he was looking down and reading from?

Already stuck in a hole, Trump finds a shovel, keeps digging. The Rachel Maddow Show, 8/14/17, 9:00 PM ET Maddow: Racism 'a persistent infection' in white American culture Rachel Maddow looks at the deadly racist violence in Charlottesville, Virginia in the context of other instances of white supremacist violence in the modern era, as well as what makes the weekend’s tragic events unique. All Donald Trump had to do was stop talking. Here’s the Memo That Blew Up the NSC

The memo at the heart of the latest blowup at the National Security Council paints a dark picture of media, academics, the “deep state,” and other enemies allegedly working to subvert U.S. President Donald Trump, according to a copy of the document obtained by Foreign Policy. The seven-page document, which eventually landed on the president’s desk, precipitated a crisis that led to the departure of several high-level NSC officials tied to former National Security Advisor Michael Flynn.

The author of the memo, Rich Higgins, who was in the strategic planning office at the NSC, was among those recently pushed out. The full memo, dated May 2017, is titled “POTUS & Political Warfare.” UW professor: The information war is real, and we’re losing it. A University of Washington professor started studying social networks to help people respond to disasters. But she got dragged down a rabbit hole of twitter-boosted conspiracy theories, and ended up mapping our political moment.

It started with the Boston marathon bombing, four years ago. University of Washington professor Kate Starbird was sifting through thousands of tweets sent in the aftermath and noticed something strange. FBI-led investigative team examines role of conservative news sites in Russia campaign. Federal investigators are examining whether far-right news sites played any role last year in a Russian cyber operation that dramatically widened the reach of news stories — some fictional — that favored Donald Trump’s presidential bid, two people familiar with the inquiry say.

Operatives for Russia appear to have strategically timed the computer commands, known as “bots,” to blitz social media with links to the pro-Trump stories at times when the billionaire businessman was on the defensive in his race against Democrat Hillary Clinton, these sources said. The bots’ end products were largely millions of Twitter and Facebook posts carrying links to stories on conservative internet sites such as Breitbart News and InfoWars, as well as on the Kremlin-backed RT News and Sputnik News, the sources said. Everywhere You Look, Americans Are Spreading Hate. EXCLUSIVE: Nazi-Allied Group Claims Trump Aide Gorka As Member - National. Steve Bannon’s betrayal of Breitbart: White House at “war” with right-wing site over immigration and Trumpcare. More Bomb Threats Close Jewish Community Centers Across The Nation. America's extremist battle: antifa v alt-right. Neo-Nazis Blame "The Jews" For Michael Flynn's Resignation. The Nationalist Right Is Coming for Reince Priebus - The Atlantic.

The White House Put Stephen Miller On Four Sunday Shows To Dodge, Lie, And Attack The Media. Free Speech and the Paradox of Tolerance – Julia Serano – Medium. Trump, Breitbart, and the rejection of multicultural democracy. What you — yes, you — can do to save America from tyranny. M.facebook. Researchers baffled by nationalist surge. Antibody Reduces Harmful Brain Amyloid Plaques in Alzheimer's Patients. Whose Alt-Right Is It Anyway?