Five myths of the private prison industry. America has been fighting an ongoing battle against prison overcrowding for decades now, and the preferred method of treatment has been more prisons. 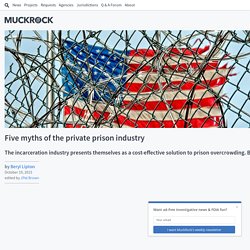 Such a wide reaching problem has always been difficult to tackle, and the symbolic function of punishment repeatedly runs up against its practical elements. Bernie Sanders recently made private prisons a national political issue when he introduced the Justice Is Not For Sale Act into the Senate, but for-profit incarceration, just like America’s inflated prison population, is no new beast. However, it is one with a fine public relations team and a corner of the market seemingly small enough to discount their impact. Or so you’d be led to believe. Let's take a look at the most common myths and misconceptions surrounding the incarceration industry. If you go back to the eighties and nineties, one can make the argument that modern-day behemoths like Corrections Corporations of America or GEO Group Inc. 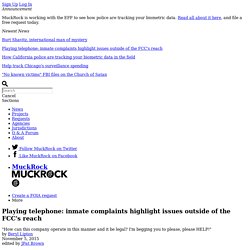 In an effort to relieve exorbitant inmate phone bills incurred by local and in-state contact — a gap unaffected by 2014’s $3.15 cap on 15-minute interstate calls — the newest guidelines place a $1.65 limit on both intra- and interstate phone contact. The regulations are also addressing the assortment of fees companies have attached to most conceivable junctions in the phone account process — deposit fees, auto-payment fees, connection fees, complaint fees.

A recent release of FCC complaints related to inmate calling services captures the confusion and frustration of consumers with often limited resources for the base charges as is. Included are multiple descriptions of mistaken charges, unresponsive companies, and undependable equipment. A New Report Shows How Horrible Life Behind Bars Is for LGBT People. Photo via Flickr user Ken Mayer This article originally appeared on VICE US On Friday, the prison pen pal organization Black & Pink released the results of what is being billing as the largest-ever survey of LGBT people behind bars. 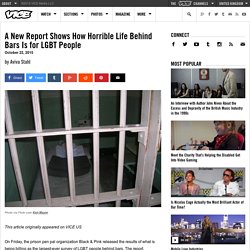 The report, "Coming Out of Concrete Closets," provides a detailed, data-driven account of the experiences of LGBT prisoners—which apparently include endemic physical and sexual violence, limited access to gender-affirming care, and months and even years spent in solitary confinement. Prisons that withhold menstrual pads humiliate women and violate basic rights. Everyone laughed when Piper Chapman emerged from the shower during the first season of Orange Is the New Black with bootleg shoes made of maxi pads – and inmates do sometimes waste precious resources like sanitary products with off-label uses. 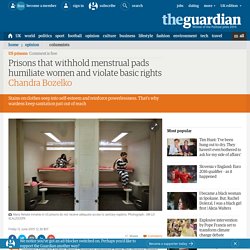 At York Correctional Institution in Niantic, Connecticut, where I spent more than six years, I used the tampons as scouring pads – certainly not as sponges, because prison tampons are essentially waterproof– when I needed to clean a stubborn mess in my cell. That should not lead anyone to think that sanitary products are easy to come by in jail. At York, each cell, which houses two female inmates, receives five pads per week to split. New Plan to Shrink Rikers Island Population: Tackle Court Delays. San Quentin News « The Newspaper of San Quentin Prison. Shadow Prisons. 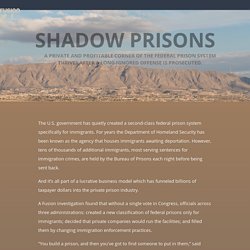 Prison. Prison bankers cash in on captive customers. Megabanks have prison financial services market locked up. Lubricating the system Across the country, jails and prisons are hungry for ways to shift their operational costs onto inmates and their families. 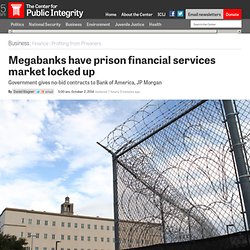 Inmates need money to pay for essentials like toiletries and court fines as well as extras like higher-quality food than what is served in prison cafeterias. Their families often pay high fees to send them the money. Inmates, in turn, pay marked-up prices for items sold at prison stores. Former Los Angeles Deputy: We Beat, Slapped and Tased Inmates Without Provocation. Share Los Angeles County Sheriff’s deputies inspect a cell block at the Men’s Central Jail in downtown Los Angeles. 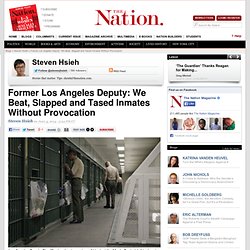 (AP Photo/Reed Saxon, File) An ex-deputy described in federal court Tuesday how he and his colleagues routinely abused inmates at LA County jails and falsified reports to justify their actions, the latest sign of a culture of brutality pervading the county’s jail system. Inmates use technology to organize state prison protest   At least four Georgia prisons were locked down Monday for the fifth-straight day as inmates continue a work-stoppage in protest of conditions. 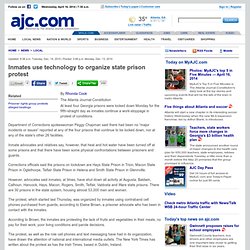 Department of Corrections spokeswoman Peggy Chapman said there had been no “major incidents or issues” reported at any of the four prisons that continue to be locked down, nor at any of the state's other 26 facilities. Inmate advocates and relatives say, however, that heat and hot water have been turned off at some prisons and that there have been some physical confrontations between prisoners and guards. Corrections officials said the prisons on lockdown are Hays State Prison in Trion, Macon State Prison in Oglethorpe, Telfair State Prison in Helena and Smith State Prison in Glennville. However, advocates said inmates, at times, have shut down all activity at Augusta, Baldwin, Calhoun, Hancock, Hays, Macon, Rogers, Smith, Telfair, Valdosta and Ware state prisons. There are 30 prisons in the state system, housing almost 53,000 men and women. Non-Violent Offenses Leads United States to World's Highest Incarceration Rate.

US imprisonment in the "war on terror"

Solitary Confinement in the US. The Way to Stop Prison Rape - The New York Review of Books. As three recent studies by the federal Bureau of Justice Statistics (BJS) show, prisoners are raped with terrible frequency in the United States. 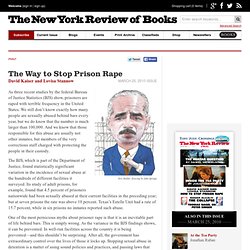 We still don’t know exactly how many people are sexually abused behind bars every year, but we do know that the number is much larger than 100,000. And we know that those responsible for this abuse are usually not other inmates, but members of the very corrections staff charged with protecting the people in their custody. Prison Rape and the Government by David Kaiser and Lovisa Stannow. Sexual Victimization Reported by Adult Correctional Authorities, 2007–2008 by Allen J. 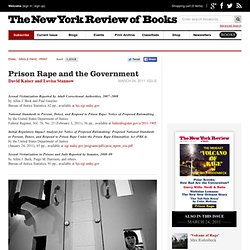 Beck and Paul Guerino National Standards to Prevent, Detect, and Respond to Prison Rape: Notice of Proposed Rulemaking by the United States Department of Justice. U.S. Prison Conditions. "Perpetual state of crisis" at East Mississippi Correctional Facility (EMCF), a for-profit prison. June 24, 2013 The ACLU, the Southern Poverty Law Center, and the Law Offices of Elizabeth Alexander filed a federal lawsuit in May 2013 on behalf of prisoners at the East Mississippi Correctional Facility (EMCF), describing the for-profit prison as hyper-violent, grotesquely filthy and dangerous. EMCF is operated "in a perpetual state of crisis" where prisoners are at "grave risk of death and loss of limbs. " The facility, located in Meridian, Mississippi, is supposed to provide intensive treatment to the state's prisoners with serious psychiatric disabilities, many of whom are locked down in long-term solitary confinement. The Mississippi Department of Corrections, which ultimately bears responsibility for the unconstitutional conditions at ECMF, has known about these conditions for years but failed to protect the health and safety of prisoners.

An American Gulag—The Mentally Ill at Sup... Secret Experimental Prisons Subject Inmates to Drastic Isolation. March 16, 2011 | Like this article? Join our email list: Stay up to date with the latest headlines via email. The following article first appeared in the Nation. Louisiana Incarcerated - NOLA.com. Louisiana prison system. Federal judge rules consent decree only way to fix 'indelible stain' of Orleans Parish Prison. Taking aim at years of violence, rapes, suicides and poor conditions at Orleans Parish Prison, U.S. District Court Judge Lance Africk on Thursday approved a federal consent decree mandating sweeping changes at the jail complex to bring it up to constitutional standards. As a follow-up to Thursday's ruling, Africk will preside over a hearing slated for Monday to determine how much the prison reforms will cost and who will pay for them. By coincidence, New Orleans Inspector General Ed Quatrevaux on Thursday issued a report saying that his investigation of the prison shows the city has been adequately funding its operations and problems there cannot be blamed on a lack of money, as Sheriff Marlin Gusman has claimed.

Dispatch From Detention: A Rare Look Inside Our ‘Humane’ Immigration Jails. Sam Kitching, a soft-spoken, round old man dressed in civilian clothes who works for the Sheriff’s department at the Baker County Jail put his hand on my shoulder and, addressing me as “young man,” said, “It’s very important that you be careful in there. They might have AIDS and might try to grab your hand and push something into it.” “AIDS?” I ask. Torture allegations in North Carolina prison - Charlotte City Buzz. The warden of North Carolina's Central Prison, Warden Gerald J. In Texas, Arguing That Heat Can Be a Death Sentence for Prisoners. Photo. New Mexico driver arrested and forgotten in jail for two years.

Meanwhile, in 2010 alone, the Corrections Corporation of America (CCA) and the GEO Group, the two largest private prison companies, had combined revenues of $2.9 billion. According to a report released today by the Justice Policy Institute (JPI), not only have private prison companies benefitted from this increased incarceration, but they have helped fuel it. 30 Years Later, the Private Prisons Have a Future to Secure. 21st-Century Slaves: How Corporations Exploit Prison Labor. "Voluntary" Work Program Run in Private Detention Centers Pays Detained Immigrants $1 a Day. By the Numbers: The U.S.’s Growing For-Profit Detention Industry. Prison Economics Help Drive Ariz. Immigration Law. The 10 Worst Prisons in America: ADX. Private Prison Company Used in Drug Raids at Public High School. The Shocking Details of a Mississippi School-to-Prison Pipeline.