For Profits and Not For-Profit

Purdue prepares online expansion with support from newly acquired for-profit. Making Scale Matter: The Ultimate Test of the Capella-Strayer Merger - Welcome to Encoura. This has never happened before—the planned merger of Capella Education and Strayer Education, two of the largest for-profit higher education companies in the country, is the first of its kind. 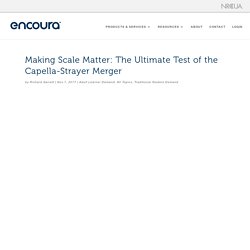 In the past, big for-profit schools have snapped up small ones, some large players have sold off divisions and brands, and this year two giants (Education Management Corporation and Kaplan) announced plans to sell to nonprofits. But the U.S. has never witnessed two big, for-profit schools become one company. Is the merger a sign of strength or weakness for these companies and for-profit higher education? Purdue acquires Kaplan University to create a new public, online university under Purdue brand. Purdue University’s acquisition of Kaplan University is an unexpected tectonic shift in American higher education, revealing both the changing roles of public universities and the dwindling fortunes of for-profit colleges. 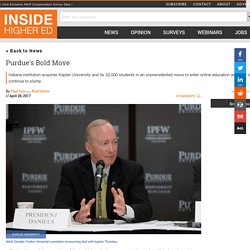 The deal announced Thursday has the Indiana-based public research university acquiring nearly all of the credential-issuing side of Kaplan’s higher education business -- seven schools and colleges that make up Kaplan University, but not its School of Professional and Continuing Education. Roughly 32,000 Kaplan students, 15 campus locations and 3,000 employees are slated to join Purdue under a newly created nonprofit university that will carry some version of Purdue’s name. About 85 percent of Kaplan’s current students are enrolled in fully online programs, with the rest in hybrid ones. The public university will be responsible for virtually no up-front costs in the deal, which is described in a Kaplan corporate filing. Trump or No Trump, Can For-Profit Higher Education Reinvent Itself? - Eduventures. By Richard Garrett, Chief Research Officer The demise of Corinthian Colleges and ITT might be regarded as inevitable churn in a dynamic industry, but it also raises existential questions. 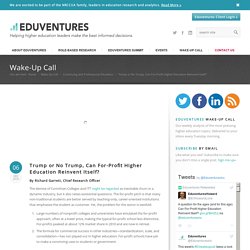 The for-profit pitch is that many non-traditional students are better served by teaching-only, career-oriented institutions that emphasize the student as customer. 4 Things to Know About Online, For-Profit Education. When choosing an online program, Krishna Jackson of La Mesa, California, wanted flexibility, access to a campus and a bachelor's degree in communications. 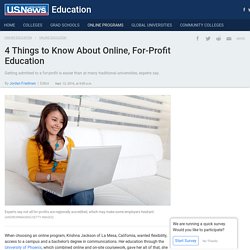 Her education through the University of Phoenix, which combined online and on-site coursework, gave her all of that, she says. While online, for-profit programs face criticism for low graduation rates and questionable recruitment practices, the recent alumna says she was satisfied with her education. "I had to consider a program where I could work and go to school, and I could jump right in," she says. Best Practices Make Perfect. By Jeff Alderson, Principal Analyst This past week, Eduventures was in Washington, D.C. to take part in the annual data summit hosted by the P20W Education Standards Council (PESC). 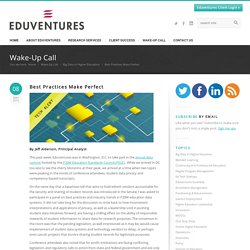 While we arrived in DC too late to see the cherry blossoms at their peak, we arrived at a time when two topics were peaking in the minds of conference attendees: student data privacy and competency-based transcripts. Higher Ed Lobby Quietly Joins For-Profit Schools to Roll Back Tighter Rules. The Obama administration is set to achieve one of its top domestic policy goals after years of wrangling. 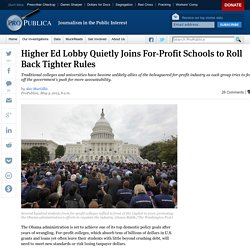 For-profit colleges, which absorb tens of billions of dollars in U.S. grants and loans yet often leave their students with little beyond crushing debt, will need to meet new standards or risk losing taxpayer dollars. But as the July 1 deadline approaches, the troubled industry has been mounting a last-ditch effort to avert or roll back the new rules. And suddenly it’s getting a lift from a set of unlikely allies: traditional colleges and universities. For-profit chains announce a new wave of closures and sell-offs.

The dramatic collapse of Corinthian Colleges isn't the only shake-up happening in for-profit higher education, as a broad swath of the sector is shutting down or selling off campuses after years of declining revenue and enrollment. 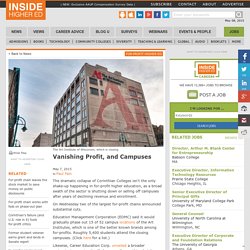 On Wednesday two of the largest for-profit chains announced substantial cuts. Education Management Corporation (EDMC) said it would gradually phase out 15 of 52 campus locations of the Art Institutes, which is one of the better known brands among for-profits. For-profit Kaplan University expands its competency-based offerings with new transcript. Kaplan University will now offer personalized “competency reports” to its 45,000 students. 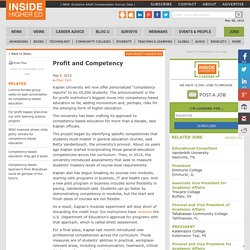 The announcement is the for-profit institution’s biggest move into competency-based education so far, adding momentum and, perhaps, risks for the emerging form of higher education. The university has been crafting its approach to competency-based education for more than a decade, said Kaplan officials. For-profit colleges sue Obama admin over 'irrational' new guidelines. The Association of Private Sector Colleges and Universities, a trade group that represents for-profit colleges, sued the United States Department of Education and Secretary Arne Duncan on Thursday over rules the Obama administration released last week that penalize career training programs for burdening students with massive debt while offering few job prospects. 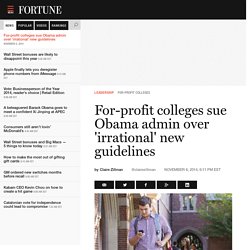 The Education Department last week announced its so-called “gainful employment” rules, which base a program’s access to federal loans on whether the estimated annual loan payment of a typical graduate doesn’t exceed 20% of the student’s discretionary income or 8% of total earnings. The DOE said that programs that exceed those thresholds are at risk of losing their ability to participate in taxpayer-funded federal student aid programs. When it announced the new rule, the DOE estimated that about 1,400 programs serving 840,000 students—99% of whom attend for-profit institutions—would not meet these standards. Alumni split on value of degrees from for-profit colleges. TAMPA — They are largely satisfied with their day-to-day learning experience, but some students who attended for-profit colleges are struggling to answer a key question in higher education: Is it all worth it? 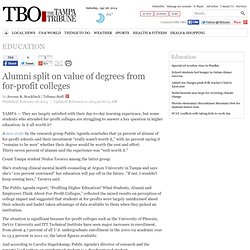 A new study by the research group Public Agenda concludes that 32 percent of alumni of for-profit schools said their investment “really wasn't worth it,” with 30 percent saying it “remains to be seen” whether their degree would be worth the cost and effort. Thirty-seven percent of alumni said the experience was “well worth it.” Count Tampa student Niulca Tavarez among the latter group. She's studying clinical mental health counseling at Argosy University in Tampa and says she's “100 percent convinced” her education will pay off in the future. “If not, I wouldn't keep coming here,” Tavarez said.

On top of the $120,000 she had already borrowed, the Art Institute of Washington, in Arlington, Va., had told her she would need yet another student loan to cover $7,000 in fees that Benbow said were not disclosed to her before. "Since my parents and family have already co-signed my other ridiculous amount of loans, they were denied on this one," Benbow wrote in her letter to the Department of Education. The letter went on to detail other complaints, such as what she said were exaggerations and misrepresentations about job prospects for graduates and equipment that could not be found on campus. She never received an answer. For-profit school plans to cut cost of college degree in half. In the for-profit college sector, bachelor's degrees often cost students two to three times the price of those offered at state universities. Rasmussen College aims to eliminate that competitive advantage with a business degree that could cost less than those offered at its public counterparts. • Topic: Education The Bloomington-based chain's plans for the low-cost alternative program are in the very early stages.

But if it succeeds, by the end of next year Rasmussen will offer what amounts to a $24,000 bachelor's degree. Is Sudden Decline Of For-Profit Colleges Good For Education?